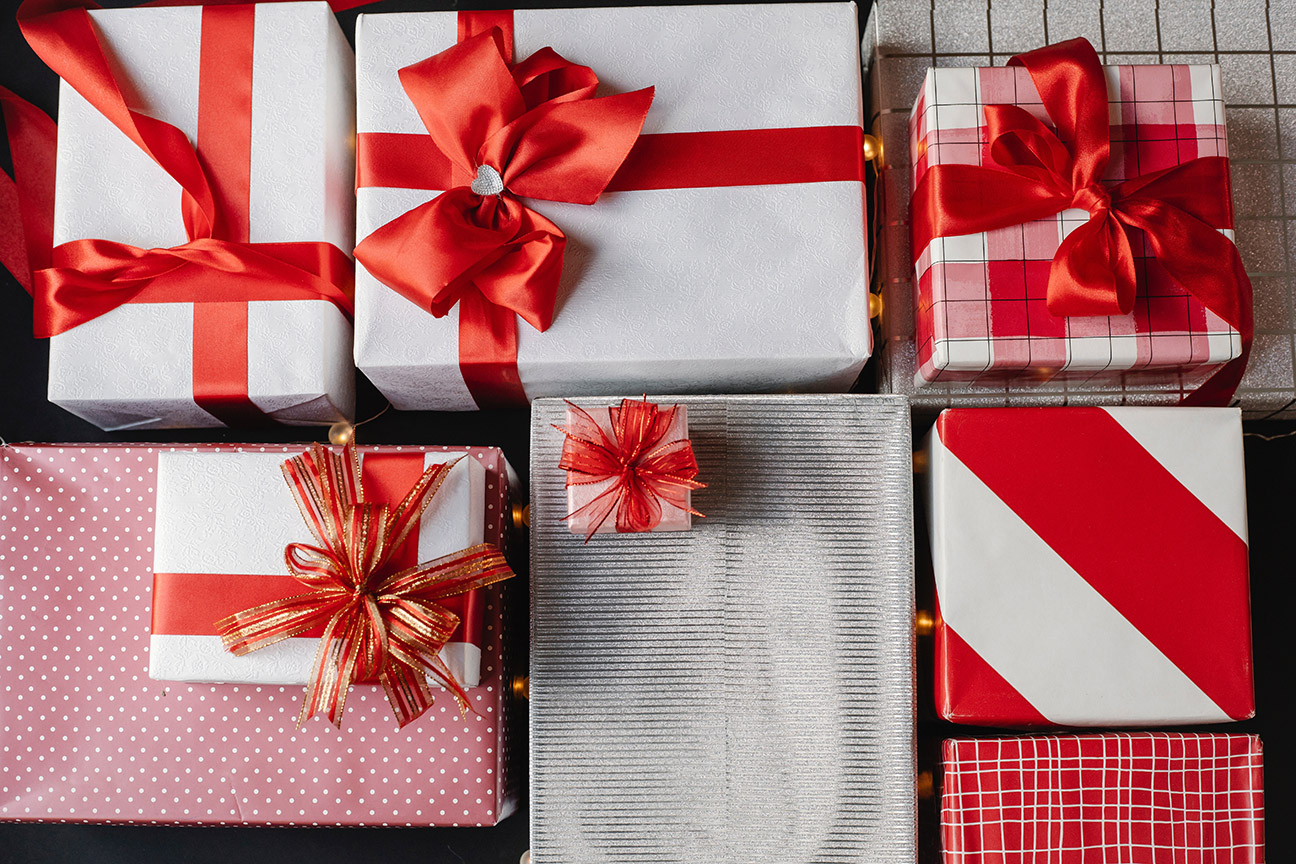 A Gentleman’s Guide
to Gift Wrapping

By Jason Frye  |  Photography courtesy of Laura James from Pexels

Creating the perfectly wrapped gift, clean corners and all, might be a talent of the few.

Show of hands: who among us knows how to properly wrap a gift? This is no “every eye closed, every head bowed” altar call, I want everyone to know if you’re a gift-wrapping master. So, if you can wrap a gift like you grew up in Santa’s workshop, raise your hand.

​When I wrap a gift, it looks like one of three things: 1) a sweater-sized Tootsie Roll, 2) I was assisted by my cat, 3) pretty good on one end and like I gave up on the other. This is surprising as I’m neat in the kitchen (the key is to clean as you go); manage to remain relatively charcoal-, grease-, and sauce-free when making barbecue; and I can even eat ribs without leaving too much of a snack in my mustache. But I cannot wrap a gift to save my life.

​ My father in-law, Bob D, he can wrap a gift. He’s so good at it I think he could give Martha Stewart some pointers.

​My mother in-law, she fills out the name tags and hands him everything — even his own gifts. My wife, well, the apple fell far from the tree as gift wrapping goes. And my brother in-law? Jay is as bad as I am. In fact, for the last 8 or 9 years, he and I have used the same carefully preserved gift bag — emblazoned with a golden retriever in a Santa hat holding a “Merry Christmas” gift bag in its mouth — to swap Amazon gift cards. Anything and everything that looks presentable under the tree was wrapped in the store or by Bob D.

​I used to work for, then with, Bob D. He and my mother in-law retired to the South to escape Connecticut’s winters, and when they did, he thought he left a career as a cabinetmaker behind. After a few months of golf and sun and discovering that the humidity in North Carolina is not something they mention in relocation guides, he reopened the woodshop. He brought me on because I’m good at lifting heavy things and I can read a tape measure, then he taught me the finer points of cabinetmaking from design to cuts to install. So, I figured that if there’s any person who can teach me to wrap a gift, it’s Bob D, the man who kept me from chopping off a finger in the woodshop.

​ As with any lesson, Bob D started off with a demonstration. An intimidating one.

​First, he eyeballed the gift box and the paper, whipped out a pair of scissors and, in one move, cut the paper with laser-guided precision with a 1/4-inch margin on all sides. Then, as if he was part of a pit crew whose driver is half-a-lap down and needs four tires, he grabbed the box and paper and aligned them by the long edge, brought the end of the paper to the center line of the box and wrapped it. I didn’t blink and I missed the whole thing. One second it was just a box and a flat rectangle of paper, but suddenly the gift was 90 percent wrapped. The paper’s crisp and tight and there’s not a wrinkle to be seen and a 1-inch strip of tape holds the whole thing together.

​It was like watching a Three Card Monte dealer.

​Before I can ask how he did that, he spins the box, folds what looks like an impossibly small fringe of paper over itself with two fingers, secures it with his thumb, wraps the bottom up over the now-folded first edge, and — BAM — tapes it shut. Voila, a perfect corner. He spins the gift again and repeats the process and in all of 18 seconds, he’s finished.

​ “Where’s your mother in-law with that name tag?” he asks.

​I say nothing. I don’t understand what happened. Where did the tape come from? Where did he stow the scissors? How did he manage to do this so deftly and dexterously and swiftly?

​ When I tried, I had seven pieces of tape stuck to one hand’s worth of fingers. Two pieces of tape got stuck to the paper prematurely and one ripped a hole in it and I’m sweating because there’s no way I’m wrapping a gift with only five pieces of tape. I fold the paper and it’s slightly out of square and one long edge positively billows with the gap I’ve left, but that’s better than the other edge which has developed a hole and now requires one of my remaining pieces of tape. My ends are no better. Though I was careful with my cut, it’s like I have an extra square foot of wrapping paper and the first end requires some origami-like paper gymnastics to make it work. The other end, oh boy, I’ll just spare you what happened on the other end.

​But does it really matter if half the gifts look like they came from a gift-wrapping professional and everything else is in a gift bag or was wrapped by a pack of preschoolers? I hope not, because everything I’m buying for everyone this year is coming in a bag.