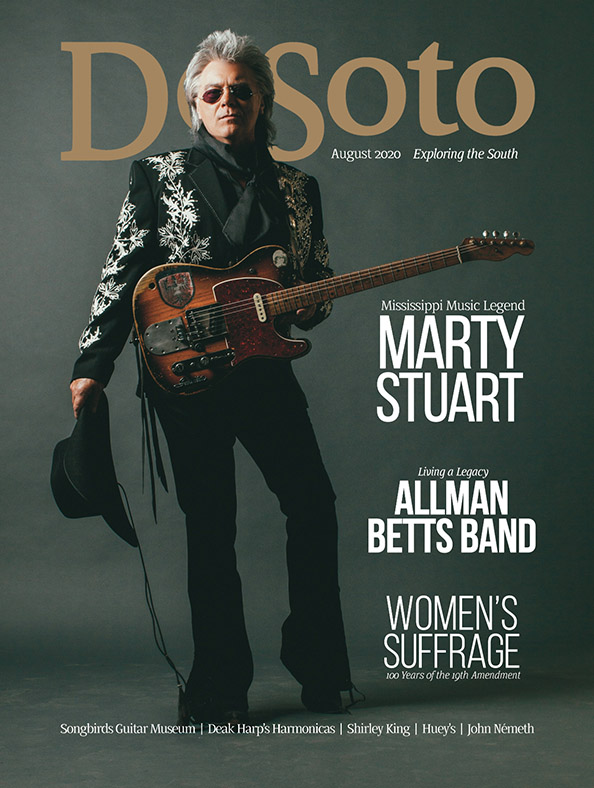 On a recent visit to the Gateway to the Blues Museum in Tunica, surrounded by travel writers from around the United States, one thought struck me. Arguably, most of the music we listen to today has roots in the Mississippi Delta. Sure, we credit the blues and think of that musical genre as a category, but the influences those musicians had on others following behind led to the development of ragtime, jazz, rock ’n’ roll, hip hop, rap, and even country. There’s a reason Mississippi calls itself “The Birthplace of America’s Music.”

Tennessee remains a vital part of the equation as well — labeled “The Soundtrack of America” — with Memphis and Nashville helping to spread America’s indigenous sounds to the world, not to mention Nashville nurturing country music in its many incarnations.

So, we have a lot to celebrate when we examine the South’s musical heritage. In our annual music issue, Pam Windsor nabs an exclusive interview with Mississippi native Marty Stuart, an award-winning singer, songwriter, and multi-instrumentalist who’s establishing the Congress of Country Music cultural center in Philadelphia, Miss. Music writer Jim Beaugez takes us inside the Allman Betts Band, comprised of — you guessed it — family members of the Allman Brothers Band.

Marking an important anniversary this month is the passage of the 19th Amendment, which secured women the right to vote in America. It took 36 states to ratify the amendment and many Southern states voted no. Tennessee tipped the scales, voting for ratification by a close vote, and we have one insistent mother to thank for its passage, who you’ll read about in our third feature story.

Our departments this month showcase organizations that recognize the importance of music. Don’t miss the story about Musicians on Call, which has assembled volunteer musicians to perform in America’s hospitals, believing in the healing power of music. The Nature Conservancy in Tennessee agrees, which is why they have paired musicians with their favorite trees in the “If Trees Could Sing” campaign.

We hope you enjoy our musical issue that includes so much more. Stay safe and cool!