Walk with the Dinosaurs at Sky Lake 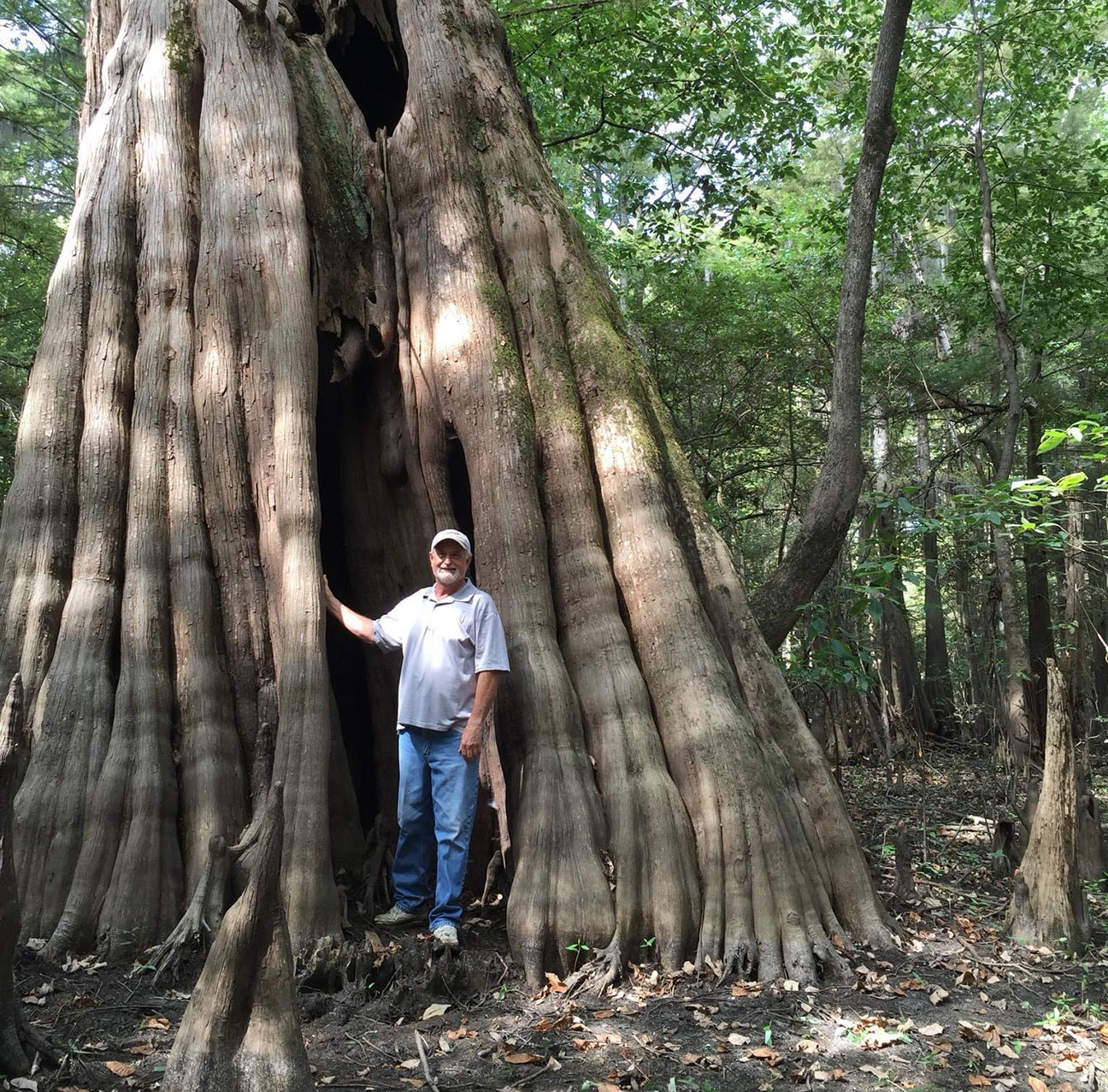 A wildlife management area near Belzoni is home to some of the oldest trees on earth.

It looks like any other path into the woods, until the trees envelop visitors into their ancient world. Giant sentinels have presided over this land for more than a century, some closer to two centuries, witnessing Native Americans at work, watching settlers arrive with saws, trading the shade of fellow trees for sunburnt cotton rows. Traders and hunters, have passed beneath these branches, taking nourishment, fuel, and rest. Then, all went silent, until a group gathered to save the aged remnants of a wild America.

Sky Lake Wildlife Management Area, near Belzoni, Miss., is home to some of the largest and oldest living trees on earth. This 4,273-acre tract contains the largest old-growth cypress forest in the world.

“There are so few places like this left, maybe three or four in the whole country,” says Brian Bellinger, director of the Mississippi Land Trust, one of the groups that saved the swampy forest. “It is so important to preserve it.”

The bald cypress trees and horsetail grass have grown at Sky Lake for so long they have left records of their existence in the fossil record. Both species were likely munched on by dinosaurs in the primeval forest. Cores have been taken from cypress trees to evaluate the droughts and other historic weather events.

More than 7,700 years ago, the mighty Mississippi River meandered through the flood plain of the loam where the Sky Lake bald cypress trees grow. The river used the area as a distributary up until 1,700 years ago – about the time the trees grew past sapling-hood. Native Americans moved nearby about 4,000 years ago and left evidence of their community, called Jaketown.

While the Native Americans might have hollowed out a tree or two for river transportation, the settlers were harder on the ecosystem. They cut trees for wood homes, and some just burned the woods to clear the fields. A few scars from commercial logging remain at Sky Lake, with one ghostly stump reminding us of the men and blades that came before. The bold men who tackled a 30-foot circumference tree used boats and jump boards, literally attaching themselves to the stumps, and sawing by hand.

“They were tougher people than I am,” says Bellinger.

The logging would be tempting to builders. The largest tree, with a 46-foot, 9-inch circumference and a 15-foot diameter, rising to 70 feet, could provide sufficient lumber to build six regular-sized houses.

Fortunately, the remote location of Sky Lake daunted many prospective loggers, resulting in the preservation of the remaining old growth trees. Bellinger described introducing the site to potential boardwalk builders.

“They were all excited,” he says. “But when I walked them up to the site and pointed it out, by the time I turned around, half of them were gone.”

A local contractor built the 1,735-foot boardwalk and the comfort station. Even with local knowledge, a bulldozer and caterpillar tractor sank into the muddy swamp and had to be rescued by heavy hardware.

While tricky to complete, the resulting boardwalk is spectacular, stretching through the swamp and taking visitors 12 feet above the swamp floor. It ends at the giant 15-foot-wide tree, and provides a seat to contemplate the majesty of nature. If the swamp is dry enough, visitors can move closer to the tree, its hollow center deep enough to stand in the middle and look up into the sky. Even with a missing heart, the tree has plenty of green leaves and new branches.

“It is pretty healthy for something that might be 2,000-years-old,” says Jason May, special projects manager for the Mississippi Land Trust.

The bald cypress gets its name from its winter leaf shedding. It holds membership in the long-lived and massive sequoia trees of the West Coast. It can live in the extreme water-today-dry-tomorrow of swamps, and also on dryer land.

The other dominate tree on the site is the water tupelo. Cypress-tupelo swamps are considered one of the most biologically diverse and productive ecosystems in the world. Together, they produce more plant biomass per acre than just about any other forest, all due to the water flushing in fresh nutrients, according to Wildlife Mississippi. Only the Amazon jungles can compete with the Southern swamp for the wide variety of life.

May can reel off dozens of avian species who make Sky Lake home during their life cycles: wood ducks, songbirds, migratory birds, wading birds, the rare least tern, and the flute-like singer, the prothonotary warbler. In spring, Sky Lake teems with tadpoles, followed by frogs. Turtles and snakes can be found here and May is certain that there is “a gator somewhere.” In the dark waters, buffalo carp and gar swim and spawn.

The cypress swamp served the old Mississippi River as a flood plain and flood control because a tree that has reached a foot in diameter can suck up 26 gallons of water per day. A forest of giant cypress trees can quickly lower the water table, alleviating high water damage. The Army Corps of Engineers have planted bottomland hardwoods around the site to recreate the original forest. These hardwoods will prevent contamination and keep sediment from filling in the swamp and lake, preserving it naturally for the long term.

The preservation of the site began with owners Mark and Peggy Simmons, who donated the land for posterity and worked with partners the Mississippi Land Trust, Wildlife Mississippi, the Mississippi Department of Wildlife, Fisheries and Parks and the Yazoo-Mississippi Delta Levee Board.

Today, Sky Lake is free and open to the public. Visitors can walk the boardwalk or kayak and canoe through the swamp. Intriguing in any season, the site is particularly interesting during the spring migrations, when the tadpoles swim, the frogs croak to their mates in the night air, and the trills of the prothonotary warbler pierce the air, joined by the harmony of songbirds celebrating the branches that have received their kind for hundreds of years.