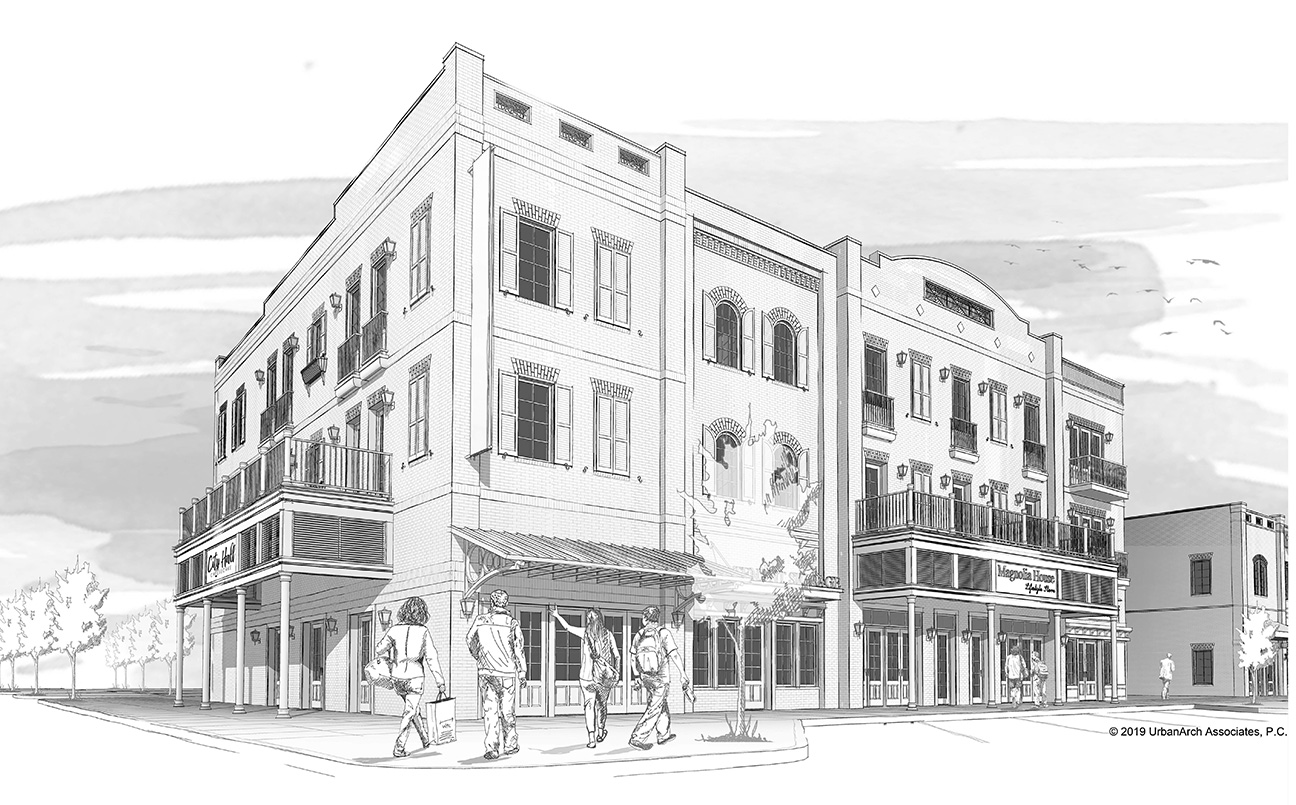 Silo Square’s mixed-used development in Southaven will offer a variety of activities in one convenient place.

“I love the character and charm they have, and I’ve always wanted to [create one,]” says Hill, owner of Lifestyle Communities, a real estate development company in Hernando. “I’ve never had the right piece of property to do it.”

That all changed when the owners of the Silo Square property approached Hill to help create something that would benefit the residents of Southaven.

“I got out four pieces of paper, sat down at my table and started drafting the plan for Silo Square,” he says. “Southaven has never had a central gathering place, and locals have longed for a place like Silo Square.”

Announced in November 2017 and now under construction, Silo Square — named for the silo standing on the corner of the property — is a $200-million mixed-used development on 228 acres between Getwell and Tchulahoma roads across from BankPlus Amphitheatre and next to Snowden Grove Park.

“Silo Square is a walkable community designed so residents can come home, throw their keys on the counter and walk to whatever they need,” Hill says. “They can go to dinner, go to the store, go to the dentist and even go to work.”

At Silo Square, the main focus is 14 two-and three-story buildings around a “town square” with 100,000 square feet of retail and restaurant space across the buildings’ first floors. The upper floors will house approximately 120 lofts. The first two buildings are expected to open in June and will include such businesses as City Hall Cheesecake, Magnolia House Lifestyle Store, Ultimate Gifts and Custom Jewelry.

The exterior of the buildings are architecturally designed to resemble historic downtowns not unlike those found in many other locations. In fact, Hill says he took inspiration from downtown Memphis. He worked with Brian Bullard, Stephen Skinner, and Will Sealock of UrbanArch Associates P.C. in Memphis to create the designs. He also worked with Dalhoff Thomas Design Studio in Memphis on renderings.

Those designs certainly caught the attention of Southaven city officials.

“Silo Square will bring architectural character never seen here before as the buildings will be built with an urban design up near the streets and sidewalks and made to look like old buildings built many decades ago,” Southaven Mayor Darren Musselwhite stated in an April 24, 2018, post on his blog. “The general design will have the look of what you will see on Main Street in Memphis, the Square in Oxford, or in old ski-resort towns in Colorado.”

Four designated office lots will house a variety of businesses, including a dentist office, on a 4-acre site. Planters Bank also is building its North Mississippi headquarters at Silo Square. At the back of the development, approximately 305 single-family residential homes will occupy approximately 120 acres.

Currently, there is one restaurant open for business: Slim Chickens, which sits on an outparcel. Another restaurant, Tekila Mexican Grill & Cantina, will occupy another outparcel. Hill is excited about the plans for this future eatery.

“There’s not a restaurant in Memphis that compares to it architecturally,” he says. “It will feature traditional architecture to match the silo (the development’s namesake) with black accents, but then it has modern flare and a second-floor patio overlooking Snowden Grove Park.”

Silo Square will have approximately 63 acres of common open space that consists of wooded areas, lakes, trail systems, and parks. A focal point will be a 40-foot bell tower complete with a reclaimed church bell.

“We will have pocket parks in the development as well as a dedicated dog park approximately 1 acre in size,” Hill says.

Currently, soccer fields are under construction at Snowden Grove Park, which is expected to bring in more visitors from out of town. To address that need, Silo Square plans to add a hotel into its already eclectic mix of offerings.

Additional plans call for a farmers market building that will be a replica of an old barn. Hill says he hopes it will host a winter ice skating rink as well as other seasonal events such as an antique car show and a sunflower festival, which would pay homage to the sunflower field that used to bloom along Getwell Road.

Hill also envisions Silo Square as the site of charity fundraising events held in the town square, happenings which will be similar to a block party.

For Musselwhite, Silo Square fulfills a years-long request. In his blog post, the mayor stated that, for five years, he asked developers to bring something to Southaven the city hasn’t had before. He also believes Silo Square will “tie-in nicely with Snowden Grove Park and help make our city more pedestrian-friendly and improve our entertainment value.

“Southaven is an ‘auto-era’ city that has never had a traditional town square that is commonly found with older, ‘rail-era’ cities that were naturally designed to be more walkable,” Musselwhite wrote in his blog. “The town square design with this development will add this amenity.”

The mayor is not alone in his praise of Silo Square. In 2019, the Memphis Business Journal named Silo Square one of its “Best Real Estate Deals,” holding court with such notables as the Overton Square hotel and One Beale mixed-used development, both in Memphis.

Due to the amount of rain Southaven has experienced over the last several months, the completion of Silo Square is behind schedule. Right now, Hill hopes to have six of the 14 town square buildings completed, with another two under construction, by the end of 2020. Residential construction also is underway, both with the lofts and the single-family homes. He estimates the commercial area is eight months behind schedule, and the residential area is a year behind.

Regardless, Hill hopes Southaven residents will agree Silo Square is worth the wait.