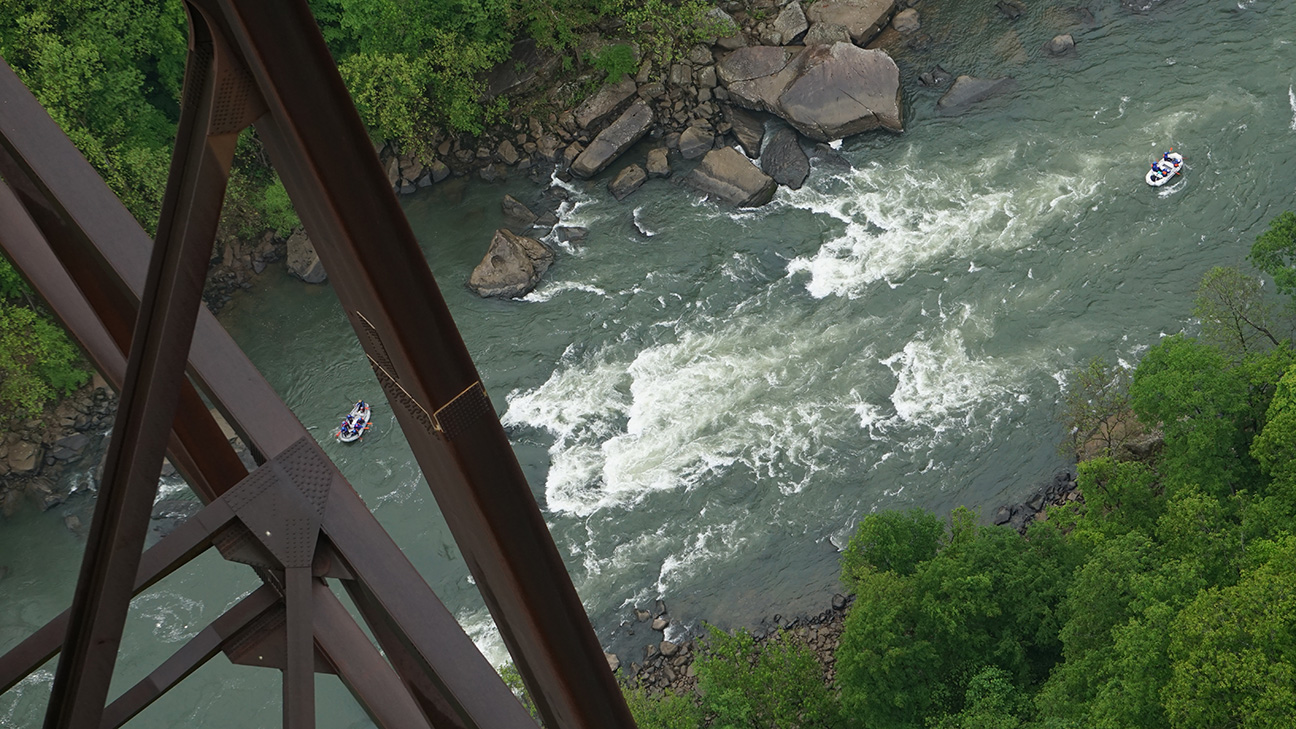 The nation’s latest national park offers a new hybrid model with more recreational opportunities in the heart of West Virginia.

At dawn, clouds laced the sky. The New River Gorge Bridge’s skeletal silhouette seemed to span a river of fog as wild and churning as the river secreted below. By breakfast time, the rain had begun. Drops peppered tender young leaves with a rhythmic irregularity and the fog had risen to flood levels, wispy tendrils that once sweept the feet of the bridge now scraped the bottom of the arch. The clouds and fog seemed intent on merging as if they wanted to keep New River Gorge National Park and Preserve — the country’s 63rd and newest national park — a secret from visitors a little while longer.

The New River was no secret to me. I grew up a couple of hours away in Logan and between school field trips, business calls to coal mines with my father, and trips whitewater rafting with my Boy Scout troop, church youth group, and college friends, I’d been here 50 times, maybe more. I’d rafted the New — Upper and Lower — and the nearby Gauley River dozens of times. I’d been to Bridge Day, a celebration of New River Gorge Bridge — the highest single-span bridge in the Western Hemisphere — held each October and felt a kinship with the bridge even as a kid. After all, we shared a birth month of October, making it the finest month in West Virginia’s history.

​ In December 2020, after nearly four decades of work that started with Congressman Nick Jo Rayhall and ended with Senators Joe Manchin and Shelley Moore Capito, New River Gorge National Park and Preserve was made official, and the world was about to know one of the best-kept secrets of the southeast: West Virginia lives up to its slogan and is indeed both wild and wonderful. And now, there was a reason to rediscover the Mountain State, or to head there for the first time.

​ New River Gorge National Park and Preserve (NRGNP) covers more than 70,000 rugged, coal-rich acres adjacent to Fayetteville, near the confluence of Interstates 77 and 64 and the town of Beckley. The first park-preserve hybrid outside of Alaska, it’s already drawing droves of national parks fans, outdoors enthusiasts hyped up by the newness of the place, and West Virginians curious to see what has changed.

​ Comprised of 7,021 acres of riverfront and ridgetop national park and 53 miles of free-flowing whitewater river surrounded by a 65,156-acre national preserve, NRGNP’s hybrid model allows for more recreational opportunities than a pure national park. Within the preserve, ATVs are welcome, as are mountain bikes (both in designated areas), and hunters can return to generations-long stalking grounds, activities that are prohibited or severely limited within national parks.

​ Senator Manchin, who called his and West Virginia’s “love and appreciation of the outdoors” a key reason to push for the establishment of this park, said, “Some of my best memories are hunting, fishing, and exploring our wild and wonderful state. And it’s been a privilege to share my love of the outdoors with my children and grandchildren.”

​ That love is about to be shared far and wide, and it stands to boost West Virginia’s already-booming outdoor recreation industry, which brings in around $9 billion annually, outstripping coal — the industry that most think of when they consider West Virginia — and opening a new chapter of growth for the state.

Exploring the Park
Within NRGNP, there’s plenty to do. Nearly 100 miles of hiking trails crisscross New River Gorge, and mountain bikers have some 60 miles of trail and singletrack to ride. Rangers, park staff, and locals who championed the efforts to establish the park all agree: as soon as budgets allow, they want more trails, including a rim-to-rim hike a la Grand Canyon National Park, and a trail encircling the whole park, an ambitious loop of more than 100 miles that would draw those long-trail hikers who frequent the Appalachian Trail or Pacific Crest Trail, and introduce thousands of the challenge and reward of long-distance hiking.

New River Gorge is the deepest in the Appalachians, and hidden behind a scrim of trees on the steep slopes leading to the river are sandstone cliffs 30 to 120 feet high. More than 1,600 named and established routes in the park call to intermediate and advanced climbers, and innumerable bouldering problems (bouldering is the sport of low-altitude climbing that’s rope-free and often not more than a few feet off the ground) provide a challenge to those new to the sport, as well as experienced climbers who arrive ready to chalk up and hit the rock.

​ But as much as the 1.6-mile Grandview Rim Trail (which, as the name implies, pays off with a truly grand view of the gorge and New River), the absolutely stunning views of New River Gorge Bridge found on Long Point Trail. The cliff faces, climbing opportunities, and scenery found on the easy 2.4-mile Endless Wall hike are highlights for every visitor who decides to dirty their boots, the real draw here is the New River.

Getting on the Water
The New River, ironically one of the oldest rivers in the world, flows north from its source in North Carolina’s Blue Ridge Mountains, growing from a wide, wadable, tubing-friendly river into a roaring, whitewater-filled beast by the time it reaches the National Park. Here, 53 miles of river has cut deep into the landscape, and it has the rapids to prove it.

On the Upper New, long, gentle pools are punctuated by Class I-III rapids, an ideal setup for those new to and nervous about whitewater rafting. The Lower New is a different story. Here you get into truly epic whitewater, the kind West Virginia likes to show off on billboards, magazine ads, and Instagram posts. Here, you experience the true power of the river and there’s not a Class I or II rapid to be found. Instead, it’s big water ranging from Class III to Class V, and paddling is not for the faint of heart. Fortunately, a number of outfitters run these rapids thousands of times a year, and their guides — and safety records — are impeccable.

Among the best of them is Adventures on the Gorge, which has more than just whitewater guides. On their 250-acre ridgetop campus, you’ll find cabins and tent and RV campsites, a collection of restaurants and cafes, and porches and decks overlooking the New River and granting postcard-worthy views of the bridge.

Back to the Bridge
On that morning when dawn broke through a sky laced with rainclouds and the fog rose from the gorge like a river about to breech its banks, I left Adventures on the Gorge for a Bridge Walk, a walking tour of New River Gorge Bridge that leads you across a 3,030-foot catwalk under the bridge, through the very heart of the steel arch. By the time we reached the bridge, the rain was coming down in earnest and the fog shrouded all but a few hundred yards of the roadway, the curve of the arch barely visible. Under the bridge, we clipped into a safety line and started our way across a 2-foot-wide catwalk, the fog hiding our destination and the river far below. Soon, we heard the rain stop and a breeze stirred the fog. More of the bridge was revealed and we looked down 200 feet onto the tops of trees. A few hundred yards on, the fog dissipated and, 876 feet below us, the New River revealed itself. My group stopped and listened. Traffic rumbled overhead, then silence, birdcalls, the whisper of the rapids below. And we saw it: a quartet of boats navigating the final rapids of the Upper New, about to get into the wild waters of the Lower.