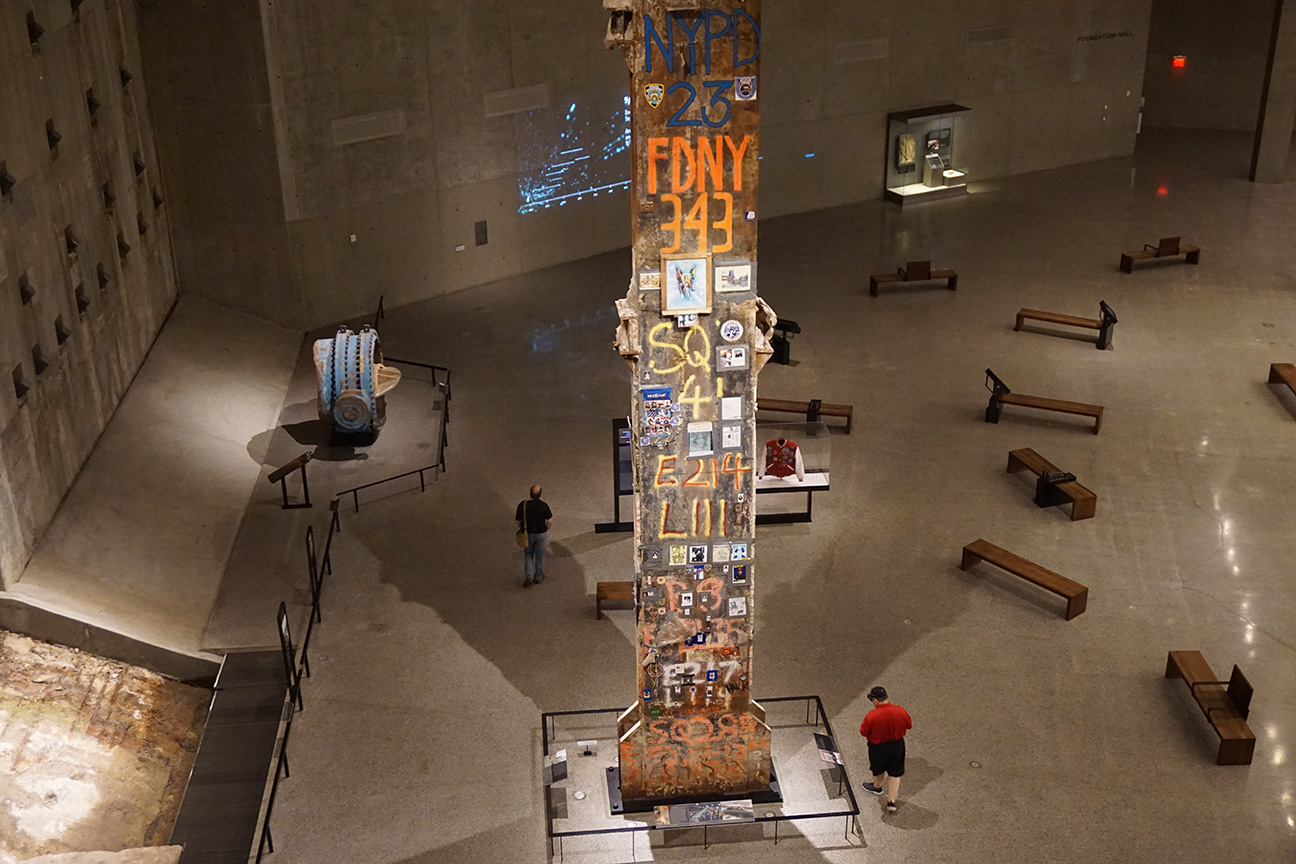 Like many other infamous dates, September 11 is still etched in our collective memories as the 20th anniversary of the nation’s most horrible terrorist act approaches.

The sky was a vivid blue canvas as I sat on a bench outside the National September 11 Memorial & Museum at the World Trade Center (WTC) in New York City. Behind me, water was softly cascading in the black granite reflecting pool where the north tower once stood. I could not have found a more peaceful setting to wait for the museum to open, but my mind would not let me have solace. All I could envision were planes flying in low against the clear blue sky and crashing into two of the most iconic towers gracing the New York skyline.

Visiting the museum and memorial is an emotional experience, but the message that our nation is irrepressible and can rise from ashes is felt everywhere on the complex. Outside, near the south reflecting pool, the Survivor Tree stands tall again after being pulled from the rubble. After the NYC Department of Parks and Recreation nursed the Callery pear tree back to health, it was replanted in 2010 at the memorial as a living reminder of resilience, survival, and hope.

This month marks the 20th anniversary of that infamous day, and special programs will reinforce the messages of hope and strength. Most notably, the Sixth Annual Anniversary in the Schools webinar on Sept. 11, 2021, will feature Carlton Shelley II and five others who will share their stories. Shelley was a student at Emma E. Booker Elementary School in Sarasota, Fla., where President George W. Bush was visiting when he was informed of the attacks.

“I’ll never forget how I felt that day,” says Shelley, a West Point graduate. “Though at that age, I could not conceive the gravity of those events. The transition from excitement to confusion to fear is still palpable to this day.”

Located on eight of the 16 acres at the World Trade Center site, the memorial plaza and museum honor the 2,983 people who were killed in the terrorist attacks of not only Sept. 11, 2001, but also victims of the Feb. 26, 1993, WTC bombing. The memorial plaza consists of two reflecting pools formed in the footprints of the original twin towers. Named “Reflecting Absence,” the pools contain the names of everyone killed in the 9/11 attacks. White roses are placed next to names of the victims on their birthdays.

The museum opened in May 2014 after delays and controversies, but has since become one of New York City’s most-visited attractions. Before the pandemic, the museum received about 9,000 visitors per day from all 50 states and around the world.

The 110,000-square-foot exhibition portion of the museum is mostly located beneath the memorial plaza and contains more than 67,500 items, including 17,200 artifacts, and more than 44,000 print and digital images. Physical remnants — including a New York Fire Department Ladder 3 firetruck missing its cab, personal items like watches and shoes, photos that once sat on desks, battered fire helmets — are numerous.

The survivors’ stairs and “The Last Column” are unforgettable to visitors because of their poignancy. The Vesey Street stairs served as an escape route for hundreds of people. The column, a beam used by rescuers as a landmark to find missing people and which became covered with memorial tributes, was the last item removed during the recovery and cleanup effort. The messages written on it came to symbolize the determination and dedication of those who participated in those efforts.

Many visitors pause for more than a few moments at the blue-tiled wall where the Roman poet Virgil is quoted, “No day shall erase you from the memory of time,” in a powerful 60-foot eulogy across Memorial Hall. Blacksmith Tom Joyce made each of the 15-inch-high letters from steel appropriated from the wreckage of the towers. Behind the quote, the site-specific art installation titled “Trying to Remember the Color of the Sky on That September Morning” by artist Spencer Finch was particularly haunting. The piece contains 2,983 watercolor squares representing the victims.

Memorial Hall, where each and every victim is remembered with photos, biographies, and voice recordings from family members, has a powerful impact on visitors. And it’s where the quiet sobs are most often heard, especially as voicemail recordings are played. Many victims inside the World Trade Center and on Flight 93, which crashed in Pennsylvania that morning after being hijacked, had time to call loved ones to say a final goodbye.

Despite the solemnity of the events detailed at the National September 11 Memorial & Museum, there is solace in knowing those faces and voices will never be forgotten. They forever will be a part of the memorial and museum that triumphantly stand for human dignity over human depravity.

Former museum CEO Joseph C. Daniels best summed up the site’s historic relevance when the museum opened in 2014: “We built this museum…to make sure that our children’s children’s children know what this country went through on 9/11 and, equally as important, know how we came together to help one another with absolutely limitless compassion.”

If You Go
Reserve your timed tickets online; otherwise, you could be standing in line a long time and tickets do sell out. Also, you will want to visit as early in the day as possible.

The museum is open daily beginning at 9 a.m. Closing hours vary depending on the day. General admission is $17 adults, $12 students and seniors 65-plus, and $7 children. The exterior memorials are free, including the one honoring those whose deaths have been attributed to 9/11-related illnesses.

Download the free audio app for iPhone or Android devices. Produced by Acoustiguide for the 9/11 Museum, the audio tour is narrated by actor Robert De Niro. Be sure to bring a headset or earphones to listen quietly.

And if you can’t visit in person, the museum’s website also offers an excellent virtual tour that shows the sheer magnitude of the space inside the museum and many of the exhibits.