Window
to the Waters 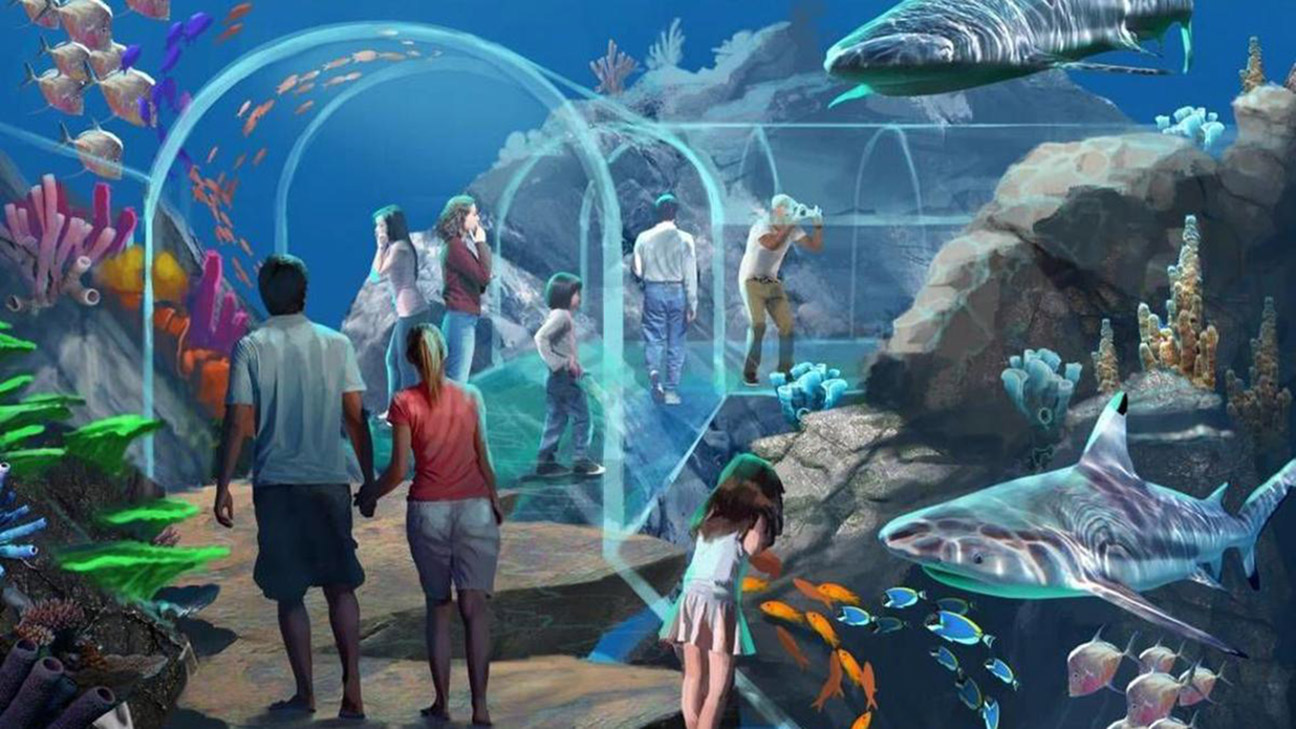 After much anticipation, the Mississippi Aquarium opens in Gulfport on a very significant date.

Building an aquarium containing 80,000 square feet of indoor and outdoor exhibits on almost six acres can be quite an undertaking. Add a June tropical storm and an ongoing pandemic to the mix and delays are bound to happen.

The Mississippi Aquarium in Gulfport, after a few setbacks, finally opened on Aug. 29. And it wasn’t a date taken lightly.

“We picked that date because it’s meant to be a symbol of rebirth,” says Collin Caranna, advertising and digital media manager, adding that Aug. 29 is the 15th anniversary of Hurricane Katrina hitting the Mississippi Coast.

What to expect
Visitors enter the property through a plaza which fronts East Beach Boulevard and are immediately greeted by a water feature that will light up each night. Also gracing the plaza are the iconic three sails, a 65-foot sculpture mirroring the sails on a boat.

Once inside, visitors will follow an outside covered pathway that replicates bayous, rivers, and other aquatic habitats. First up is the alligator and American crocodile exhibit, where visitors can view these massive reptiles up close and personal — but not that close.

“There’s going to be shade across the whole boardwalk because it is southern Mississippi heat,” Caranna says. “And lots of signage everywhere. It’s a very interactive campus, meant to represent the waterways of the region.”

From the “Crocodilian Habitat,” visitors pass an upper river stream that contains gar, catfish, and other fish, and then view an otter habitat where four otters named Sugar, Magnolia “Maggie,” Fin, and Jackson — all named by the public — swim. Because of a kid’s crawl space, children can watch otters swim underwater.

An enormous dolphin arena concludes the outside exhibits, with visitors now reaching the Gulf of Mexico exhibit. Bottlenose dolphins swim in the expansive space and the public can watch trainers feed them. The dolphins will not be required to do tricks.

“Our naturalists and trainers were heavily involved in the design,” Caranna says of the exhibit.

Also at river’s end is the aviary, featuring a wide variety of birds.

“They (contractors) put those on one by one,” Caranna says. “There’s a lot of artistry going into these buildings.”

The “Changing Tides” building exists for special events, such as weddings, receptions, reunions, and more. The round space — no hard lines anywhere — will host revolving exhibits as well.

The main building, labeled “Aquatic Wonders,” is the showpiece of the Mississippi Aquarium. A massive aquarium fills the building, with underwater views on the ground floor and interactive exhibits at the top.

Best way to enjoy this exhibit is to take the escalator to the top where stingrays and sea urchins are available to touch and visitors can look down into the waters. Soft music plays when visitors head down a circular walkway, with deeper tones emanating the lower visitors walk. In the middle of the walkway is what Caranna calls the “Swirl,” a round aquarium filled with fish that swim at different levels, just like in a real ocean.

“Brown to blue and beyond is the theme,” explains Caranna. “As you descend you start on the shores of the Mississippi River and head to the Coast and to the deeper part of the ocean.”

In the center of “Aquatic Wonders” lies the 360-degree acrylic tunnel where visitors literally walk on water.

“You’ll be able to see the fish seven feet below you,” Caranna says. “It’s the only suspended tunnel in the United States.”

On the ground floor, with its dreamy floors painted with waves of blues and browns, visitors may peep through windows to spotlight different types of fish, such as eels and sharks. Habitats were built to attract specific species, so that visitors may view them in their designated grottos.

“There are so many great recovery stories, and now Mississippi Aquarium will be another great story,” says Kurt Allen, president and CEO of Mississippi Aquarium in a press release announcing the new opening date. “Our leaders and communities put the hard work into rebuilding the Coast following Hurricane Katrina and it has paid off.”

The City of Gulfport acquired the land opposite Jones Park and the Gulfport Marina and the Gulfport Redevelopment Commission began the process. Construction started in May 2018, building the base elevation 25 feet higher to allow the campus to be above Katrina’s storm surge and therefore safer from future storms.

The finished aquatic campus hosts 200-plus species in 12 habitats, 50 species of native plants, and a 30-foot-long tunnel through water where visitors can view fish and other aquatic species at 360 degrees. In addition, the Mississippi Aquarium will offer marine education in interactive classrooms, field trip programs, university partnerships, educator support programs, and a Mobile Marine Unit aimed at bringing coastal Mississippi throughout the region.

Many of the aquatic species were acquired from other aquariums, Caranna says, including some with unique stories. A green turtle, for instance, was rescued by the Florida Aquarium after being struck by a boat and deemed unable to be released into the wild. Banner, named after the main character of “The Incredible Hulk,” is now a permanent member of the Mississippi Aquarium.

Most of the animals brought to the facility over the past year had to be quarantined, then slowly introduced to other species, which took weeks, sometimes months.

The aquarium isn’t the only redo on the Gulfport beach. The former 20th-century Harrison County Library next door, deemed a historical building, has been carefully restored for use as the Mississippi Aquarium office. The building has been vacant since Katrina and will now offer aquatic classes for school field trips and summer camps.

Visitors are encouraged to buy tickets online, to enable the aquarium to regulate the number of people entering the facility; reservations are made in 30-minute time slots. The length of a visitor’s stay, however, will not be limited.

If visitors choose to buy tickets onsite, they must provide for social distancing at the plaza ticket areas.

Educational programs and presentations may be offered in public areas, but times and locations are still to be determined.

For more information on the Mississippi Aquarium and to purchase tickets, visit www.msaquarium.org.