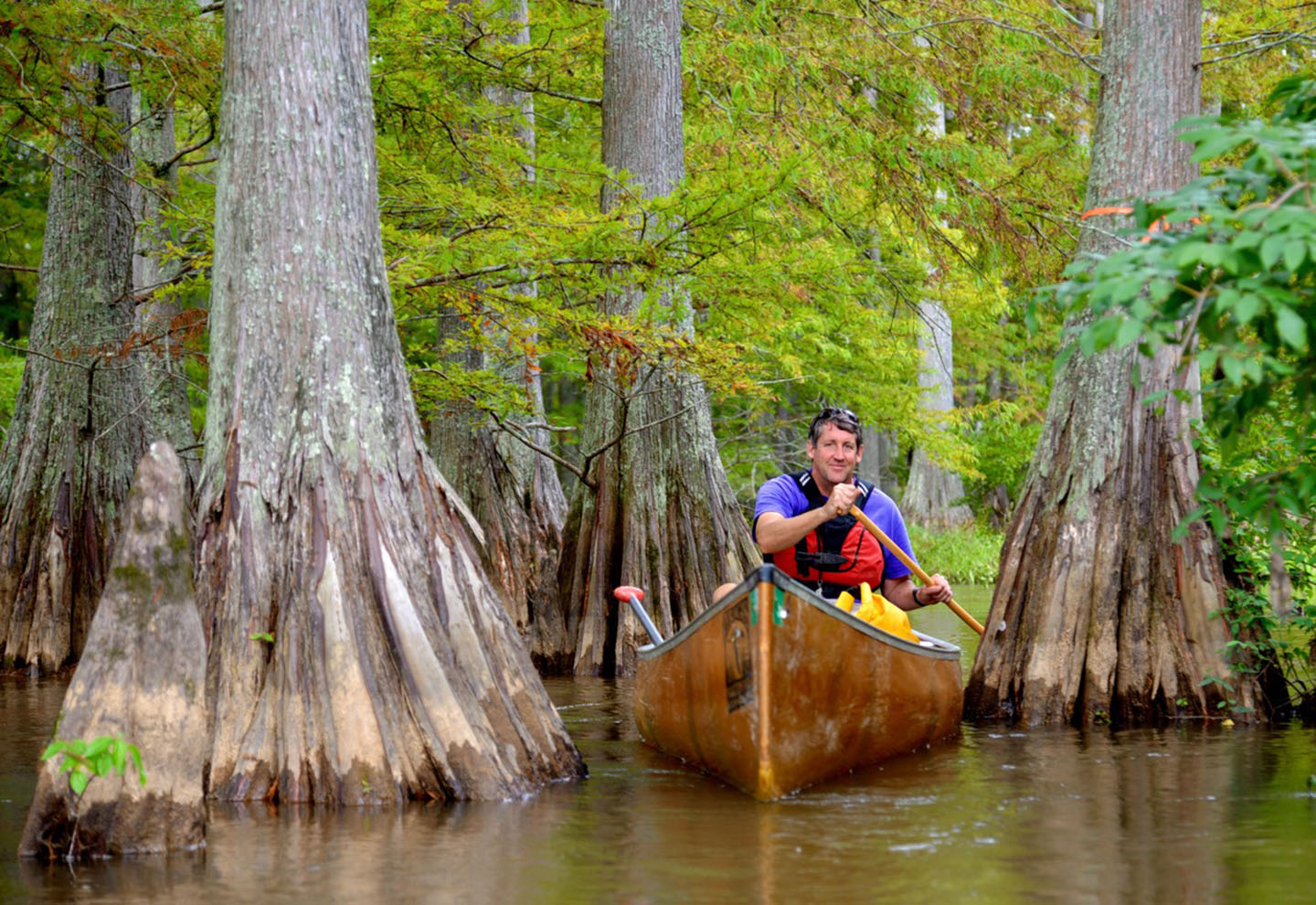 Activities abound around Memphis to cure coronavirus claustrophobia with a dose of autumn sunshine.

For months now, due to the COVID-19 pandemic, a sense of being cooped up has likely been growing inside many Southerners. It’s understandable to feel inhibited about getting out and venturing into crowded places. Staying indoors through summer’s heat has only added to the bad vibes. However, autumn is here, and it is time to release the pressure valve.

“I don’t believe that all that many people realize how many places there are in the immediate Memphis area to get outdoors and to explore, experience and enjoy nature,” says Larry Rea, for decades the outdoor editor of The Commercial Appeal and now host of the “Outdoors with Larry Rea” radio show on ESPN 790-AM in Memphis and other West Tennessee stations.

Two state parks, one of the largest municipal parks in America, two state-owned family fishing lakes, and a popular stretch of the Wolf River account for more than 20,000 acres where you can hike, bike, fish, paddle, hunt for wildflowers, or scout for birds ranging from American bald eagles to black-bellied whistling ducks.

These and other activities are possible while staying appropriately socially distanced. (A social distance hint: The recommended six-foot separation is the wingspan of a bald eagle, such as the ones you might see at Meeman-Shelby Forest State Park or T.O. Fuller State Park, or the length of a large rat snake, which you probably hope not to see anywhere, although they are quite harmless unless you are a small rodent.)

Meeman-Shelby Forest State Park is an accessible dive-into-nature destination less than 15 miles from the Peabody Hotel. It is a 12,539-acre expanse of hardwood bottomland bordering the Mississippi River that contains multiple state and national champion trees (meaning they are exceptional examples of their species due to great size, age, or rarity). It has 20 miles of hiking trails, including the 8-mile Chickasaw Bluff Trail that overlooks Poplar Tree Lake.

Birdwatching, an activity that doesn’t require a crowd, is big at Meeman-Shelby because birders have tallied 200 species of songbirds, waterfowl, shorebirds, and raptors there. T.O. Fuller State Park, built in the Depression by the Civilian Conservation Corps as the first state park east of the Mississippi River for African-Americans, is another place birders flock. Its wetlands attract migrating shorebirds, and its Discovery Trail (one of three) leads to the archaeological education you can get at the pre-Columbian C.H. Nash Museum of the Prehistoric Chucalissa.

Paddlers and anglers like Meeman-Shelby for its kayak, jon boat, and paddleboat rentals, and among its naturalist-led activities are deep swamp canoe floats into the cypress wetlands that look eerie and beautiful at the same time. Disc golf is another major draw because of a wooded 36-hole course that is among the largest in the Southeast.

Interest in fishing has blossomed since the pandemic arrived, and opportunities to cast a line abound in and around Memphis. Tennessee has more than 325 species of fish, and some of the more popular ones make it to the dinner table.

“As soon as lockdowns began, (fishing) license sales really took off. Other places may be closed, but the water is open, and the outdoors are open,” says Jenifer Wisniewski, the Tennessee Wildlife Resources Agency’s chief of outreach and communication, reporting that by late July, sales were 16 percent more than 2019.

TWRA makes it easy to put a fishing license to use at two specially maintained lakes in the Memphis area, part of a statewide network for family fishing lakes. One is 177-acre Herb Parsons Lake near Collierville, and the other is 310-acre Glenn Springs Lake 12 miles northeast of Millington.

Both are open all year for fishing off the bank or from your own watercraft (canoe, kayak, or other boat with no more than a trolling motor), and both have seasonal stores for rental boats, bait, snacks, and beverages. Herb Parsons Lake has the bonus of multiple hiking and biking trails, including a 9.7-mile bike trail. Anglers depart from both lakes with bass, bluegill, crappie, catfish, and good memories.

Opportunities for fishing and boating are plentiful at Shelby Farms Park, but its 20 lakes and ponds are only the start of a long, long list of activities. The first is passive — observing the park’s approximately 20 free-roaming buffalo and understanding quickly why singer Roger Miller was right that “you can’t roller skate in a buffalo herd.”

“Shelby Farms Park is a real community asset,” says Rebecca Dailey, communications specialist for the 4,500-acre park, which long ago was a county prison farm and in 2007 became a park run by the nonprofit Shelby Farms Park Conservancy. Dailey is quick to tell you that Shelby Farms Park is one of the largest urban parks in America and is five times larger than the admittedly more famous Central Park in New York City. You can visit sunrise to sunset every day of the year.

The 10.65-mile Shelby Farms Greenline is perhaps the best-known park asset for some socially distanced activities. This rails-to-trails project is a paved route for walking or bicycling that stretches from the heart of Memphis to Cordova. If you want more distance, the park has 40 miles of trails altogether.

You can get a different perspective on horseback (there’s a rental stable in the park) or high in the trees for the ropes courses, canopy tours, and ziplines of a concessionaire called Go Ape. More perspectives are available in the Outback (100 acres set aside for off-leash dog activity and horseback riding if you bring your own horse) and on an 18-hole disc golf course.

Throughout the Memphis area, kayaks and canoes are the ultimate conveyances for socially distanced activity, and their popularity has mushroomed this year.

“It’s insane how many kayaks we’ve sold this year,” says David Best, operations manager at S.Y. Wilson and Co. in Arlington. Best says most are rigged for anglers because so much water is accessible and because Memphis has assets such as the two TWRA lakes and the lakes in Shelby Farms Park and Meeman-Shelby Forest State Park.

For downriver floats, Best says many paddlers venture two hours east to the Buffalo River or they become fans of the hometown Wolf River, particularly a stretch called the Ghost River, so named because the current can almost disappear into the wooded bottomland, creating a mysterious and perhaps ghostly atmosphere.

The Ghost River float covers 8.5 river miles from LaGrange to the Bateman Bridge in Moscow and takes three-to-five hours for an experienced paddler, says Mark Babb of Ghost River Rentals. The next stretch is called the Lost Swamp and is about seven miles, and the river flows another 50 miles through Shelby County before reaching the Mississippi River.

“October is a beautiful time to float on the Wolf River. The autumn color in the trees can be spectacular,” Babb says.

Even if paddling a kayak, casting a lure, hiking a trail, or running around a disc golf course are beyond your energy level, Memphis still holds invigorating outdoor options for you.

Most accessible of all are a riverside walk in Tom Lee Park or the jaunt over the Mississippi to Arkansas on Big River Crossing. It’s fun to brag that you took a two-state hike, even if it was just a stroll across a railroad bridge that now has a dedicated path for walkers.