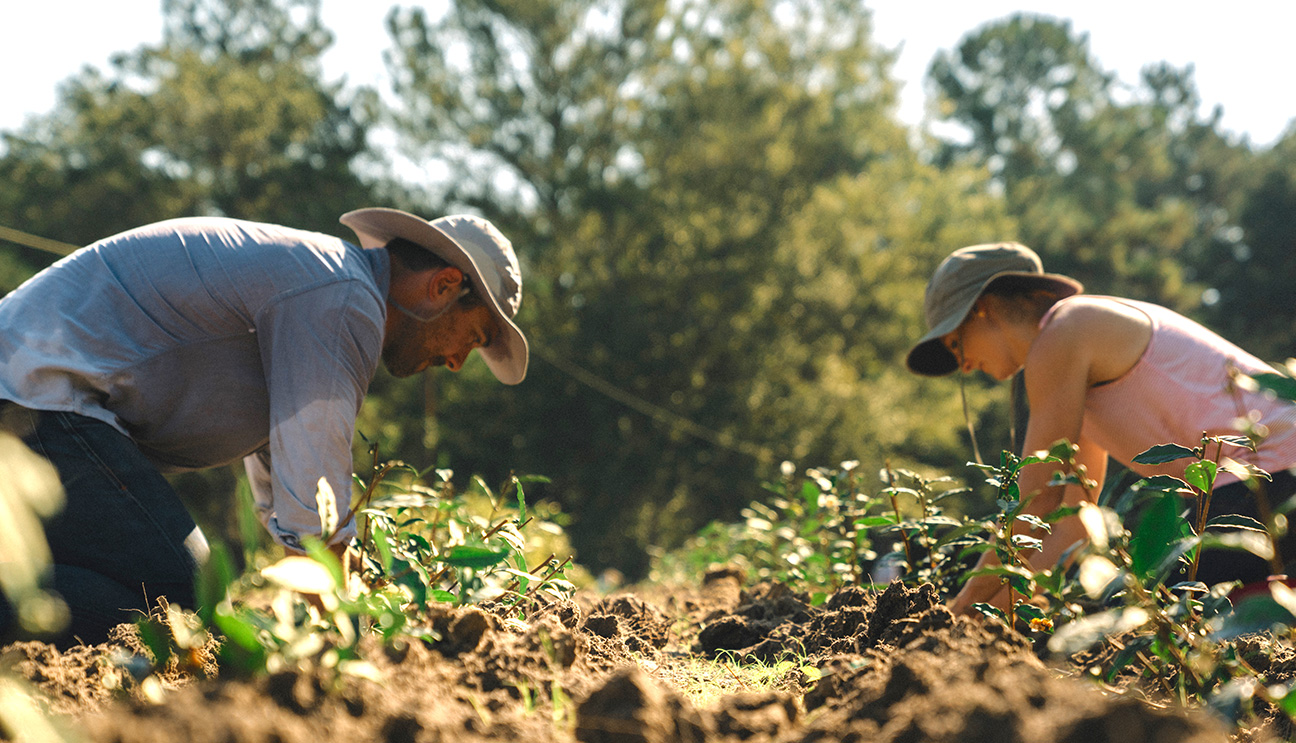 Thomas and Hillary Steinwinder stir up something nice with their Laurel-based Longleaf Tea Company.

Working in Shanghai on an engineering project, Thomas Steinwinder would often visit a tea shop near his office to practice his Mandarin Chinese language skills and enjoy some delicious tea. One day the shop owner asked the American where tea is grown in his homeland.

“When I told her that tea is not widely grown in the United States, she asked why,” Steinwinder says. “That’s what got me thinking. That’s what started it all.”

A naturally curious fella, Steinwinder spent the next seven years researching tea farming and if it could be successfully done in Mississippi.

“I also tried to grow tea plants on my back patio,” he says. “There’s not a lot of inherent knowledge on how to do it in our country so I had a lot to learn.”

In 2018, Steinwinder and his wife, Hillary, decided it was time. Working “two days straight,” the couple planted 1,200 tea plants at the family’s historic farm in Laurel, Miss.

“My wife and I are both from South Mississippi and the farm has been in her family for five generations,” Steinwinder says.

The historic farm is also where the new tea business got its name — Longleaf Tea Company.

“The farm originally was a longleaf pine timber farm so the name is a nod to the heritage of the farm, as well as to the high-quality tea made from the full, unbroken leaf,” he says.

With no employees, the Steinwinders rely on family help for the massive planting and cultivation process. “The hardest part is the weeds. We go to battle with the weeds every single week,” he says. “We are often out there hand pulling and mowing.”

Although deer and rabbits don’t like to munch on bitter tea plants, little pests called armyworms can be quite destructive.

“We haven’t seen them yet, but armyworms can wipe out entire fields in a matter of hours,” Steinwinder says. “They grow underground — thousands of them — and move in a line like marching soldiers, eating everything in their path.”

After three years of growing, the Longleaf tea shrubs are ready for their first harvest this year.

“We have to hand pick them,” Steinwinder says, noting that the best time to pick the leaves is in the morning after the dew has dried off. “You only take the top two leaves and it can take hours to do it. You don’t want the leaves to be wet.”

Large baskets made by local Choctaw Indians are good for gathering the leaves. Each harvest is a big family event complete with a picnic.

“It is hard work, but it is fun,” Steinwinder says. “We sold out our first harvested tea within hours.”

In Southern Mississippi, the tea harvest season runs from late March through October when tea leaves can be harvested every two weeks. Black, green, and white tea come from the same plant. The different tastes and colors show up in the processing after the tea leaves are picked.

So far, Longleaf Tea Company is producing Meadow Green Tea and Revival Black Tea in packages that proudly proclaim that it is “Mississippi Tea.” Longleaf Tea Company’s future plans include adding a tea tasting room and shop on the Laurel property, as well as putting more tea plants in the ground.

“We currently have an acre under production and have cleared another 10 acres for production,” Steinwinder says. “If anything, this venture has taught us patience.”

The company’s goal, Steinwinder says, is to produce top-quality tea and reduce the need for tea imports from other countries.

“Since we drink so much tea here, we really need to be producing our own,” he says.

According to the U.S. League of Tea Growers, there are only about 60 tea farms across a few American states, including three in Mississippi. Americans drink close to 4 billion gallons of tea a year, 99 percent of which is grown in other countries.

“With our warm humid climate, rainfall, and acidic soil, Mississippi could one day be a major tea producer,” Steinwinder says. “We’re exploring that possibility.”

In fact, when Steinwinder was a child, his ambition was to grow up to become an explorer. Although an engineer by trade, perhaps Steinwinder is fulfilling that childhood dream of venturing into new territory.

“Growing tea has been an adventure, a big learning experience,” he says “I feel like we are producing something special, something that maybe will become such high-quality tea that China will start importing it from us. That would be great.”