Disney World at 50: A Magical Celebration 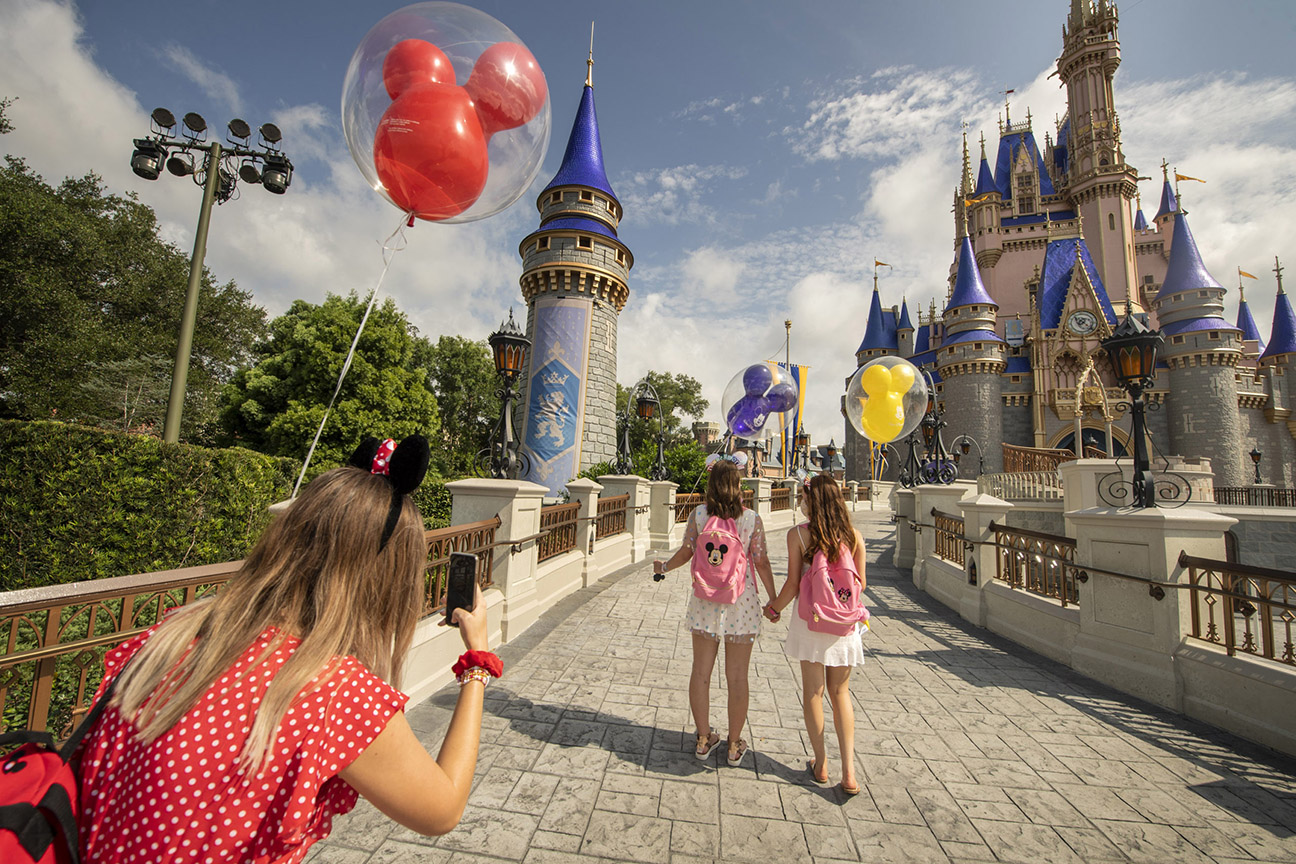 Walt Disney World has grown immensely in the five decades since it opened but the magic is still there, especially as its golden anniversary celebration begins.

The most magical place on earth is celebrating its 50th anniversary, and those “kids” who were among the first to visit Disney World’s Magic Kingdom in the early 1970s are now returning with grandchildren in tow. The family experience is what Walt Disney always wanted for his theme parks — a place where the young at heart of all ages could laugh and play and learn together, as his brother Roy remarked at the opening day dedication.

“The World’s Most Magical Celebration” — as Disney has named its 18-month anniversary observance — will mark the major milestone with new experiences at all four theme parks that now comprise Walt Disney World Resort in Orlando, Fla.

​“Back in ’71, there was one park, the Magic Kingdom, which was a smaller scaled-down experience,” says Disney historian Aaron Goldberg, who remembers his own first visit to Disney World in the early ’80s as a 6- or 7-year-old. “In some ways, it’s vastly different with more options now, but the core Disney magic is still there. The customer service and smiling faces are still there.”

​ One of those original smiling faces on opening day, Oct. 1, 1971, was DeSoto writer Pamela A. Keene, who was a sophomore at Stetson University in DeLand, Fla., at the time. She and some classmates were recruited to dance in the opening parade after several weeks of rehearsals.

​“We danced all the way down Main Street to Cinderella Castle,” remembers Keene, who later worked on weekends at Disney’s Fantasyland while she was a student. “I thought it was the most wonderful thing that happened to me to get to work there.”

​ At the time, Keene found it hard to believe that a second Disney venture — the first being Disneyland in California — was opening almost in her backyard. “It is amazing to think how it has since become an international destination,” she says of the Orlando park. “It was a magical place to work, and I think the heart of Disney is still there.”

While the magical experience still exists, some things have changed. Visiting Disney World, or any of the theme parks, requires a lot more planning than it did 50 years ago when families could just show up at the gates. Today, reservations must be made in advance and park hopping (visiting more than one park in a day without paying an extra fee) is currently not allowed.

​ “One of the major changes from 1971 to today is you really have to plan the trip now. Fifteen or 20 years ago you could wing it, but you can’t do that anymore,” advises Goldberg, author of the books, “The Wonders of Walt Disney’s World” and “Buying Disney’s World.”

​ Florida lifestyle blogger Melody Pittman took her daughters to Disney World in the late ’90s and recently returned with her two-year-old granddaughter who was visiting from Pearl, Miss.

​ “I miss the spontaneity at Disney,” she says. “It’s much more structured now. You have to have reservations for everything. I had friends drive from West Virginia and couldn’t get in because the park was at capacity.”

​ Even with the reservation system, tighter attendance caps, and high admission prices, crowds keep coming. In its 2021 Summer Travel Index, the website TripAdvisor named Orlando the highest ranked U.S. destination for Americans traveling this summer based on its traffic and booking data. Most of them will visit a theme park while in town.

​ Goldberg says Disney World relies heavily on the nostalgia factor to attract repeat guests. “I feel they can almost do whatever they want and people will still come,” he says. “They really market to bring people back every year.”

​ After the Magic Kingdom opened in 1971, other theme parks — EPCOT (1982), Disney’s Hollywood Studios (1989), and Disney’s Animal Kingdom (1998) — became part of the Walt Disney World Resort. Plans are underway to mark this milestone anniversary with special events, entertainment, and new attractions at all four parks. The parks will transform into “Beacons of Magic” at night with an “EARidescent” glow, paying homage to Disney’s most famous ambassador, Mickey Mouse and his distinctive ears. The mouse and his spouse, Minnie, will be sporting sparkling new attire, custom-made for the occasion.

​ Shimmering EARidescent décor will appear — as if by magical pixie dust — beginning with Cinderella Castle, the iconic centerpiece in Magic Kingdom Park. The castle received a royal makeover in 2020 with new gold bunting, golden embellishments, and a 50th anniversary crest.

Magical fireflies will gather around the Tree of Life at Animal Kingdom, emanating a warm light and reminding visitors of the magic of nature. Disney’s Hollywood Studios will evoke the golden age with reimagined exhibits and rides. New lights will shine across the reflective panels of Spaceship Earth at EPCOT, resembling stars in the nighttime sky and symbolizing optimism.

​ EPCOT will unveil another new attraction in October with Remy’s Ratatouille Adventure. Guests will dive into the flavorful world of Disney and Pixar’s Academy Award-winning film, “Ratatouille,” where they will seemingly shrink to the size of Chef Remy and scurry through Gusteau’s famous restaurant.

​ Open since 2019, Star Wars: Galaxy Edge at Disney’s Hollywood Studios draws the most crowds, and reservations are definitely needed for the two major rides, Millennium Falcon: Smugglers Run and Star Wars: Rise of the Resistance. Guests can also build their own custom lightsabers in Savi’s Workshop. In 2022, a new out-of-this-world experience will be offered when the Star Wars: Galactic Starcruiser opens for a two-night immersive adventure.

​ “Without a doubt, Galaxy Edge is the most popular attraction,” says Goldberg. “You can see on social media how people line up for hours. I have done it, and it was pretty remarkable even for those who aren’t ‘Star Wars’ fans.”

A 21st CENTURY PARK WITH A NOD TO THE PAST
The Star Wars: Galaxy Edge may be the most visible example of how technology has updated the Disney World attractions over the last five decades. Technology has also made day-to-day operations more convenient, especially for guests.

​ Mira Tempkin of Deerfield, Ill., noticed the technology was the biggest change from when she took her three children in the 1990s to a recent visit to the Magic Kingdom last year with her granddaughters.

​“Before we arrived in the park, we could plan our Disney Experience on an app, which let us sign up for three specific ride times. My granddaughter and I decided together which rides we wanted to go on first,” she explains. “We had a 9 a.m. time for It’s a Small World and we walked right on. Once inside the park, we could grab a fast pass with an exact time to board a ride. Both cut down our wait times substantially and made for a better in-park experience.”

​ Although some of the rides she remembered from previous visits had been replaced, she agrees the magic was still there.

​“I loved watching my children’s faces as they embraced the Disney magic that you could feel throughout the park,” she says. “It was again magical watching the experience through the eyes of my grandchildren.”

​ That same magic fascinated a young Goldberg, who eventually made a career writing about Walt Disney World. When he visited in his 20s, he became even more fascinated. “It blew me away that all this could come from one man’s mind,” he says.

​ He recommends looking beyond the glitz to see things others overlook, like the red sidewalks and the symbolic numbers.

“Disney is in the details,” he explains. “Everything you see there is deliberate. Everywhere you look, there is a purpose. There is so much thought and effort put into the details.”

​ A barrel near Peter Pan’s attraction hides a fire hydrant, the Emporium’s 1901 signage signifies Walt Disney’s birthyear, and sidewalks are painted red to make surrounding colors more vibrant. And if you forget when Disney’s Magic Kingdom first began, just look up at the recently renovated Fire Engine Company No. 71, a numerical nod to the opening date.

​ “Walt’s attention to detail has been cultivated and honed by the storytellers — the Imagineers — who help carry on his legacy,” adds Goldberg.