Travel on a Plate 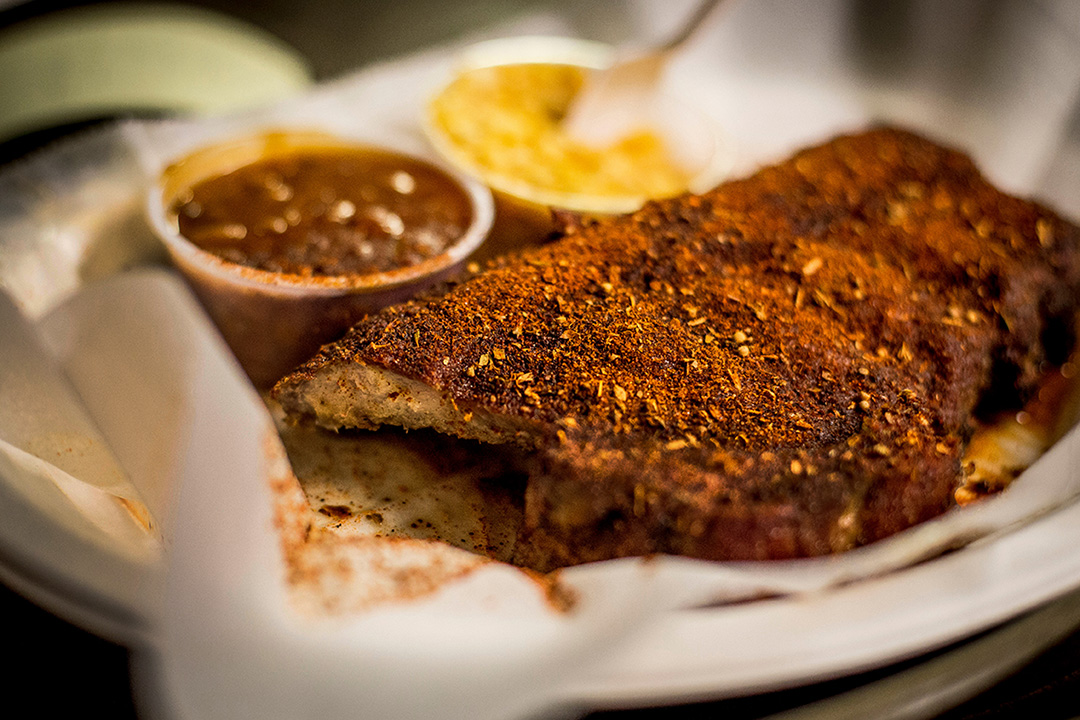 Southern food is enjoying a renaissance, and for good reason. Our region has delicious dishes that shine a light on our identity. And people are paying attention. I looked across the South for iconic plates and found five that blend our collective history with big flavor.

I have no doubt you’ve tried some of these while others may surprise you, and I believe you’ll finish this story hungry and ready for a road trip. After all, the joy of travel often includes sampling the cuisine of the places we visit.

Beignets, New Orleans
A lot of things are synonymous with New Orleans — jazz, gumbo, étouffée, voodoo — but one of the best is the beignet, that oh-so-good bit of fried pastry served hot and covered with a powdered sugar avalanche.

Beignets weren’t born in New Orleans; they hail from the French motherland. When the Acadians made their way to New Orleans, they brought their food influence with them, including the beignet. Traditionally made of a choux pastry (that’s the pastry used in eclairs and other treats), but occasionally made from a yeasted dough (like a donut), they’re just about bite-sized and make for a breakfast item or a dessert. Or pre-dinner snack. Or hangover preventative. Or just walking around food.

You’ll find the beignet on menus across the South regardless of whether a restaurant serves Cajun cuisine or not, but when you’re in New Orleans there’s one place to get them: Café Du Monde. Café Du Monde is open 24/7 and beignets have been on the menu there since the 1860s. Get your order with a cup of coffee and chicory, a bitter blend that offers a nice balance to the sweet, pillowy beignet.

Tamales, Mississippi Delta
When most people think tamales, their minds head south and west to Texas, New Mexico, and Mexico. If they’ve tried one from Mississippi, from then on, a tamale is a Southern dish.

Matthew Register, owner of Southern Smoke Barbecue in Garland, N.C., has a real affinity for Delta Tamales, so much so he included them in his cookbook “Southern Smoke: Barbecue, Traditions, and Treasured Recipes Reimagined for Today.” Why this deep love for Delta Tamales? “They’re delicious, my spirit food,” Register says.

How’d they get here? Accounts vary, but the prevailing story insists that during Reconstruction, Hispanic workers arrived, bringing their foodways to Mississippi. Masa, the type of cornmeal used to make tamales, wasn’t available, so they used the heartier, grainier cornmeal in the area to make the tamale, then used other local ingredients — pork barbecue, for instance — to flavor the dish.

In his cookbook, Register makes a braised pork filling for his tamales, but Scott’s Hot Tamales (a must-eat) in Greenville, Miss., uses beef brisket. Though the tamale filling varies from place to place, the heat does not: Delta Tamales are spicy. And that’s the way we like them.

Memphis Barbecue, Memphis
We’re serious about barbecue in the South and Memphis is no exception. With their signature style — dry-rubbed pork ribs — and monster Memphis in May barbecue festival and competition, Memphis folks walk-the-walk when it comes to ’cue. But what makes it so special?

Taylor Goode, owner of Tastin’ ’Round Town Memphis Food Tours, says it’s “all about the low and slow, that rub and the fact that you don’t even need sauce.” Tastin’ ’Round Town would know: their Memphis BBQ Tasting Tour hits up some of the best barbecue joints in town.

But that’s not the whole story.

“Barbecue is a poor person’s food,” says Lance Silkes, barbecue judge and former owner of Tastin’ ’Round Town. “Barbecue was made from unwanted cuts of pork or from meat that was on the verge of going bad. By adding a spicy, salty rub and by cooking the meat over a low fire for a long time, the meat cures and is good to eat. The rub and cooking style also serve to tenderize tough cuts.”

Memphis, a trading town on the Mississippi River, had plenty of spices come through, so the rub — a blend of brown sugar, cumin, dried garlic and onion, salt, pepper, and paprika — used spices on hand to develop a signature flavor.

“You can tell Memphis barbecue by what’s called the ‘Memphis Squeeze,’” Silkes says. “That’s when you squeeze the meat. If it falls apart or flakes into fibers almost like pulled pork, then it is Memphis barbecue cooked with a rub and no sauce. If it’s spongy, it was cooked with sauce, which sort of traps moisture in there and lets the meat steam, and that’s more of a Kansas City-style.”

For your taste of Memphis barbecue, visit Memphis in May World Championship BBQ Cooking Contest, or try swinging by The Rendezvous, Pig on Beale, or Arnold’s.

Shrimp and Grits, Charleston
I’ve heard Shrimp and Grits called the King of Southern Cuisine by chefs and food personalities and I disagree. Shrimp and Grits, the Low Country staple, is an ambassador introducing Southern flavors and ingredients to the world. You can find it on menus in New York, Los Angeles, Cleveland (Ohio, not Mississippi) — even Chile and Budapest. It’s a dish that’s representative of how Southern food can transcend the simple and become divine.

At its core, Shrimp and Grits is perfection in a handful of ingredients. The first recipes that appear —one of the most notable is the 1930 “Two-Hundred Years of Charleston Cooking” cookbook — are simplicity personified: prepare grits, cook fresh shrimp in bacon grease until pink, season with salt and pepper, serve. Tender grits, the corn’s natural sugars accentuated by a dash of salt, and shrimp, also sweet, rich and filling after cooking in the grease, need no further accompaniment.

Where should you go for Shrimp and Grits? When you’re in Charleston, S.C., look no further than 82 Queen. Their Shrimp and Grits is simple: shrimp, grits, a touch of bourbon barbecue sauce, some cheddar, bacon, and a sprinkle of scallions. The dish is so good you’ll swear your grandmama made it.

Hot Brown, Louisville
Back in the 1920s, dance parties at The Brown Hotel in Louisville, Ky., drew more than a thousand guests for dinner and dancing every evening. At the end of the night, or rather early in the morning, after the last dance was called, people were hungry, so the kitchen accommodated them. What did they want? Ham and eggs? Some hash browns? Maybe a pancake?

Enter the Hot Brown, an open-faced turkey sandwich topped with bacon and Mornay sauce. The dish has been a staple since its introduction in 1926, and every chef at The Brown Hotel since has been told the same thing when it comes to this sandwich: “Hands off.”

“That’s what they told me when I started here,” says Executive Chef James Adams. “Hands off. Don’t mess with perfection.”

The only variations they see are by diner request. “We get some folks who want three eggs or they want their eggs sunny side up, but that’s about it,” Adams says.

A couple of folks are in charge of making the sandwich in The Brown Hotel Kitchen, but only Adams handles the Mornay. “We serve between 100 and 140 Hot Browns on a regular day and more than 1,000 a day around the Kentucky Derby,” he says. And that adds up to a lot of sauce. “I make at least one 30-gallon batch of Mornay every day, but around Derby time we need 10 times that much.”

Where should you try a Hot Brown? You’ll find Hot Brown competitions all over and you’ll even spy a Hot Brown on the occasional menu but you must sample the original in Louisville.

Key Lime Pie, Key West
Let’s finish with dessert way down at the tip of Florida, where Key Lime Pie is an iconic item in Key West.

The tiny, tart, and flavor-packed Key limes that every Key Lime Pie must have were introduced to the masses in 1905 when a writer for The Country Gentleman magazine described them as “the finest on the market.” We couldn’t agree more. The concentrated lime flavor, bold aroma, and delicate zest play perfectly against the short crust and the eggy, condensed milk filling.

The recipe for Key Lime Pie dates to the late 1940s when they were used to add an acid punch to a condensed milk custard pie. But a nearly identical recipe appears in the early 1930s in New York where the Borden company likely produced a lemon and custard pie to help condensed milk sales.

Coincidence or a good recipe that moved South? It doesn’t matter because Key Lime Pie is now and will forever be tied to the Florida Keys.

Ready for a taste off? Try slices from Kermit’s Key Lime Pie Shop, Blue Heaven, and Old Town Bakery, all in Key West, of course.

Makes about 30 tamales
For the Pork Filling

For the Tamale Dough

To make the pork filling: In a 16-quart (15 l) stockpot, heat the oil over medium-high heat. Once the oil begins to shimmer, add the onion and pork. Cook for 3 to 4 minutes, or until the pork browns, then add the salt. Stir and add enough water to the pot to cover the pork and onion. Reduce the heat to medium-low and simmer, covered, until the meat is tender, about 2 to 2½ hours.

Take the pot off the heat and remove the pork from the cooking liquid and set aside. Once the pork is cool enough to handle, remove and discard any skin and big chunks of fat. Shred or dice the meat and return it to the pot. Turn the burner back on to medium. Add the chili powder, paprika, black pepper, cayenne, red pepper flakes, and garlic powder. Cook, stirring occasionally, for 10 minutes. Set aside.

To prepare the corn husks: While the meat mixture is cooking, soak the husks in a large bowl or a small sink filled with hot water. They can soak until you’re ready to use them, but make sure to soak for at least 45 minutes so that they are soft and pliable. When you are ready to use them, remove them from the water and gently dry them off with a paper towel.

To make the dough: In a large mixing bowl, combine all of the dough ingredients. Mix the dough by hand until it is well combined. The dough should be moist but not wet; it should look like soft cake batter. Cover the mixture with a warm, moist towel until you are ready to use it, no more than 3 hours.

Note: A trick to making sure you have fluffy dough is to drop a small piece of dough into a cup of cold water. If it floats, it’s ready. If it doesn’t float, mix the dough a little more and add some additional lard.

One at a time, lay each corn husk flat with the pointy end facing you. Spread about ¼ cup of the dough out on the corn husk until it makes a 4-inch (10 cm) circle. Spoon about 1½ teaspoons of the meat mixture down the middle of the tamale.

Take both long sides of the tamale and bring them together. You’ll know you did this right if the batter completely surrounds the filling. Tuck one side under the other and roll. Take the bottom part of the husk and fold it under. Tie the flap with corn husk strips or string; do not tie them too tight, though, as the tamales need room to expand.

Place the tamales in a steamer basket with the folded bottoms pointing down. Place the leftover corn husks over the top of the tamales. Steam the tamales over medium heat, making sure that the water does not touch them and that it doesn’t boil away. When the tamales are finished, the corn husks should easily peel away from the masa.

To serve, open up the wrappers and pour the reheated cooking liquid over the top. 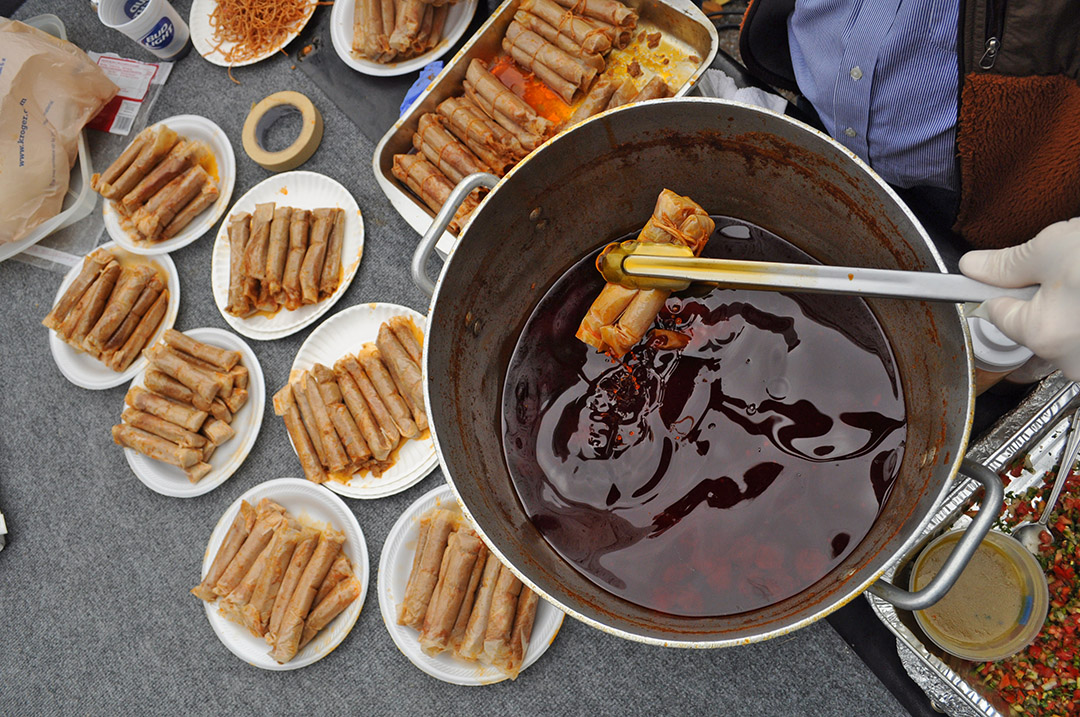