One Man’s
Vision
& His
Gospel
of Beauty 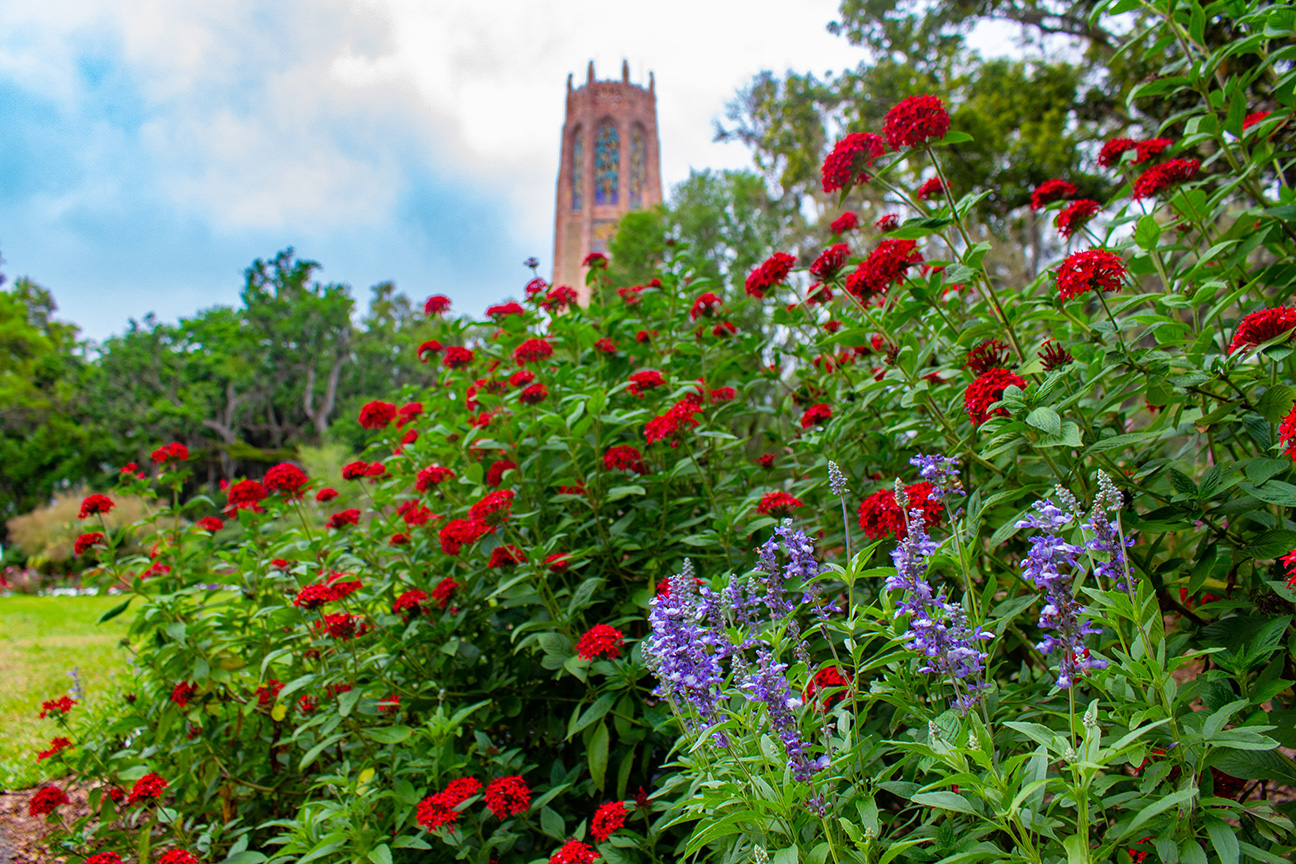 One of Florida’s most iconic landmarks, the Bok Tower, is surrounded by spectacular gardens always in bloom and filled with inspiration.

The hills around the Lake Wales Ridge in Central Florida are alive with music. Yes, there are a few hills in peninsular Florida and one of the highest is Iron Mountain, rising 295 feet above sea level. It’s there that Edward W. Bok built his famous Singing Tower, which houses a 60-bell carillon and is the pinnacle of Bok Tower Gardens.

Born in Den Helder, Netherlands, in 1863, Bok came to the United States with his parents at age six but he never forgot the beauty of his native country, the glorious music from European bell towers, or the lessons he learned from his grandparents about creating a better world. After a successful career in publishing in New York, he retired in 1919 and spent more time at his winter home on one of Florida’s highest hills. In 1921, Bok commissioned landscape architect Frederick L. Olmsted Jr. to change his arid sand hill into a “spot of beauty second to none in the country.”

Even with all its beauty, Bok still felt something was missing in the gardens. In 1927, he commissioned Philadelphia architect Milton B. Medary, to create the majestic Singing Tower. The bell towers of Europe inspired both Medary and Bok to create the pink marble and coquina tower in a neo-Gothic style with Art Deco flourishes. The symbolism reflects a unique Florida flavor with sculptures conveying a decidedly spiritual and natural theme. Eagles and herons, as opposed to the traditional Gothic gargoyles, are prevalent throughout the designs and the hammered brass repoussé doors represent the biblical story of the creation from the Book of Genesis.

When the Singing Tower was completed in 1929, President Calvin Coolidge was on hand to dedicate it, emphasizing Bok’s own words “to make the world a bit better and more beautiful.” Bok said Bok Tower Gardens was a gift to the American people in gratitude for the opportunities that America had given him.

It’s quite possible to hear the music from the carillon bells before you see the 205-foot tower rising in the distance, making the experience of walking through the gardens even more magical. The gardens are as close to a vision of Eden as I can imagine. Peaceful, serene, tranquil are the words that came to mind as I meandered along the paths in the 50-acre plot filled with azaleas, camellias, and magnolias encompassed by a native oak hammock. Olmsted and his team planted a mix of native and exotic plants that could thrive in a humid climate. He also carefully selected plants that would provide a hearty supply of food and shelter for migrating birds and other wildlife in the gardens.

“Edward W. Bok was a man of vision and brought to life one of Florida’s earliest attractions. His beautiful “Singing Tower” carillon has drawn visitors to Central Florida for more than 90 years,” says Kelly Rote, communications specialist for Visit Central Florida. “He went on to become a very successful businessman and eventually built Bok Tower Gardens as his ‘thank you’ to the American people for the prosperous life he was able to build here.”

Bok’s Legacies
If you love magazines, you may know that Edward W. Bok was editor of The Ladies Home Journal for 30 years from 1889 to 1919.

Under his management, the magazine became one of the most successful and influential publications in America, and it was the first magazine in the world to have one million subscribers. Bok used his position as a champion of social causes; he was a pioneer in in the field of public sex education, prenatal education and childcare, and was an environmental activist. He never forgot his grandparents’ influence to create a better world.

“His beloved grandmother always worked to instill in him a sense of gratitude and told him ‘Make the world a bit better or more beautiful because you have lived in it’,” says Rote.

A prolific writer, even after his retirement, Bok’s most poignant quotes are found throughout his gardens. Those inspirational messages, such as “Give to the world the best you have and the best will come back to you,” transcend time in the place Bok envisioned as a sanctuary for both wildlife and people.

Today, the Bok Tower Gardens includes several preserves and wetlands as well as an endangered plant garden that displays rare plants from around Florida with information about how to protect them. One of my favorite locations is the well-hidden ‘Window by the Pond,” a small observatory overlooking a pond ecosystem. Visitors can quietly watch as birds, reptiles, butterflies and other creatures coexist in their natural habitat.

Describing Bok Tower Gardens to those who have never visited is difficult; it’s certainly not a theme-park attraction. It’s more than a National Historic Landmark and more than a peaceful oasis of beauty in an ever-growing region of Central Florida. Perhaps Bok himself described it best:

“Neither the Sanctuary nor the Tower was conceived as a memorial or as a monument… Both were erected and laid out solely and singly to express the gospel of beauty to open our eyes and awaken our senses to the beautiful. What more can the heart ask for than to be here. Beauty, beauty, beauty – everywhere and on all sides.”

Music for All Ears
The Singing Tower carillon concerts are at 1 and 3 p.m. daily with short selections also played on the hour and half-hour. The carillon schedule features live concerts by resident carillonneur Geert D’hollander from mid-October through mid-May, Thursday to Sunday. Recordings from the Anton Brees Carillon Library collection can be heard the remainder of the week, as well as during the summer months from mid-May to mid-October.

The music selections run the gamut from classical pieces and hymns to modern-day songs inspired by Frank Sinatra, Elvis Presley, Metallica, Air Supply, and more. A recent Bok After Dark concert featured music selected by Facebook fans of Bok Tower Gardens! Although the Bok Gardens are open 365 days a year, the interior of the Singing Tower is open only on select occasions.

If You Go
With Central Florida’s temperate climate, any time of year is a great time to visit Bok Tower Gardens. Plan to spend an entire day because there is so much to see. Begin at the Visitors Center, where you’ll find out what’s in bloom that day and learn about Edward Bok’s life. You’ll also see how the intricate carillons were installed in the Singing Tower. The on-site Blue Palmetto Café is a budget-friendly place for salads, sandwiches, and snacks or you can bring your own picnic to eat in the designated outdoor areas. Be sure to check the online calendar for special events, like ‘Bok at Night’ or seminars and classes about gardening.

Make time to visit the adjoining Pinewood Estates, a 1930s-era home constructed for Bethlehem Steel’s vice president, Charles Buck – no relation to Edward Bok. The fully decorated home and its elaborate gardens were acquired by Bok Tower Gardens in 1970.