Butter up for Biscuits 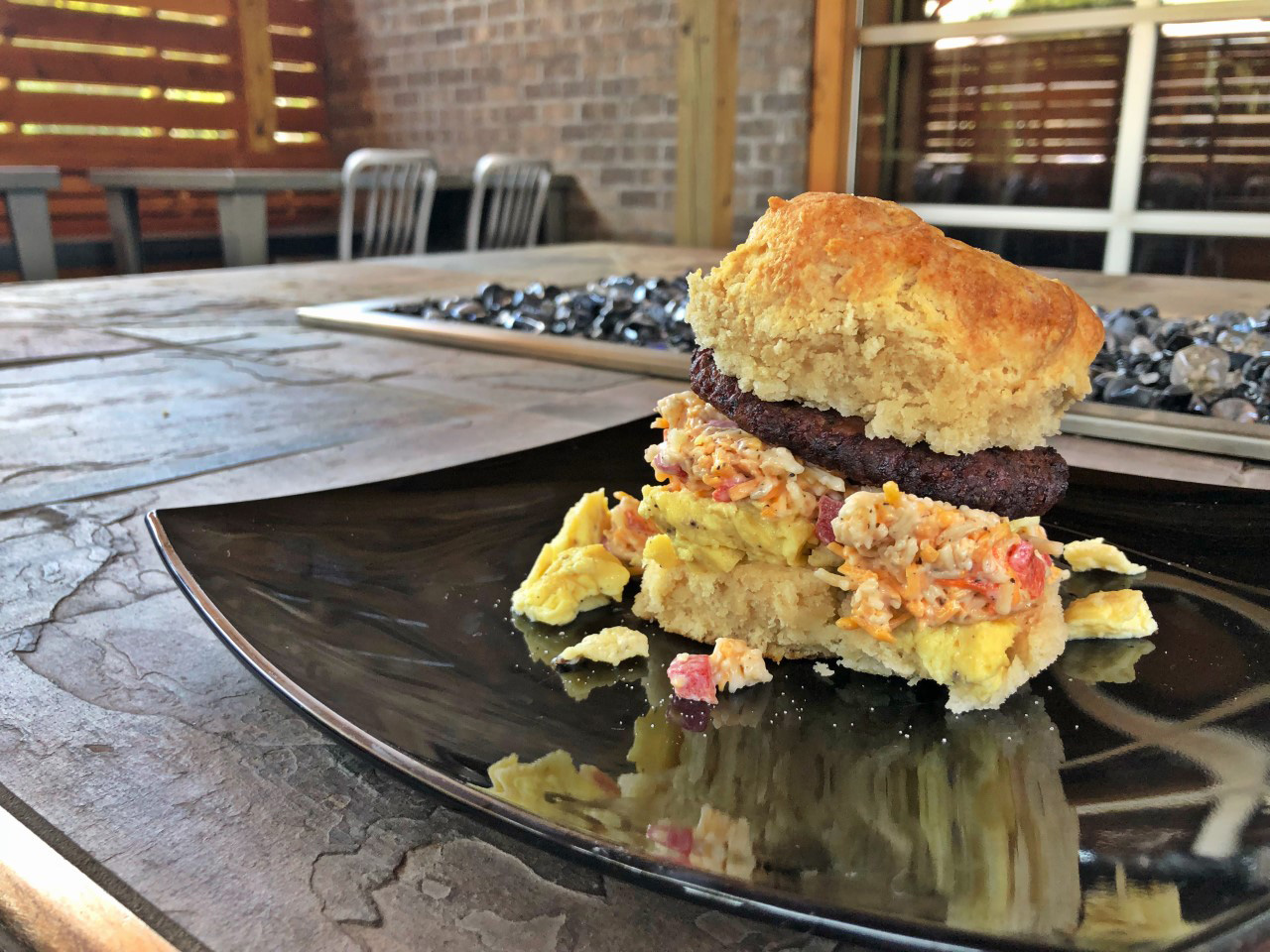 Nothing satisfies appetites like biscuits, but there are secrets to making them light and fluffy.

My grandmother’s biscuits were so light and fluffy, you immediately weighed them down with butter and jam just to keep them from floating away. At every meal, they were ever present, made in the cast iron skillet that still bore scars from her own mother’s wood stove.

Grandma was raised in a mining town north of Birmingham, with seven siblings and a thrifty mother who knew how to stretch food during the many labor strikes. Sausage gravy slathered over a biscuit fed many a family and farmhand throughout the South from early settlement until today.

During the harder, earlier times, mothers turned to hot breads to satisfy hearty appetites. Both cornbread and biscuits are quick breads — breads that do not have to rise. A busy cook could get a pan of biscuits in and out of the oven in 30 minutes, hot and ready for jam or ham. A hearth bread, it could be cooked on the embers of a campfire or on top of a stove. Biscuits do not require an extended, closed heating system, unlike most breads, making it a flexible and filling addition to any meal in any place.

Best of all, there are few ingredients, making biscuits simple, fast and economical, according to Melissa Hall of the Southern Foodways Alliance. Most farms or homes had access to fresh milk and a source of fat, like butter or lard. The poorest could make do with water.

One of the keys as to why the South developed biscuits instead of bread: the wheat. The soft winter red-wheat of the Southern farm is perfect for biscuit making. The gluten protein is weaker, allowing the baking powder to plump up the biscuit in the oven. The low-protein flour absorbs less liquid, leaving the fat to do its fluffing. Hard Northern wheat is better suited to bread making and some say, hockey pucks called biscuits made north of the Mason-Dixon Line.

“Two Southern mills, Martha White in Texas and White Lily in Knoxville, both made flour for biscuits, which was the key,” says Hall. The label to look for is Southern Biscuit Flour.

For the lightest biscuits, serious cooks favor buttermilk. The acids in the tart dairy product reacts with the alkaline baking soda, releasing carbon dioxide to create an airier biscuit.

What is most critical is temperature. The fat – whether it is lard, butter or Crisco – must be the lowest temperature possible. As that fat melts in the oven, separating from the flour, it creates space in the dough. Some cooks chill everything – the flour and even the bowl. You never want to work the dough for long, as your fat will warm up. You cut in the fat with a pastry blender or by hand as fast as possible to keep from melting the butter. Your dough should be lumpy!

Roll your dough out to about an inch thick, then either spoon drop it or cut it into a cast iron skillet. When you cut your dough with a glass or metal mold, press, don’t twist it into the dough. Place the biscuit dough close together and cook for 15-20 minutes.

Cutting the warm biscuit open, a pat of butter melts perfectly, and is most often covered in jelly or jam, or what my grandmother called “preserves.” Fresh fruit is fleeting and canning is a traditional way to keep the Vitamin C coming long after harvest. A dab of preserves creates a sweet and wholesome breakfast.

While I always enjoyed strawberry jam on my biscuits, my grandfather was strictly a gravy man. Food writer Sheri Castle is the definitive expert on sausage gravy, at least according to the Smithsonian. She is best known for her turkey gravy, which she assures us could win a turkey gravy Olympic gold medal. The secret, she says, is in the stock. (See her recipes at the end of this article)

“Gravy has always been the smartest way to eat up every dab of whatever meat or fat that you had,” says Castle. “It is also the most delicious way to eat biscuits. The extended fat makes you feel full and makes things taste good.”

The nickname sawmill gravy comes from the intense logging of the South, shipping heart pine from the longleaf forests to build great homes and cities. Some people thought the sausage that stuck to the bottom of the pan resembled sawdust, according to Castle.

When you have a pound of sausage to feed a big family, a big skillet full of gravy did the trick. The thrifty home cook never wasted the leavings in the bottom of a pan. Instead, flour or corn meal sprinkled in the pan and mixed with water or milk created the tasty gravy to make the biscuit and meat combo come alive with flavor. In some households, finely chopped tomatoes were cooked into tomato gravy, another Southern delicacy.

Redeye gravy originates higher up on the pig. When lean country ham fries, it leaves a sticky goo on the bottom of the pan. Our never-waste-anything Southern cooks used left-over hot coffee to loosen up the sticky stuff. Some say it looked like a red-eye floating in the rusty gravy. The lean meat makes a stingy gravy, with just a spoonful or two to brighten up bland grits or a biscuit, according to Castle.

In Appalachia, chocolate biscuits dominate the morning hour as a special treat. In Huntsville, the Blue Plate Café offers cocoa gravy only on Saturdays. As the Appalachian Ridge ends in Alabama, Huntsville takes the mountain tradition seriously. Castle says the use of store-bought items, like cocoa powder, lands this delicacy solidly in the you-must-have-been-good-this-week category.

This comfort food soothed more than just the appetite. The biscuits and rich gravy bestowed much-needed calories to workers who daily burned thousands of calories in the field. Today, biscuits grace breakfast tables, surround country ham for lunch, and serve as bread for dinner, still using our unique Southern wheat, and the ingenuity of our Southern ancestors.

Where to Find Good Biscuits

Butterbean, Tupelo, Miss. – Build your own biscuit on these big breads. Butterbean went beyond the cathead biscuit to the panther-head biscuit.

The Biscuits Baseball Team, Montgomery, Ala. – The most unique way to serve a biscuit goes to the Montgomery Biscuits minor league baseball team, which shoots game-day biscuits out of cannons into the stands. First home game is April 15 if you want to catch a biscuit.

1-to-2 tablespoons bacon fat or butter, as needed

Warm a large cast-iron skillet over medium-high heat. Break the sausage into lumps and drop them into the skillet, spacing them evenly. Cook until browned all over with no traces of pink, about 5 minutes. Stir gently from time to time to break up the meat a bit more. The ideal texture is a combination of fine, crisp bits dotted with small tender clumps. Transfer with a slotted spoon to a bowl.

Tilt the skillet to pool the fat in the bottom. If there are less than 3 tablespoons of fat, add enough bacon fat or butter to make up the difference.

Sprinkle the flour over the pan drippings, let stand for a few seconds so that the flour can soak up the fat, and then whisk to blend and to loosen the browned bits of goodie off the bottom of the pan. Cook for 2 minutes, whisking continuously. Don’t shortcut this step. It takes at last 2 minutes for the raw flour taste to cook away. It’s okay if the roux browns a little, but don’t let it scorch.

Add 3 cups of the warm milk in a slow, steady stream, whisking continuously.

Switch from a whisk to a heatproof spatula for stirring. Cook until the mixture thickens and bubbles, about 10 minutes, stirring slowly, continuously, and evenly over the bottom of the skillet. Scrape the edges every once in a while.

Return the sausage and any accumulated liquid to the skillet. Stir until warmed through and gently bubbling. If the gravy gets too thick, add a little more warm milk. No two pans of gravy act the same. Use your best judgment.

They aren’t all that pretty, but if you need quick, easy biscuits to crumble up under gravy, these are hard to beat.

6 ounces – by volume)- heavy cream, plus more for brushing, chilled

Position a rack in the upper third of the oven and heat to 450 degrees.

Stir together the flour and cream to form slightly sticky dough that pulls in all of the flour. Add a splash more cream if needed.

Divide into 6 equal biscuit-size blobs on a parchment-lined baking sheet, spacing them about 2 inches apart.

Brush the tops with cream.