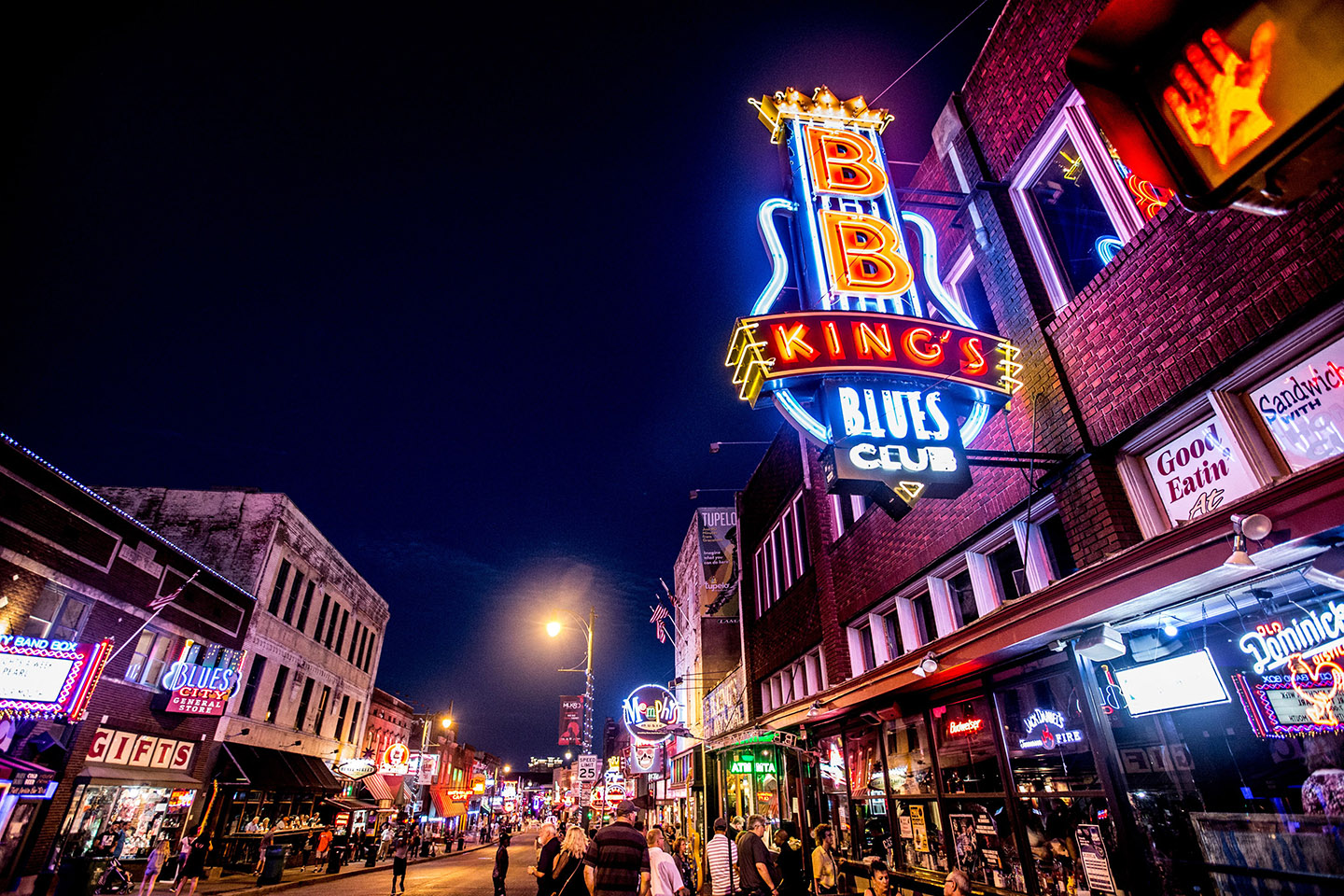 Holiday or any day, the party’s on in Downtown Memphis.

It’s not hard for a music fan to find good times in Memphis, Tennessee. The city is home to places like the legendary Sun Studios and Graceland, both of which offer peeks into the life and career of the late King of Rock ‘n’ Roll, Elvis Presley. But if you really want to let loose and have some fun only one Memphis destination will do: Beale Street.

With the opening of the new Hyatt Centric Beale Street Memphis earlier this year, the first-ever hotel right on Beale Street, revelers now have a classy new headquarters that’s just steps from the fun.

Beale Street, located in Downtown Memphis, has been a hive of Southern music and culture for more than a century. But tourists might not have wanted to hang out there 100 years ago when the area was a hotbed of gamblers, pickpockets, prostitutes, and voodoo practitioners. About the only thing that Beale Street of the 1920s has in common with today’s Beale Street is that the blues players are still recognized as Memphis royalty. Without their continued presence, Beale Street in modern day would likely be just an ordinary stretch or road filled with mundane businesses and not a place where locals and visitors alike can find dozens of unique venues, anchored by the world famous B.B. King’s Blues Club.

Live blues music is the main Beale Street hallmark, and many visitors come to hear it at B.B. King’s Blues Club where they can also chow down on another Memphis specialty: mouthwatering barbecue. King’s is just one of the places to hear live blues music on Beale Street; fans can also boogie down at Jerry Lee Lewis’ Café and Honky Tonk, Club Handy, Blues Hall Juke Joint, Rum Boogie Café, and Silky O’Sullivan’s, which is housed in a building that was around way back in the bad old days of the Memphis strip.

Also on Beale are one-of-a-kind eateries like BBQ joint The Pig on Beale, soul food restaurant Miss Polly’s Soul City Café, Blues City Café where you can “dance your meal off” to live music, and for wrestling fans, Jerry Lawler’s Hall of Fame Bar & Grill.

Perhaps the most unique of venues on Beale Street is Tater Red’s Lucky Mojos and Voodoo Healing where, unlike those untamed days of yore, there will be no hexes or nasty spells cast.

For those who want to learn about where the music they love came from, a visit to the Memphis Rock ‘n’ Soul Museum is a must. Visitors will see a selection of Elvis Presley’s stage outfits and one of B.B. King’s guitars, but the displays go much deeper than that. Self-guided tours of the museum feature in-depth commentary heard on headsets as visitors navigate through “the complete Memphis music story,” including the Smithsonian Institute-created “The Birth of Rock ‘n’ Soul” exhibit. Tours begin with a short film, after which museum-goers can move through the exhibits at their own pace, which likely will be slow enough to marvel at the memorabilia that came directly from the musicians themselves.

“Memphis has historic sites and a lot of tourists come for Graceland and Sun Studio, legendary places where rock and soul exploded,” says John Doyle, the executive director of the Memphis Rock ‘n’ Soul Museum. “But Beale Street is pretty much the backbone of the whole thing.”

Doyle offers a vivid snapshot of the nascent Beale Street music scene. “Beale Street was a social and entertainment district for African Americans in the early 1900s and music was a part of it,” Doyle says. “We always call it ‘the home of the blues’ but actually on Beale Street jazz was performed in clubs and blues was performed on the street. Blues was considered a lower form of music.

“The people who could afford to do so, who were traveling or staying at the hotels on Beale Street would go to those clubs and listen to great jazz by the likes of Count Basie and Duke Ellington,” he continues. “Then the blues performers, in order to pick up tips, would perform outside on the curb. That’s where white teenagers like Jerry Lee Lewis and Elvis Presley, who lived nearby, would walk to Beale Street and listen to those blues performers and be exposed to rhythmic Black music.”

This time of year, all the bluesy Beale Street fun continues with a special emphasis on the season. The 2021 Memphis Holiday Parade will take place Dec. 11 on Beale Street.

“We’ll have elementary and high school bands, cheerleaders, dance groups, car clubs, community organizations, and even Santa Claus with all of his reindeer,” says Jon Shivers, the director of Beale Street at Beale Street Management.

While that’s a family event, the Beale Street New Year’s Eve Party is for ages 21 and older.

“We used to drop a guitar at midnight on New Year’s Eve but now we just use a ball,” says Shivers. “Our Memphis-inspired party begins at 10 p.m. and will feature live music, dancing, food and drink, and more. At midnight the ball drops and then there’s a beautiful fireworks display.”

Entrance to the street party is free.

So now if you’re in Memphis and you think you see Elvis walking down the street singing his hit “Let’s Have a Party” you know exactly where he’s going: to Beale Street.

The lobby features decorations made of iron, a nod to the William C. Ellis and Sons Ironworks and Machine Shop building, a space attached to the hotel that has been refitted to serve as meeting spaces (Beale Street wedding, anyone?).

The lobby is a warm and welcoming place where cocktails can be had at the CIMAS lobby lounge, as a stand-alone treat or before dinner at CIMAS where the menu is inspired by Latin American cuisine but prepared with Southern cooking techniques.

With floor-to-ceiling windows, the dinner tables at CIMAS offer a spectacular view of the Hernando de Soto Bridge (commonly referred to as the M-Bridge) that spans the Mississippi River connecting Memphis with Arkansas. That view is even more precious at the hotel’s rooftop bar, Beck & Call, which offers an unprecedented display of the bridge as it puts on its nightly light show.

Offering both rooms and suites, the Hyatt Centric Beale Street Memphis also has a resort-style pool; the perfect place to rest up for another evening on Beale Street.