A Fairy Tale in Miniature 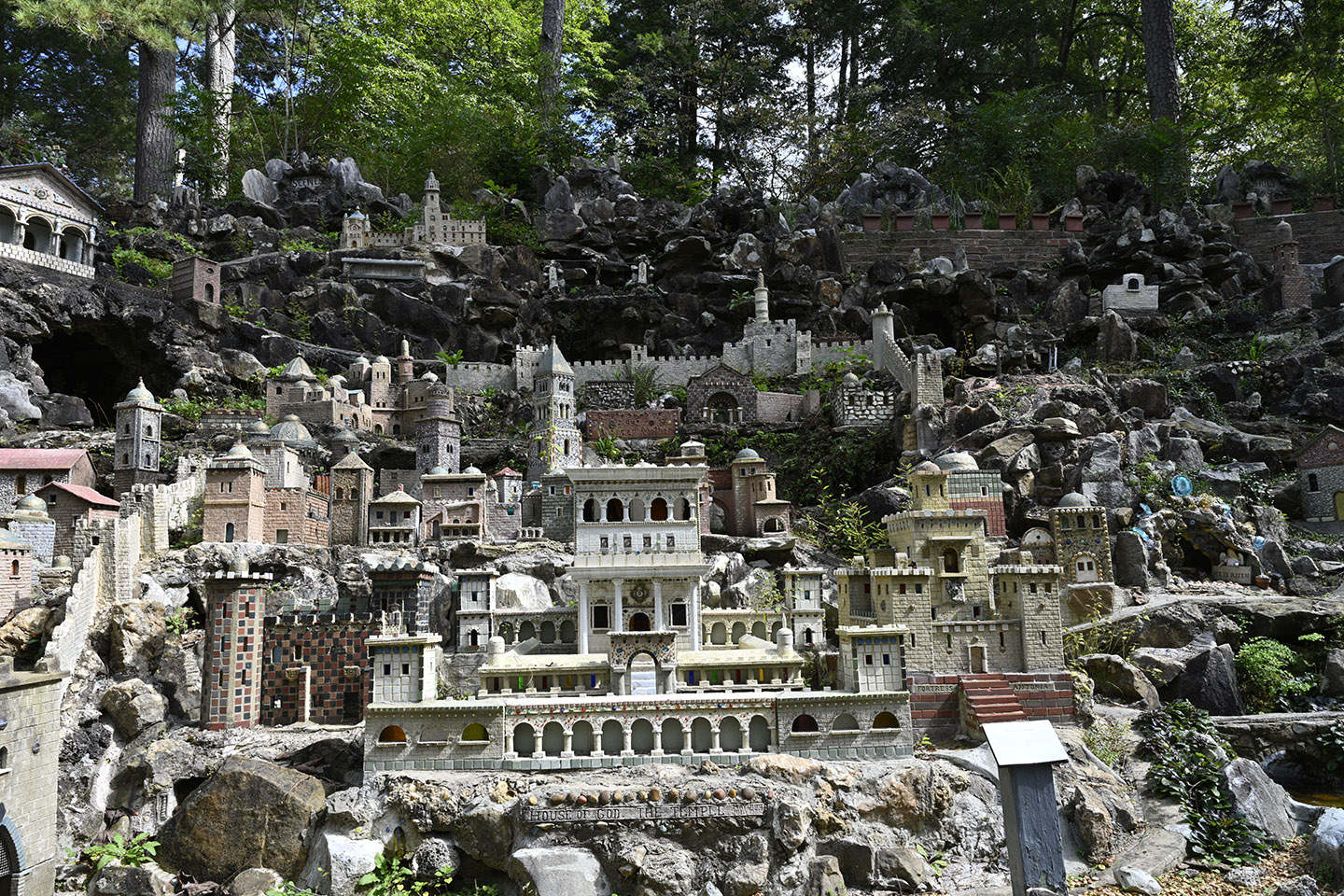 Navigating a tiny world of stone, mortar, and glass at Ave Maria Grotto in Cullman, Alabama.

He was a small man dressed in a long, dark robe in the Alabama heat. He carried a sack on his hunched back, filling it up with the things his neighbors no longer wanted: a broken plate, a single earring, an empty pickle jar or “anything shiny.” What others discarded, he meticulously crafted into a creation people still visit today, 60 years after the death of Brother Joseph Zoetl.

To my great-aunt Gem, he was “Holy Joe,” and she swore her cold cream jars were holding up the Temple of the Fairies in his miniature masterpiece, the Ave Maria Grotto in Cullman, Alabama, at St. Bernard Abbey. Looking at the found-object art, there is a good chance she was right.

Brother Joseph’s artistic nod to the fairies points to the fairy-tale life experienced by a man born Michael Zoetl in Landshut, Bavaria. His is not the prince-and-princess tale, but that of the unexpected hero. His mother died young, leaving Zoetl with his father, who soon married the classic wicked stepmother. Young Michael Zoetl, like all fairytale heroes, escaped death from both water and fire. After nearly drowning and burning to death, he was sent to America as a young teenager — cast out on a long journey to his destiny. In 1892, when he arrived at Ellis Island, St. Bernard Abbey had been formed the year before and had just opened a Catholic preparatory school and a seminary to train priests.

The Benedictines were recruiting monks to serve German populations in America. In 1866, Colonel Johann Cullmann founded the city bearing his name as a German enclave for workers.

Zoetl embraced the local and Benedictine motto of prayer and work, often to his detriment. A slight man with pre-existing back problems, he was injured while working in the belfry of the Abbey, which the brothers built themselves. The resulting hump crashed his dream of becoming a priest, as he was now deemed unfit. He later joined as a brother, with a name change to Joseph. In his new capacity, he ran the powerhouse, often working 17 hours a day to keep the coal burning. When not working, he spent time in the Alabama woods.

One day, a brother received a gift of 500 miniature statues of the Virgin Mary. Brother Joseph carved grottos for two of them. They were snatched up in the gift store, along with the next 498. A new hobby emerged as thousands of his creations sold worldwide. Soon, he took this divine inspiration a step further when a railroad wreck gave him a load of damaged Alabama marble. He began building permanent structures on the grounds of the Abbey.

By 1934, Brother Joseph’s fairy godmother must have waived her magic wand. His creations were attracting too many visitors to the brother’s domain, so he got his wish to take over the adjoining quarry. He set to work and in the next 24 years, filled the four acres with his prolific art.

The man deemed too frail for the priesthood drug marble slabs up hills. He teetered on the side of inclines while delicately stacking stones or pouring concrete. He stood on a ladder while forming concrete stalactites as he decorated a 27-foot high, 27-foot wide and 27-foot deep Ave Maria Grotto. None of the ceiling fixtures have fallen on the statue of the Virgin Mary, who cradles the baby Jesus in her arms. As the fairytale hero, he completed a superhuman task beyond his age and strength.

​Today, 125 miniatures line a trail rambling through what is now the Ave Maria Grotto. The buildings range from the Alamo and Hanging Gardens of Babylon to the City of Jerusalem and events tracing Jesus from birth to death. The great majority of the structures are religious shrines, churches, and representations, such as the Garden of Eden. Brother Joseph included the great places in the world, like the Leaning Tower of Pisa, castle of Tyrol, Great Wall of China, a pyramid and aqueduct, and a shout out to the Statue of Liberty.

The miniatures are even more remarkable considering he never saw them in real life. Only six of the 125 buildings ever crossed his visage: those from his hometown and St. Bernard. The rest were crafted from photographs and some from written descriptions. Brother Joseph’s imagination filled in the gaps. Few would say he missed the mark on any of his replicas.

A close look at the buildings show a craftsman’s hand in the cutting of slender rock building blocks, connected by thin layers of mortar. Small tiles, probably hand cut as well, and hand applied, still shine in the sunlight. Marbles decorate columns and arches, with old costume jewelry atop doors.

The entire effect is one of pure magic. The miniatures are so detailed, that it is easy to miss Hansel and Gretel and the chained dragon, the creatures in Noah’s Ark or the Castle Trausnitz from Brother Joseph’s home town. The latter name means “trust not,” a result of promises broken, a hint at the tragedy of his early life.

One of the most touching scenarios is the American flag, crafted from colorful marbles. It is surrounded with real miniature flags honoring the “boys of Bernard,” who gave their lives in war.

The real magic is seeing St. Peter’s Basilica rather than the old birdcage it is fashioned from or realizing the stunning blue cross in the Guardian Angel setting is made up of blue ink bottles. The Temple of the Fairies really does contain more than 12 cold cream jars, a testimony to the remarkably smooth skin of great aunt Gem.

Alabama enjoys a long and colorful history of folk art and found object art. Combined with Brother Joseph’s European perspective and German work ethic, this gift of art makes his dream of joining the priesthood come true. Few homilies reach 60,000 visitors a year. People from all walks of life can experience a quiet walk with God through his Biblical world.

Brother Joseph worked on his grotto up until he was 80 years old. His final work was the Basilica at Lourdes. He died at the Abbey in 1961 at the age of 83. His heroic work stands as a testament to the man who overcame all adversities to shine his light into the world.