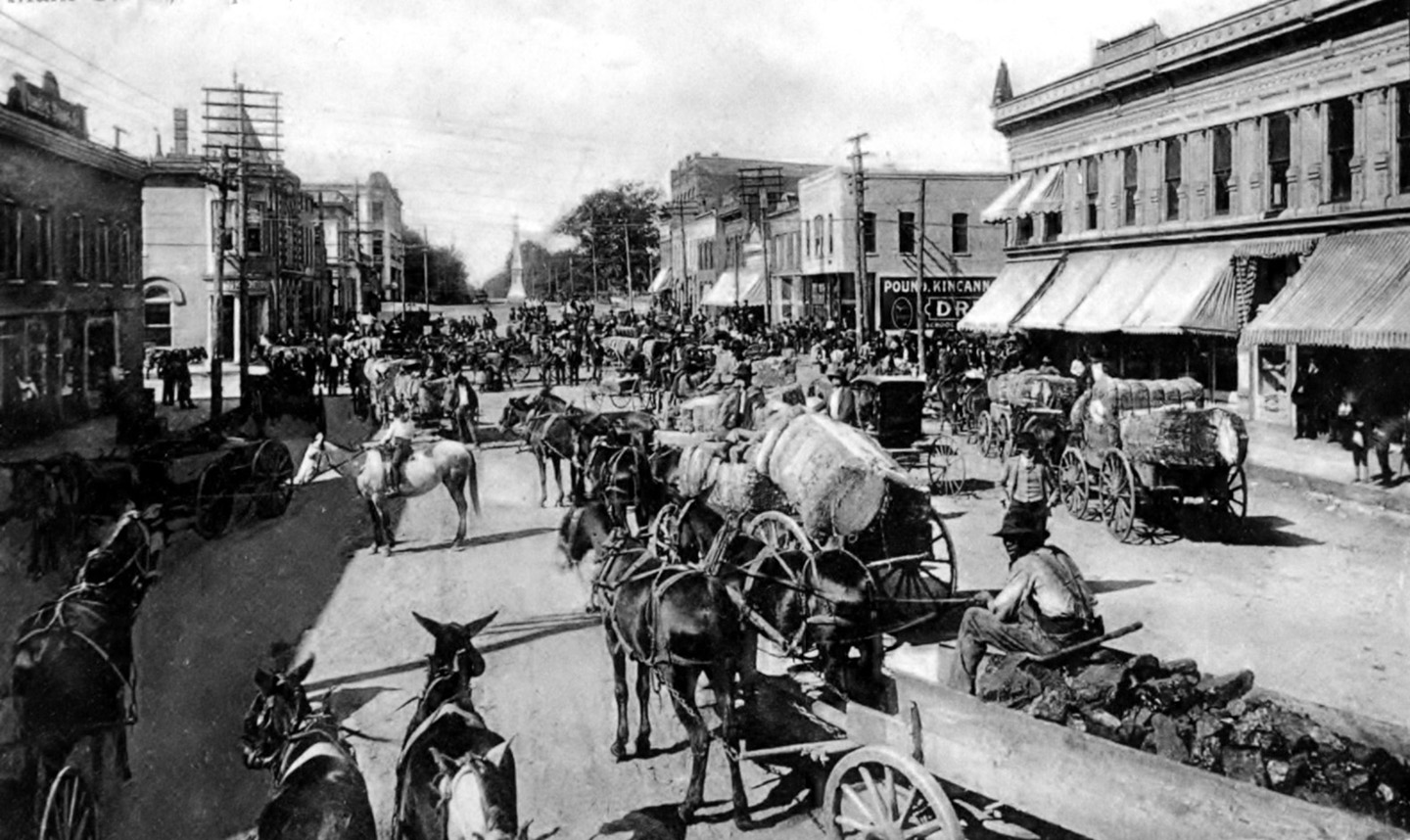 Tupelo has a lot to celebrate in 2020, starting with a New Year’s celebration to ring in its 150th anniversary and the 85th birthday of native son Elvis Presley.

Were it not for some civic-minded leaders, the Mississippi town now celebrating its 150th anniversary might still be called by its original name – Gum Pond.

“The early settlers called it Gum Pond because of all the Tupelo gum trees and because there was a pond here,” said Leesha Faulkner, curator of the Oren Dunn City Museum.

When the city was incorporated in 1870, however, founding fathers decided a better name was needed. “They named it Tupelo because the area was rich in native Tupelo gum trees,” Faulkner says.

Born in Tupelo, Jack Reed Jr. said he has seen many changes in his hometown. “We had a 50th high school reunion this month and two things my fellow classmates said they noticed…  we have a lot of great independent restaurants in the downtown area now and we put our downtown on a ‘road diet.’”

By that, Reed says, he is describing how the Tupelo road system once seemed designed to get truckers and motorists through town as quickly as possible. “The downtown was a great place for cars but not for people,” he remembers. “Now we have bicycle lanes on each side, trucks are now going around town instead of through downtown, and we have parallel parking which has made downtown a lot more pedestrian friendly.”

His family-owned business, Reed’s Department Store on Main Street, also will be celebrating its 115th anniversary in 2020. Founded in 1905, the store and the town sort of grew up together, Reed says.

“When my grandfather R. W. Reed Sr., opened the store, it carried what people needed back then when our customers were riding horses or traveling in wagons,” says Reed, who is president of the family business and a former mayor of Tupelo.

“We carried everything from food to saddles,” Reed says. “We sold the first dress in Tupelo back in the 1920s. Before that, women made their dresses; they made most of the clothes.”

The history of Tupelo is fascinating, Reed says. Originally inhabited by Chickasaw Indians, the local area saw Spanish explorer Hernando De Soto pass through in 1540. But he didn’t stay long. With a reputation as fierce fighters, the Chickasaws drove De Soto westward to his discovery of the Mississippi River.

The Chickasaws also established an important route of commerce with the Natchez Indians to the south that still exists today. The historic Natchez Trace linked the fledgling Gum Pond to the outside world.

Today, Natchez Trace Parkway is administered by the National Park Service and runs 444 miles from Natchez, Mississippi, to Nashville, Tennessee. Located close to the road’s halfway point, Tupelo is home to the Natchez Trace headquarters and visitor center.

Another major transportation boost was the arrival of the railroad in 1850. “The railroad is essentially what made Tupelo,” Faulkner says. “The Mobile & Ohio Railroad ran along what is now Front Street.”

That important railroad became a battleground during the Civil War when both the North and the South wanted to control it. In July 1864, Union troops fought the Confederate cavalry which wanted to stop the railroad from delivering supplies for the Union campaign against Atlanta. Neither side could claim a clear victory but Union troops did succeed in their main goal of keeping Confederates from taking the railroad.

Listed on the National Register of Historic Places, Tupelo National Battlefield Site is located along Main Street. The battlefield no longer exists but the one-acre memorial site honors the more than 2,000 men killed in the battle.

Incorporated on July 20, 1870, Tupelo became a major manufacturing and rail distribution center and was the first city in the nation to provide its citizens with dependable, inexpensive electric power through the Tennessee Valley Authority.

“That was in 1934 and President Franklin Delano Roosevelt himself came to Tupelo to make the announcement,” Faulkner says. ‘His wife Eleanor came with him and she went around to look at housing. As a result, the WPA spruced up and built houses here in Tupelo.”

Reed’s had the honor of becoming the first air-conditioned store in northern Mississippi. “At first, some people were afraid to come in,” Reed says. “There was a story going around that if you walked into air conditioning and then walked out into that 100-degree heat, you would get the flu. But once people came in, they decided they liked air conditioning.”

In the spring of 1936, Tupelo was hit by one of the worst-ever natural disasters. A tornado leveled 48 city blocks and more than 200 homes, killing 233 people and injuring more than 700 people. Hardest hit was the old Gum Pond neighborhood which was virtually obliterated.

Among the survivors was a three-month old baby. “We didn’t know who he would grow up to be,” Reed says. “Did his birth influence the future of Tupelo? Definitely. We get people from around the world who come here to see where he was born and grew up.”

That baby, of course, was Elvis Presley and Reed’s Department Store has one of the first photos of Elvis. “We have a 1934 photo hanging on our wall that shows a pregnant Gladys Presley taken at a July 4th picnic. At the time, Gladys worked for a garment manufacturer also owned by the Reed family.”

Shortly before dawn on Jan. 8, 1935, Gladys Presley gave birth to twin boys. The first baby was born dead. The second grew up to become one of the most famous men in the world.

The two-room shotgun shack where Elvis Presley was born stands in stark contrast to the Graceland mansion where he died in Memphis on Aug. 16, 1977.

“That bothered Elvis for the rest of his life,” Harris says. “Even as a kid, sometimes we would be talking and Elvis would start crying, saying, ‘I lived and he didn’t.’”

For the first three years of his life, Elvis grew up in this cramped birthplace, with only a front room where the family slept and a kitchen. “They were poor, but everybody around us was poor,” Harris says.

When they could sneak away, Harris says he and Elvis liked to go skinny dipping in the creek. “We’d just jump in naked,” he recalls. “We barely had clothes to wear, and we sure had no swimming clothes. We couldn’t go swimming in our clothes because if we went home with wet clothes we’d be in a lot of trouble and get whipped.”

The annual state fair in Tupelo was a big deal that youngsters looked forward to every year.

“Of course, we didn’t have much money to go, but we’d sneak over the fence,” says Harris, a retired policeman. “It wasn’t but a few years later that people were paying to see Elvis at the fair. We had a big laugh about that.”

In fact, it was that performance at the state fair when Elvis was a rising star that saved his old birthplace. Elvis signed over the money from a 1956 performance for the city to buy the property for a park for neighborhood children. But it wasn’t until the mid 1970s that the birthplace was opened to the public.

“Prior to that, it was in really bad shape,” says Dick Guyton, executive director of the Elvis Presley Birthplace. “People were shocked when they found out that was where Elvis used to live.”

Today, the Elvis Presley Birthplace attracts about 100,000 visitors a year and has grown to include a museum, memorial chapel, Walk of Life, fountain of life, story wall, gift shop, theater, conference space, church and statue of Elvis at age 13. The newest addition is two statues atop a hillside. One depicts a young Elvis sitting on a milk crate, dreaming of the future. Behind him stands a statue of Elvis the legendary performer that boy would become.

When Elvis was 13, his family headed to Memphis to try and make a living. At the Birthplace is a 1939 green Plymouth, a replica of the car the Presleys drove to Memphis seeking a better life.