Spelunking in the South 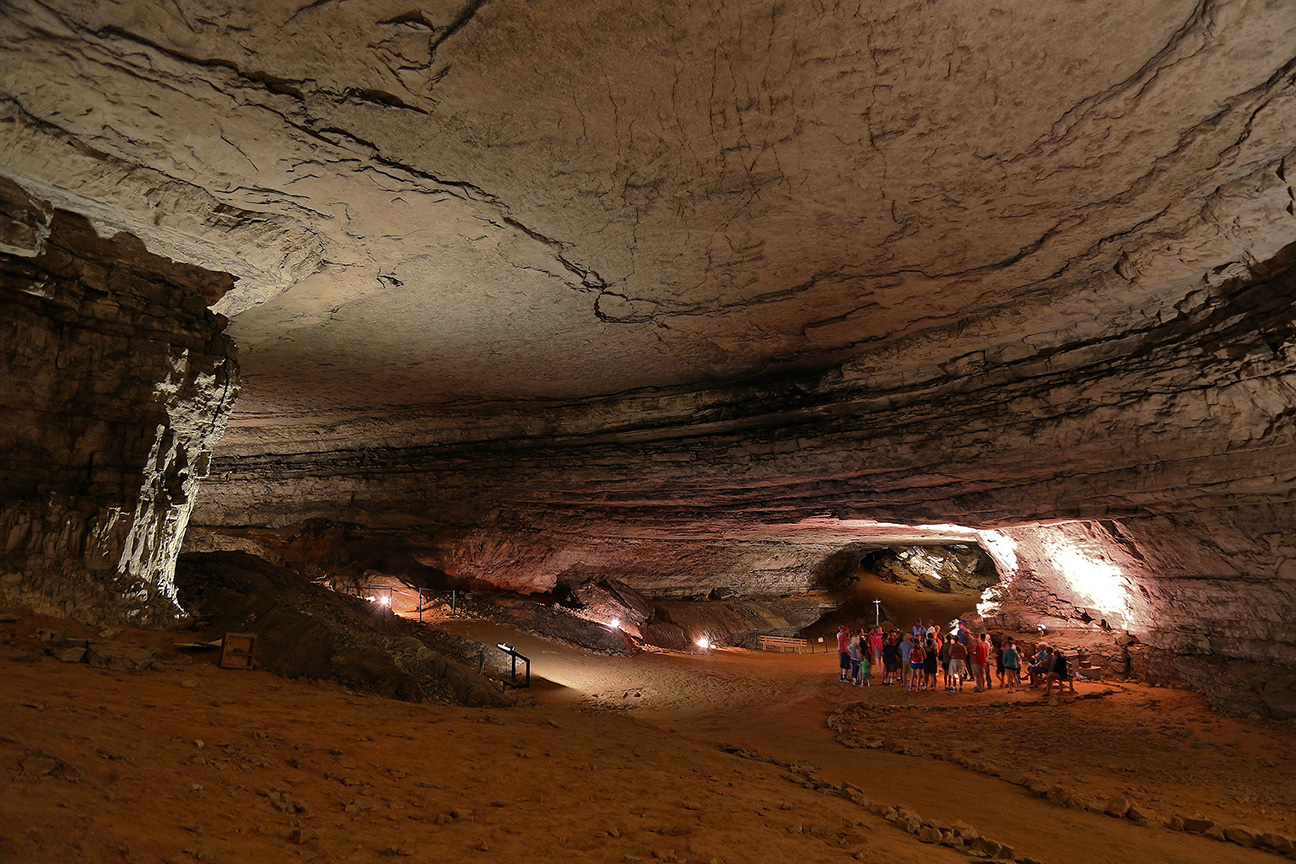 Southern caves offer stalactites and stalagmites, but spelunking explorers will find some other underground surprises – like kangaroos, waterfalls, and concerts.

My best high school friend was a tour guide at Cumberland Caverns, a commercial cave on the Cumberland Plateau between Nashville and Chattanooga, Tenn. He regaled me with cave stories — mainly about the odd, but sincere, questions visitors asked.

Among the more challenging to address with a straight face: (1) Are the lights natural? (2) How many miles of undiscovered cave are there? (3) When does the tide come in?

My friend never could answer the tide question, but he understood that caves are truly mysterious to many people and that his job was to demystify the subterranean world.

Caves open for tours (generically called show caves) are abundant across the South. Most are private businesses, where cave guides’ narratives can range from hokey to thoroughly professional, while others are run by the National Park Service and the USDA Forest Service, where you can expect straightforward presentations.

Cave tours are intriguing excursions into corners of the natural world otherwise unseen. They entertain young and old, and almost all deliver the experience of true darkness. It’s practically a law of cave tourism that guides turn off the electricity momentarily, proving that none of the lights down there is natural.

Here’s a four-state cave sampler. They are especially delightful as summer’s heat wears on since Southeastern caves are steady at about 58 degrees.

Kentucky
Let’s start with a biggie, indeed a mammoth one, as in Mammoth Cave National Park. Under Kentucky’s rolling countryside is the most extensive cave system on earth. Its extent is undetermined, but there are 390 miles of surveyed passageways, three times more than any known cave. There may be 600 more miles, geologists say.

People began poking through Mammoth Cave 4,000 years ago. Exploration stopped about 2,000 years ago and began anew with the cave’s rediscovery in 1798.

Early commercial exploitation was to mine saltpeter for gunpowder, but the cave was an attraction itself by 1816. In fact, Mammoth Cave helped create American tourism. A self-educated slave, Stephen Bishop, discovered many miles of the cave and became a legendary guide. He was only 17 in 1838 when he began leading tours, calling it a “grand, gloomy and peculiar place.”

This part of Kentucky is honeycombed with caves. Consider these two:

• Nearby Mammoth Onyx Cave, open since 1922, offers 30-minute tours, a good choice if you’re timid about being underground. Above ground, it’s a treat for youngsters because it is part of Kentucky Down Under Adventure Zoo. It’s the only cave attraction with kangaroos, lorikeets, kookaburras, and other animals from Australia and elsewhere.

• Lost River Cave near Bowling Green has one of the largest natural cave entrances in the eastern United States — 150 feet wide — big enough to have been a nightclub well into the 1950s. True to its name, a river disappears inside the cave, but the subterranean boat tours always return.

Arkansas
Treasures lie underneath the Ozark Mountains, and the big surprise is Blanchard Springs Caverns near Mountain View. It’s the only federally owned show cave not in a national park and the only one administered by the USDA Forest Service. This gem of the sprawling Ozark National Forest (1.2 million acres) also contains the highest point in Arkansas, known as Mount Magazine.

A major selling point at Blanchard Springs Caverns is the wheelchair-accessible Dripstone Trail. That means everyone can marvel at the stalagmites, stalactites, columns, and flowstones that adorn the cave. This is a “living” cave, which means mineral-laden dripping water still is creating formations — just don’t expect to see growth while you’re there.

The Discovery Trail that explores the middle level of the cavern system is longer and more strenuous — 1.2 miles and 700 stairs — and if you want to get down and dirty, check out the Wild Cave Tour. Hard hats, kneepads, gloves, lights, and belts for this three-to-four-hour adventure are provided.

• There’s a two-fer at Harrison. Mystic Cavern, which has a 30-foot-tall formation called the Pipe Organ, and Crystal Dome Cavern, which features a room almost 70 feet high and a massive dripstone called the Crystal Bell, are a single attraction. Native Americans knew about Mystic Cavern, but Crystal Dome, whose entrance is only 400 feet away, wasn’t discovered until 1967 when a piece of heavy equipment on the surface disappeared into the void.

• Cosmic Cavern is a quiet stop between the bustle of Eureka Springs, Ark., and Branson, Mo. Among its bragging points are a nine-foot-long soda straw formation, two “bottomless” lakes, and an elevated temperature — 64 degrees

Tennessee
Two show caves in Middle Tennessee share the bond of national television exposure. PBS’s “Bluegrass Underground” series began deep inside Cumberland Caverns near McMinnville. After several seasons (and Emmy Awards), it moved about 40 miles to The Caverns near Pelham.

The venue at Cumberland Caverns, still used for concerts, is the jaw-dropping Volcano Room, which is two stories high and 333 feet underground. A special embellishment is a sparkling chandelier that once hung in the Loew’s Metropolitan Theatre in New York.

“It’s a dream come true,” said “Bluegrass Underground” founder Todd Mayo, when the show relocated to The Caverns in 2018. Concerts for the 10th PBS season are scheduled to begin in November.

The performance space is in Big Mouth Cave and can seat 850 (or 1,200 for an SRO event). It pairs with Big Room Cave for daily tours. Big Room Cave earns it name — it features a room more than three football fields long. The Caverns was the first show cave to open in Tennessee in 50 years.

Cumberland Caverns, of course, continues its tradition of tours and has an especially big menu of choices, starting with walking tours, progressing to let’s-get-muddy explorations and culminating in several that include staying overnight. None, of course, replicates the three frightful nights discoverer Aaron Higgenbotham once spent there.

Two other Tennessee caves have a watery theme:

• Ruby Falls in Chattanooga has the nation’s tallest and deepest underground waterfall (145 feet). Tours include a 260-foot descent by elevator to a point about 1,120 feet under Lookout Mountain.

Alabama
Russell Cave National Monument is small by National Park Service standards (just 310 acres), but it tells a huge story. Archaeologists began studying this massive rock shelter in 1953 and concluded it contains one of the most complete records of prehistoric cultures in the Southeast. Human visitation and habitation go back more than 10,000 years.

Russell Cave is off the beaten path near Bridgeport in northeast Alabama but less than an hour from Chattanooga. If you visit, you’ll be among only about 30,000 people a year who learn this cave’s story — one without chandeliers, boat rides, concerts or kangaroos.