Story and photography by Debi Lander 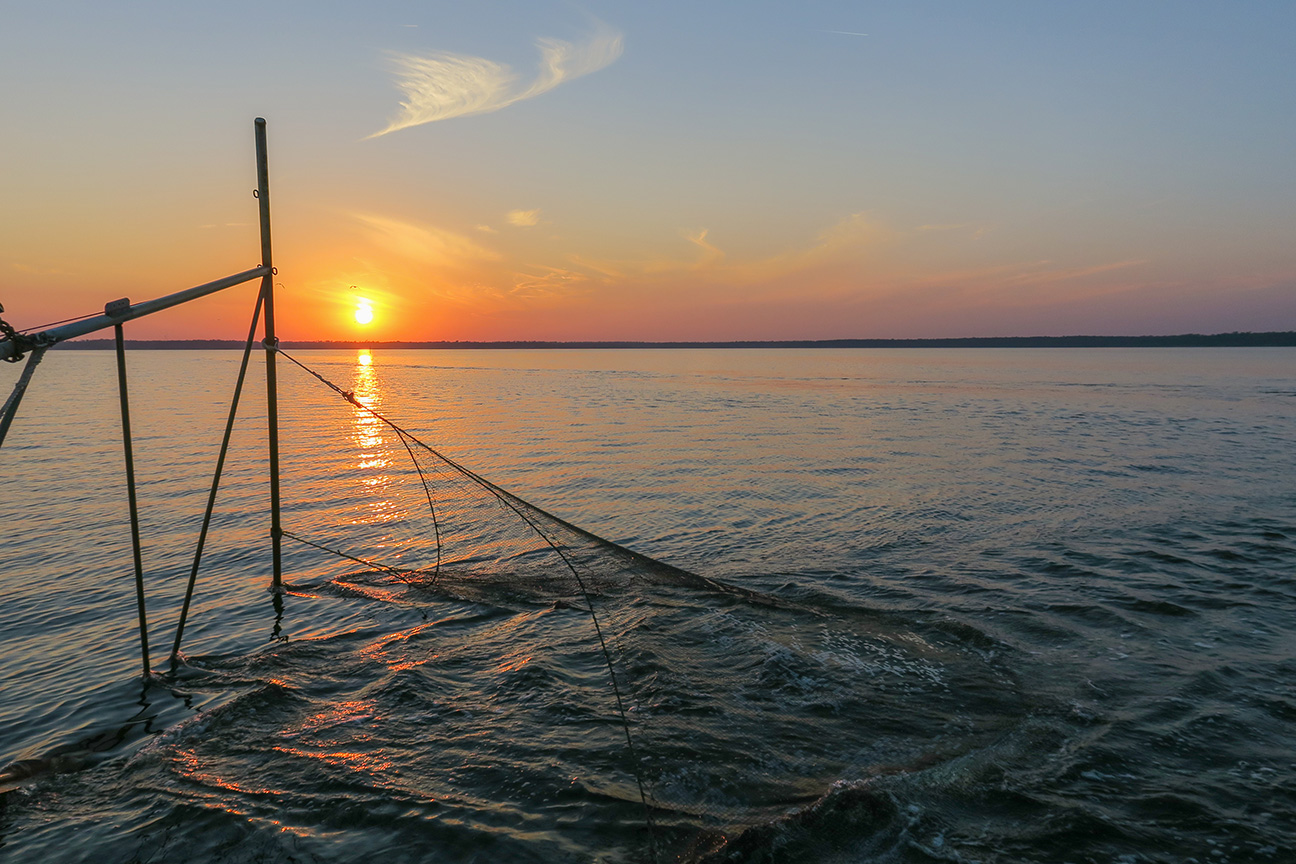 Visitors to the quaint seaside town of Sneads Ferry in North Carolina can be shrimpers for a day.

Spend a week in North Carolina’s Onslow Country, and discover the unexpected: a north-flowing river, primitive camping on Bear Island, a restaurant whose breakfast fritters look like banana splits, and — one of my favorites — cruising on a shrimp boat.

The small town of Sneads Ferry (population 28,500) talks big, claiming the title “Shrimping Capital of the East Coast.” Sneads Ferry sits next to Camp Lejeune in Jacksonville, N.C., home of the U.S. Marines’ most extensive training facility. They both belong to coastal Onslow County, along with Richlands, Swansboro, and North Topsail Beach.

The Sneads Ferry Marina acts as the town hub, where visitors meet Captain T.J. Jarman of Reel Livin’ Fishing Charters for a shrimp boat excursion. Jarman, a North Carolina native, grew up working with his dad on a commercial fishing boat.

“I guess it was in my blood,” he says. “I can’t imagine living anywhere else.”

Jarman conveniently strolls from his breakfast table across the street to the boat dock lined with tall shrimp boats. At his brother’s urging, the captain earned his charter license 13 years ago. He has been offering participant-friendly boat tours ever since.

Visitors cruise along the New River, the only major river in the United States to flow north. The contradiction to its name came from its discovery in 1749, revealed to settlers in the “new” sections of North Carolina and Virginia. The New River is one of North America’s oldest waterways, created at least 10-to-360 million years ago. In fact, some geologists consider Egypt’s Nile River the only one older in the world. Unexpected, right?

Guests who hop aboard the Faith & Hope, a 35-foot wood trawler with 30-feet high skimmer frames (wings), learn all about the workings of a shrimp boat and the process of dragging nets and hauling the scrumptious and valuable catch.

After a review of safety procedures, participants can grab a drink and relax, but hold on for the action that awaits.

Jarman and the crew maneuver the boat, searching for promising waters and operate the hydraulics it takes to deploy and return the massive nets. She’s a top-heavy vessel due to the skimmer frame’s height, so Jarman sets the pace at a comfortable 6-to-8-knot speed. The crew welcomes guests to sit in the front cabin, but there is a strong preference to stand aft (at the rear, for us landlubbers) to get a close-up view of the lowering of the frames into the water. Just before they descend, the boat slows to 1.7 knots per hour.

“The shrimping process was fascinating,” say passenger Liz Mays. “The seemingly complex series of maneuvers was simple muscle memory to the well-seasoned captain and first mate.”

The nets drag through the water, creating a funnel that forces the shrimp toward the tail bags at their rear. Jarman uses two fish excluders that allow small fish entering near the tail bags to swim out. The crew carefully throws back any larger fish caught with the shrimp.

Unlike big trawlers that keep their nets down for an hour or two, Jarman pulls his after about 15-20 minutes. Anticipation builds as the catch is raised and the lively bundle empties onto a large table. The moment calls all hands on deck (guests included) unless stingrays join the mix. The crew kindly removes those first.

The ensuing slimy scramble separates shrimp and crabs while the other fish are thrown back into the sea. (Rubber gloves and tongs thankfully are supplied.) A wild jostling of marine life occurs: fish flip about, crabs scuttle fast, and water squirts and sprays everywhere. A first look at the shrimp can be surprising — the crustaceans are brown, not white or the cooked delight of a pretty coral color. The crabs go into a separate bucket from the shrimp.

All the while, seagulls provide a loud soundtrack from above, but guests’ giggles and yips prove even more piercing. Once is not enough for pulling in shrimp; the process repeats three or four times during the work outing, as shrimp buckets fill and the surprises continue.

If witnessing the operation and sorting of the catch wasn’t enough education for the tourists on deck, first mate Danny identified the different fish species before tossing them overboard with pinfish, hogfish, and croakers the most popular.

The New River offers two seasons for shrimping, one in midsummer for brown shrimp, and the other in the fall, usually late August through October for white shrimp. Depending on the season and the tides, charters run either during the day or in the evenings. No weekend shrimping is permitted as the New River closes for shrimping from 9 p.m. on Fridays until 5 p.m. on Sundays. Like all charters, the wind and weather must be right for sailing.

Charters cost $400 for a four-hour trip, but the price can vary depending on the group’s needs. Guests go home with up to 50 pounds of the freshest shrimp imaginable, and perhaps crabs and flounder, depending on their size. The remainder goes to the captain and the crew.

Booking for shrimp charters is best handled over the phone by calling Jarman at (910) 330-7785. Faith & Hope can accommodate groups of up to six people. The boat is equipped with a camp toilet and safety rails, and children under 13 must wear life vests at all times.

Sneads Ferry Shrimp Festival
The annual Sneads Ferry Shrimp Festival celebrates its 50th year with musical entertainment, arts and crafts, and food from Aug. 6-8. The festival began in 1971 to honor the fishing village and has continued every year on the second weekend in August, which is the peak shrimping season. This fun event spreads over 10 acres purchased to serve as its permanent grounds. Notable events include the parade, the Shrimp Festival Kings and Queens pageant, a shrimp heading contest, a car show, and several military exhibitions. Annual attendance is over 10,000 people.

If shrimping is not your thing
Onslow County offers other water-oriented experiences in nearby Swansboro, another delightful North Carolina seaside town. Go kayaking where the White Oak River meets the Intercoastal Waterway, enjoy a sunset cruise on the Lady Jane Swan Boat, and check out Hammock Beach State Park. Most folks ride the park ferry over to Bear Island for a day of beaching, shelling, or fishing. You’ll also find boutique shops and fine restaurants, including Yana’s, the place to get yummy fruit fritters decorated with whipped cream and cherries.

Swansboro is a popular destination for transient boaters. The town offers three public docking facilities in the downtown area.

The town also hosts an annual Mullet Festival the second weekend in October along its historic downtown, one of the oldest festivals in North Carolina. Started in 1954 to celebrate the new bridge opening in town, local mullet fishermen held a fish fry. The tradition has grown to rides, amusements, a weekend of music with live bands, crafters, and a down-home parade to kick things off.