Castles
Made of Sand 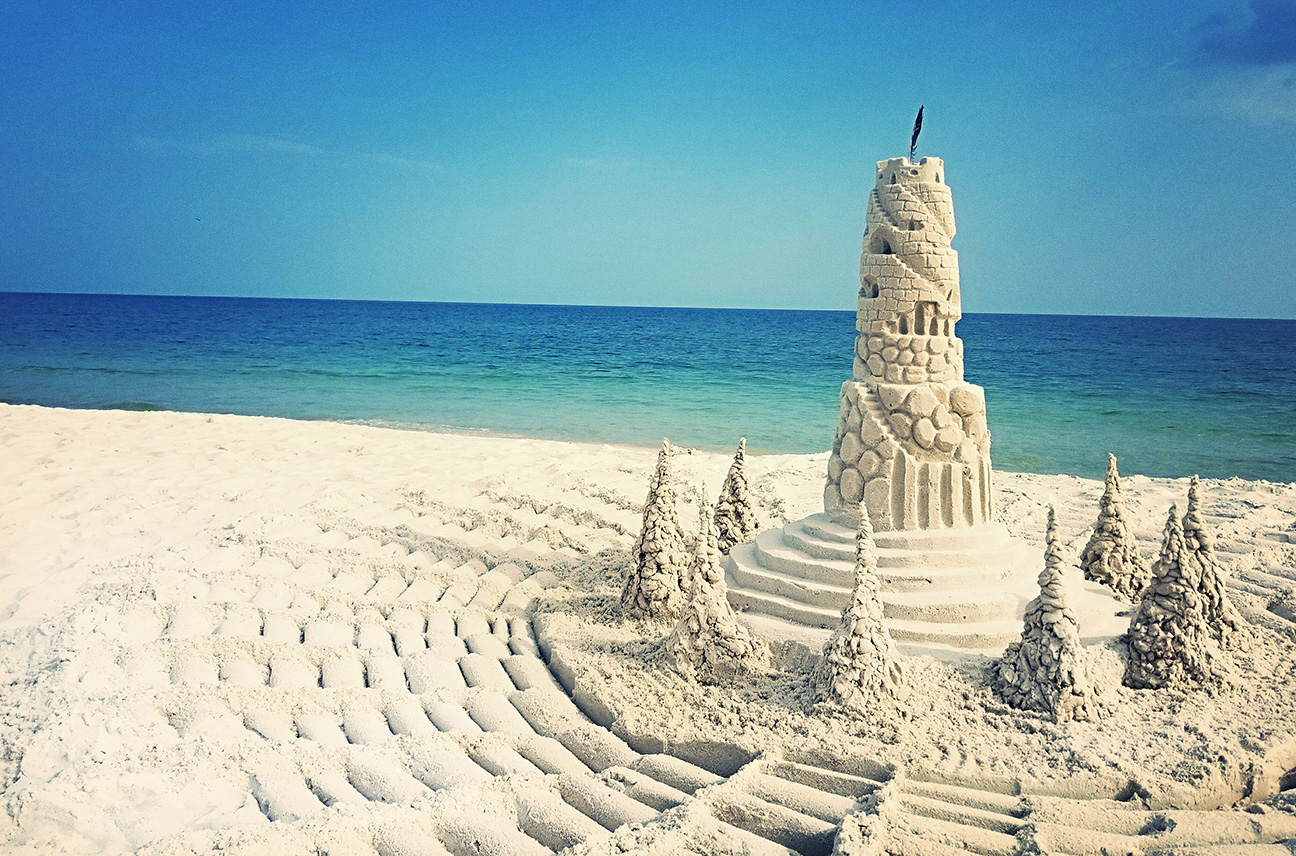 Musician Jimi Hendrix once wrote, “And so castles made of sand, fall in the sea eventually.” Professional sand sculptor and owner of Alabama’s Sand Castle University, Janel Hawkins would have to agree. Hawkins spends hours creating elaborate castles for proposals, weddings, and other special events, but like the ceremonies they accompany, these castles made of sand aren’t permanent.

“If you have the right techniques, sand will be strong but it will never last,” Hawkins says.

Unlike her subject’s impermanency, couples come to her in hopes of celebrating their entire lives together, commemorating the event with a Hawkins original. An architect, builder and sometimes even guardian of such wonders, Hawkins successfully carves her special niche in the community one bucket of sand at a time.

Graduating with degrees in business and psychology from Florida State University, the 20-something actually found her calling her freshman year. She answered a Craigslist ad for a would-be sandcastle teacher with no prior experience.

“I thought that was great because I didn’t have any previous sand sculpting knowledge, even though I’ve lived on the beach my whole life,” Hawkins says.

Hawkins tried out and was offered the sculptor’s position for the Destin-based company. She went on to manage the company before eventually moving back to her hometown of Fort Morgan, Ala., where she started Sand Castle University.

Now in her fourth season, Hawkins admits there’s no one else in the area that does what she does in her small community that spans the areas of Fort Morgan, Orange Beach, and Gulf Shores. For people seeking sand castles experience in Florida’s Panhandle, she refers them to her closest competitor in Perdido Key, Fla.

Regardless, those who do create sand castles in and around Gulf Shores respect each other’s turf or shore, she says. “We all have our own styles.”

Her list of building tools is forever evolving to include everyday items like vegetable oil spray that acts as a lubricant so that when clients pull the mold off, the castle’s sides are smooth and ready to be transformed. Cake spatulas, straws, and plastic shovels are other go-tos. A melon baller works well to carve out the front door to a castle. But, the most important tool she insists is imagination.

During high season, you’ll most likely catch Hawkins pulling her cart of tools out to the beach where a family, girls weekend getaway, or even a company’s team-building exercise awaits. That’s one of the beauties of Sand Castle University. She comes to the clients and documents the occasion throughout the castle-building lesson with a GoPro time-lapse video, which she later emails to the participants.

There’s a myriad of finished castles beaming from past participant’s beachfront “property” on the Sand Castle University Instagram page. Among them are castles by budding sculptors from Hawkins classes as well as her professional handiwork commissioned by ESPN, and from the many proposals and wedding ceremonies in which she’s been honored to take part.

She remembers a certain bridegroom surprised by his future wife with a “Beauty and the Beast” castle with the words “Will You Marry Me” scrolled upon its entrance, complete with an enchanted rose and pedestal, of course.

“If there’s a fairy tale castle, I’ve probably looked it up at some point,” she says.

Hawkins drew out a few sketches for the groom-to-be with varying details dictating the castle’s price. After deciding which castle fit his ideas, Hawkins got out to the beach on proposal day four hours prior to his popping the question.

But, as any romantic fantasy contains a few twists to the plot, her “Beauty and the Beast” castle did not disappoint.

“Usually there are families around and asking questions,” she explains. “I was running out of time, yet needed to sit down for a minute. When I turned around this little girl had her hand on the tower. I yelled, ‘Stop, please don’t touch that!’ She was crying and the parents were so mad.”

Hawkins rushed to remove the tiny fingerprints from the tower, annoyed that even after explaining someone had paid hundreds of dollars for her masterpiece, the spectators were inconsolable.

“People are usually pretty respectful of my art while I’m doing it,” she says. She also now asks that people within a 20-foot radius of the castle vacate the area prior to proposal time. They usually graciously oblige, she says, almost like they’re in on the big reveal.

In the end, the prospective groom’s romantic “Beauty and the Beast” castle set him back $750 — mere dollars per-square-foot, and quite the unique proposal story.

Beach weddings present creative ways to incorporate a Hawkins design into the ceremony. Couples often take sand from the castle as a memento, and some use the sand for their union ceremony, which is normally done with candles. Each takes a cup of sand and then together pours the sand into a larger or common container.

While she’s never had a florist come to the site during the castle’s build-out, she often pays the wedding’s florist a visit so that she may utilize the bride’s flowers in her creations. Planning with a cushion of time for the actual build is crucial, as Hawkins needs daylight to work. Naturally, afternoon and evening weddings are her sweet spot. With those gorgeous Alabama sunsets, she’s not really had issues with convincing a bride otherwise.

“A lot of times I’m an afterthought,” says Hawkins who ideally needs 2-to-3 weeks for consultation and planning. On average though she says she normally gets two weeks, and it’s rare to get a year’s advance notice. Yet, she’s only done one with a single day’s notice. “If I’m available, it’s all good,” she explains, adding that she refuses to cancel on pre-bookings. Regardless, she recommends a weather-contingent, back-up date which she’ll reserve free of charge.

Just as the Tibetan Buddhist’s sand mandala ritual teaches that everything is ephemeral, Hawkins’ sculptures must be smashed during sea turtle season, which occurs May to October. Some turtles along the Gulf Coast are protected by the Endangered Species Act which prohibits any disturbance of the nesting turtles, hatchlings, and/or their nests. If there are holes or obstructions caused by the building or take-down of the castle, the turtles get disoriented. So, after the ceremony, happy couples often partake in the castle’s destruction with the entire thing captured on Hawkins’ GoPro keepsake.

During a recent sand castle-building class, Hawkins grabbed a nearby seagull feather and perched it atop a student’s personal architectural endeavor as if to add a punctuation mark – its crowning glory rest assured. She smiled and reflected upon the fact that she is not her target demographic. “I’m not the marrying type. But, if I were, eloping would be my choice.”

The tide pulled the castle remnants out to sea creating a blank canvas for another day of castles made of sand.