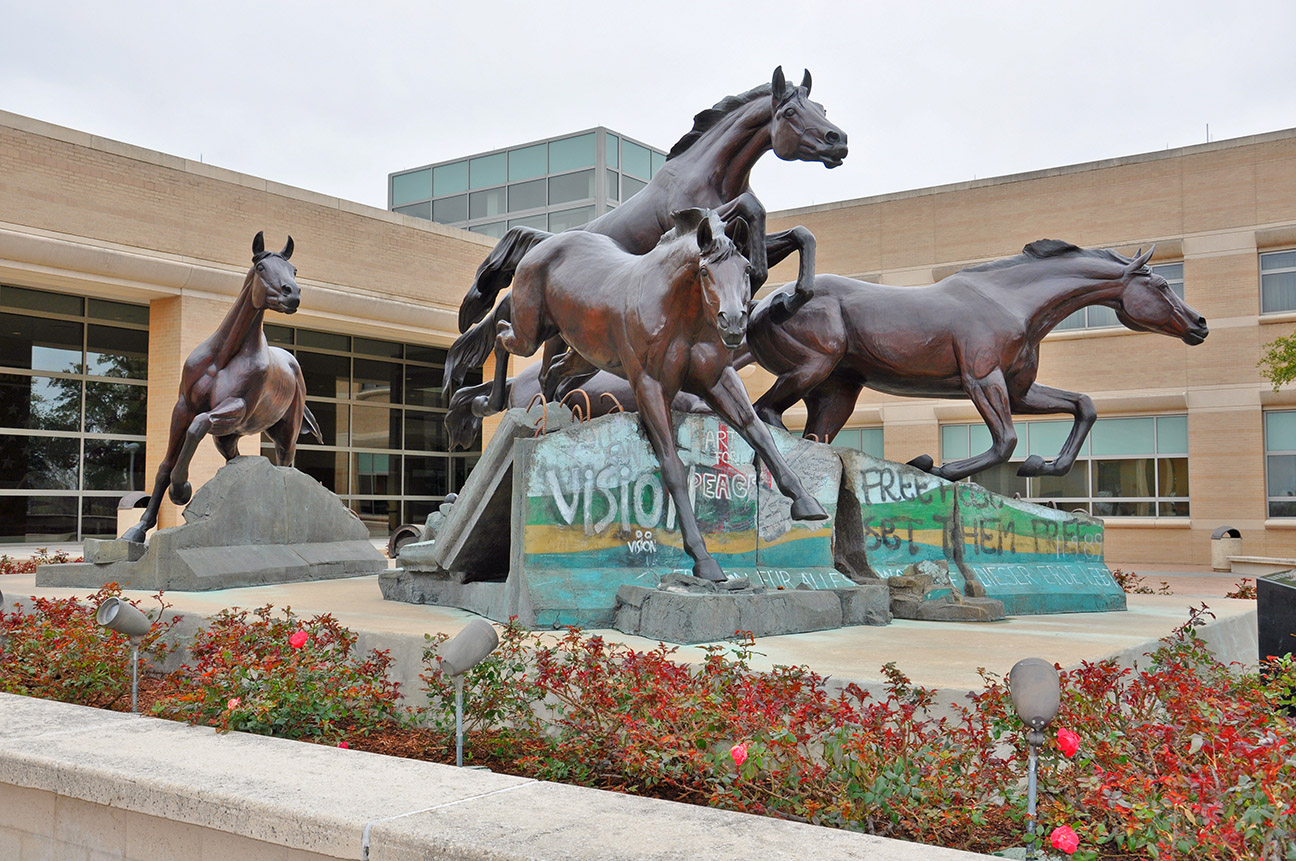 As President’s Day approaches, think about exploring the homes and museums that honor our nation’s former leaders.

Before they became this nation’s top commanders in chief, U.S. presidents had lives that were similar to our own. Extraordinary drive and ambition, remarkable character, historic events, and a great deal of luck shaped them into leaders. Visiting presidential museums is the best way to understand how environments influenced these men and how they in turn impacted history.

Sites honoring U.S. presidents are scattered throughout the South and are great places to spend a day. Most presidential museums and libraries have stepped into the 21st century with family friendly, interactive exhibits that entertain and educate. Here are a few of our favorites that appeal to all ages.

Andrew Jackson was a legendary figure even before he became the seventh U.S. president. He enlisted in the Revolutionary Army at age 13; he asked for 3,000 volunteers from Tennessee in the War of 1812, but 5,000 showed up, thus giving the Volunteer State its nickname; and his victory in the Battle of New Orleans launched him into the national spotlight in 1815. He had a notorious temper, but his heart was big – he fostered 20 children over his lifetime and he never stopped loving his Rachel, who died before he went to Washington.

“I was born for a storm, and calm does not suit me,” Jackson wrote to President James Madison, the fourth president and a founding father. However, The Hermitage and its park-like setting belie his words, because the home and its more than 1,100 acres are an oasis near Nashville’s urban development.

Jackson’s classical-style mansion is definitely the centerpiece of the property – literally and figuratively. Built in 1821, the home contains 90 percent of original artifacts, including wallpaper in the foyer that is 182 years old. More than 200,000 visitors a year tour The Hermitage, which is considered one of the best preserved of early U.S. presidential homes.

Visitors should make time for “Born for a Storm” exhibit at the welcome center to learn about the contentiousness of politics in Jackson’s day. Arguments were often settled with a duel, as Jackson had to do with attorney Charles Dickinson. A new visitor’s experience includes a dueling demonstration that occasionally allows visitors to participate.

“We need to engage with history in open and honest ways,” says Mike Zimmerman, Hermitage director of interpretation.

Just as dueling is honestly discussed so is the issue of slavery. “We talk about slavery up front and refer to Jackson’s slaves by name,” explains Zimmerman.

A commemorative memorial service is held annually at The Hermitage Church. This year’s event is set for Saturday, Feb. 29, and will feature music and special remarks, followed by a procession to the slavery memorial, “Follow the Drinking Gourd,” located behind the church.

Operated by the National Park Service, the Jimmy Carter National Historic Site and Preservation District includes the Plains High School, the alma mater of both President and Mrs. Carter;  the restored Plains Depot, which served as Carter’s campaign headquarters in 1976; the Carter Boyhood Farm and Home; and the present-day Carter Home, which is not open to the public.

The Jimmy Carter Presidential Library in Atlanta, Ga., is part of the National Archives system of presidential libraries (see sidebar), but it’s the Plains site that gives the most insight to Carter’s early life.

The Plains High School, which operated as a school from 1921 until 1979, is now the park museum and visitor center. Exhibits explain the Carters’ lives in Plains, including political and business careers, education, family, and post presidency.

“Walking the halls of old varnished wood and painted-over brick, you feel transported back in time. It smells like an old school. This is where you can see the Nobel Peace Prize Carter won in 2002,” says journalist Blake Guthrie of Greensboro, Ga., who visited recently. “It’s all worthwhile, but I would recommend more time carved out for the boyhood farm.”

Carter’s boyhood farm is a living history museum that shows a broader picture of the boy who grew up in the middle of nowhere to become a U.S. president. Authentic details of farm life in the 1920s and ’30s are interesting, but it’s the personal touches that stand out. For example, visitors learn about an African-American couple who worked and lived on the farm. In a voice recording, the former president recalled how the couple’s house felt the most like home to him outside of his own home.

“One thing that stood out to me was all the sand around the house,” remembers Guthrie. “I was told it was a common practice to keep pests out. I was also told that President Carter has been known to make unexpected visits to the farm… since he lives only seven miles away.”

Visitors also can stop at the Plains Depot, the oldest building in town, where a self-guided museum focuses on Carter’s campaigns for state senator, Georgia governor, and president.

While Carter’s modest 1960s ranch home is not open to the public, there is a viewing area that overlooks the property with plaques provided by the park service.

In 2018, the George H.W. Bush Presidential Library Center was in the news more than usual as both the 41st president and former first lady Barbara Bush were laid to rest on the center’s grounds, located on the Texas A&M University campus.

Once asked why the university was selected as the site for his presidential library, President Bush responded, “Because of the spirit of the place… the Aggie spirit.”  Indeed, the presidential center is an uplifting venue filled with the can-do spirit that the Bushes exemplified from the moment they decided to make the Lone Star State their home. The 1948 red Studebaker that Bush drove to Texas is on display with photos illustrating the family’s enthusiasm for their new adventure – a long way from their New England roots.

Filled with over 40 million papers, the library is more than a repository for documents. The interactive displays – many designed for youngsters – make it one of the most state-of-the art presidential museums. After my hand was scanned and an “access granted” appeared, my movements could be tracked throughout the museum (playfully, of course). The biggest thrill, however, was sitting in a replica of the oval office in the seat of power. When I opened the lower right desk drawer, I found the baseball mitt that the young Mr. Bush used when he was the Yale baseball team captain in 1948.

A large portion of the library is dedicated to Mrs. Bush and her work to promote literacy. Many of the children’s displays, including a doghouse for Millie, contain games and questionnaires to keep the little ones entertained while grown-ups can follow the interactive displays about policy decisions or experience the “situation room,” another replica of the real thing.

One of the most poignant artifacts is the 7-ton sculpture, titled “The Day the Wall Came Down,” featuring a piece of the Berlin Wall that was dismantled during Bush’s tenure as president. At Bush’s request, the names of the 15 people killed at the Berlin Wall were written on the Dove of Peace to represent over 900 people killed trying to escape to the West during the Communist regime. The horses on the monument represent the freedom of the human spirit.

“The untiring hope of the human spirit” is evident throughout the museum, just as the Bushes would have wanted.

The Truman Complex meanders through downtown Key West, not far from the Southernmost Point. Tucked in the corner of the bougainvillea-lined neighborhood is the clapboard home where President Harry S. Truman spent 175 days of his presidency from 1946 to 1952.

Originally constructed in 1890 as naval officers housing, the Little White House is Florida’s only presidential museum. Altogether six presidents used the home: William Howard Taft, Dwight Eisenhower, John Kennedy, Jimmy Carter, Bill Clinton and Truman. But it was the nation’s 33rd president who found the home most restful and who spent the most time there.

Tours are available every 20 minutes throughout the day from 9 a.m. to 4:30 p.m. No photography is allowed inside the home, which contains 90-to-95 percent of the furnishings originally purchased for Truman.

The home is usually open 365 days a year, but is still used for official business and events. Visitors should check the website to make sure the tours will be available on the days they want to visit.