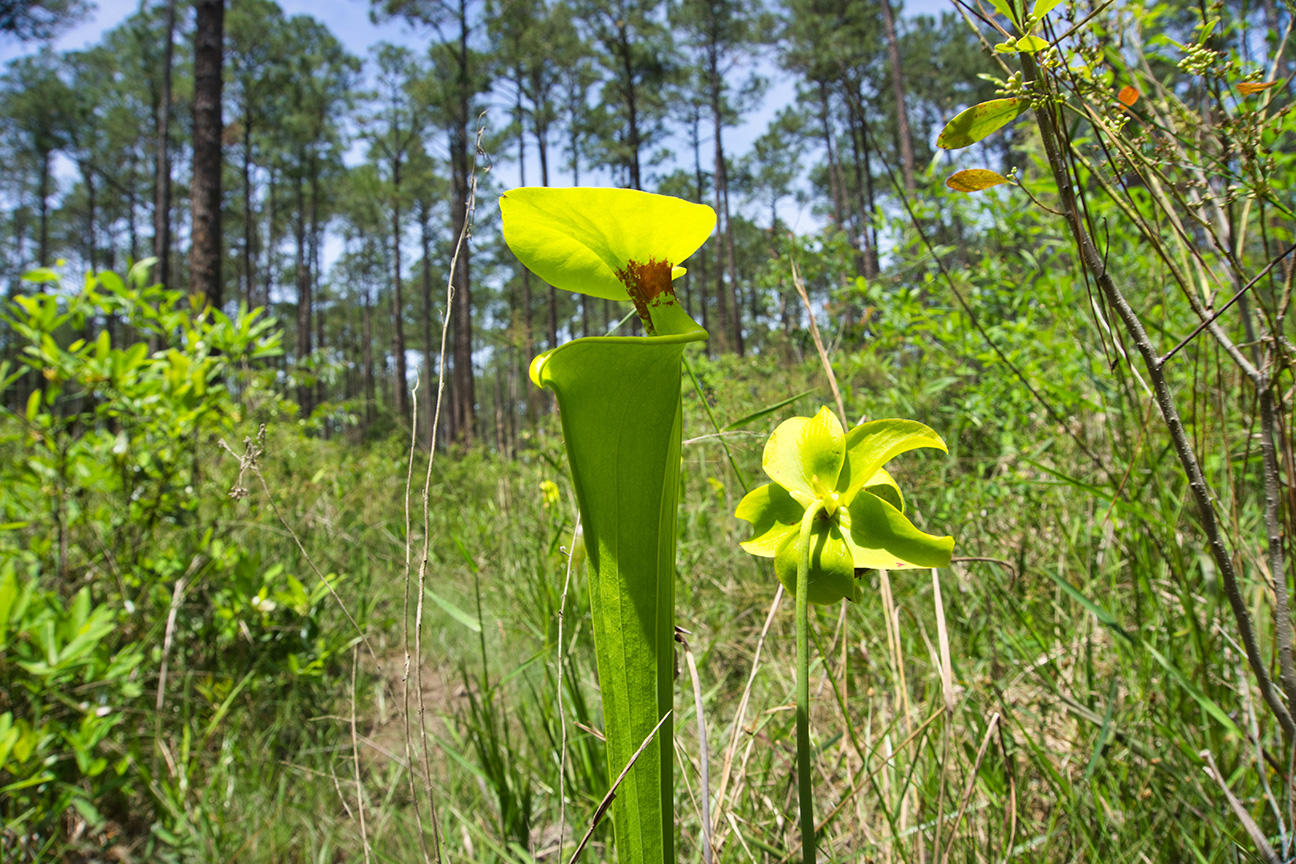 Walking the Pitcher Plant Trail Boardwalk through Abita Creek Flatwoods Preserve, we stop as Bill Rivers peels back a pitcher-shaped leaf to explain how pitcher plants trap their prey. I am only half listening, as my attention is caught by a fly. It strides back and forth atop the veined, translucent rim of a nearby pitcher plant before it peeks its head under the hood. A moment later, it disappears inside. I call the group’s attention to it.

It’s Rivers job to maintain this patch of longleaf pine flatwoods on behalf of The Nature Conservancy as their regional fire manager. Located just 4.5 miles east of the traffic circle in Abita Springs, La., the preserve is a prime example of a habitat that once blanketed the Southeast. Reduced by logging and development to only 2 percent of their original range, longleaf pine flatwoods are scarce. The savannas cradled within them are even scarcer.

Born in a Bog
Gulf Coast pitcher plants belong to the genus Sarracenia, firmly rooted in bogs, their leaves forming funnels that serve as traps. Where standing water soaks into pine needles, it creates the perfect acidic pH for pitcher plants to thrive. Add the necessary prescribed burns to remove dense underbrush, and these insect-eating plants thrive.

On the Gulf Coast, pitcher plants appear in sun-drenched pine savannas within a corridor largely south of U.S. 90. Big Thicket National Preserve north of Beaumont, Texas, anchors the western end of the pitcher plant belt. On the eastern end, while showy savannas are sprinkled throughout the Apalachicola National Forest near Tallahassee, scattered bogs continue east to Jacksonville. Sarracenia also stretches southward through Florida pine savannas almost to Lake Okeechobee, and northward in bogs along the Atlantic Coast into Canada.

Fueling Growth
Carnivorous plants along the Gulf Coast take different approaches to entrapment. Sundews create traps by exuding sticky blobs at the ends of their plant hairs. Butterworts have tacky leaves like tarpaper. Bladderworts have hair-trigger trap doors that vacuum up microscopic creatures, including mosquito larvae, into their tiny bladders.

Pitcher plants rely on the insect itself to enter its trap. Landing on the leafy pitcher is not enough. Nor is sitting on its mouth — I’ve been surprised by a tree frog peeking out of a pitcher plant at me. It’s the act of climbing into this slippery pit that seals the insect’s fate.

What attracts insects to pitcher plants? Color and scent. Emitting chemicals mimicking flowers and fruits, they draw flies and other flying insects. Once the insect crawls inside the plant to investigate, it can’t escape the slick surface with downward-pointing hairs. It slides into a pool of digestive fluid at the bottom of the pitcher.

Plants use photosynthesis to grow. So why do carnivorous plants “eat” insects? While interpreting the bog at Infinity Science Center on the Mississippi Gulf Coast, Master Gardener Michael Burke explains this to school groups regularly.

“The analogy I use with kids is gas in a car,” says Burke. “Most plants can find what they need in the environment for photosynthesis, to make ‘gas.’ Carnivorous plants live in a very nutrient poor soil and eat bugs for the nutrients that the bug contains. These nutrients are then used by the carnivorous plant to produce its own food, its own energy, through photosynthesis.”

Pitcher Plant Perspectives
When you walk into Infinity Science Center, the NASA Visitor Center for John C. Stennis Space Center, you see the Carnivorous Plants Conservatory before you reach the space artifacts. This gallery shows off insect-eating species from around the world, including the famous Venus flytrap, which is native to bogs within a tiny radius of Wilmington, N.C. The gallery is a natural extension of what lies between Infinity Science Center and Interstate 10 — a pine savanna with a pitcher plant bog at its heart. Along the Biome Boardwalk, interpretive panels point out the species within the bog.

Naturalist Mark LaSalle volunteers where pitcher plants grow in eastern Mississippi. “Grand Bay National Estuarine Research Reserve in Moss Point has a trail through a wet pine savanna and interpretation of this habitat inside…one of the only places to see all four species of coastal pitcher plants,” he says.

With salt breezes and the Gulf of Mexico’s waves strumming nearby, it’s surprising that pitcher plants grow in Gulf Shores, Ala. Yet on a 12-mile bike ride through Gulf State Park, my husband and I saw extraordinary habitat diversity and a bog garden at the nature center. In springtime, regularly scheduled walks lead visitors to a wild pitcher plant bog not located on an established trail. “This hike takes people to the one of the most diverse and vulnerable habitats within Gulf State Park,” says Assistant Naturalist Farren Dell.

“The original 900 acres was purchased in April 1998 due to the efforts of the ‘Friends of the Prairie’ group,” says Park Ranger Mickey Quigley. “The effort was initiated to preserve not only the white-topped pitcher plants but the many acres of wetlands that cleanse the water flowing into the bayou and bay.”

The move also preserved this beauty spot from a planned development. An accessible boardwalk and two longer trails provide views of four species of pitcher plants, which flower with rubbery red blooms each April.

“The novelty of the pitcher plant is what draws people the most to fill a soggy spot or a pot,” says horticulturalist John Parker, who works at The Garden Spot in Mandeville, La.

Pitcher plants also thrive in raised beds where you can control soil and dampness.

Bog plants require damp roots, poor nutrients, and full sun. A 50-50 soil mix of moss and sand is best and plants should be watered from below. Avoid mineralized water. The best water source is from rain collected in a rain barrel.

Buying native species helps acclimate them to your yard. It’s best to contact local nurseries to ask for plants grown along the Gulf Coast. Taking wild plants is a no-no, both ethically and for the sake of species survival. Most pitcher plant species are endangered or threatened by loss of habitat, and they do not transplant well.

As Master Gardener Michael Burke says, “The only time I could justify the removal of plant material by individuals from a natural environment would be if the land is about to be bulldozed for construction.”