They Still Want their MTV 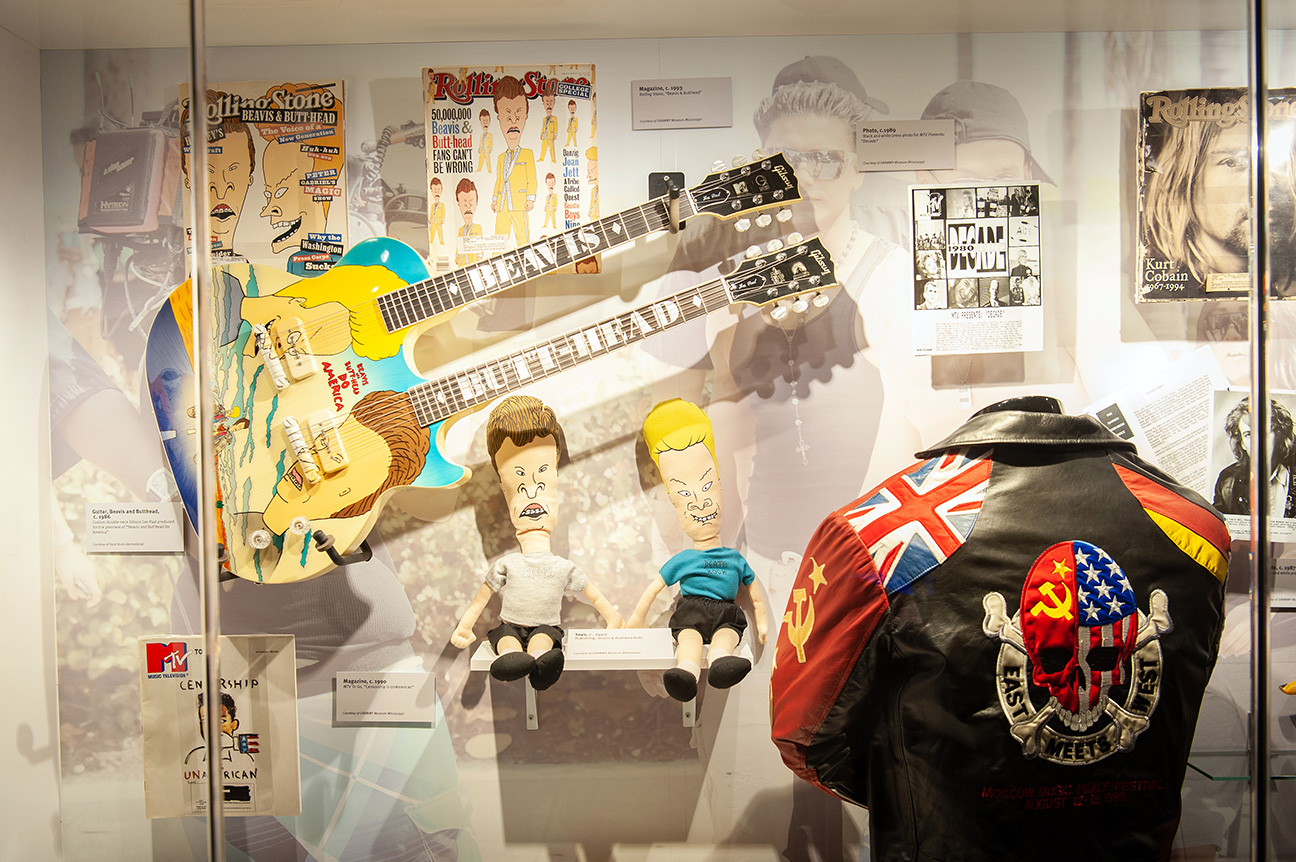 Nearly four decades after the Aug. 1, 1981, launch of MTV, the first cable television network devoted entirely to playing music videos, co-founder and Mississippi native Bob Pittman found himself back in his home state, surrounded by relics of the cultural revolution he helped ignite.

Pittman was on hand in May when the Grammy Museum Mississippi in Cleveland unveiled “MTV Turns Forty: I Still Want My MTV,” a comprehensive exhibition that tells the story of the Music Television network’s rise to prominence not only in music but also popular culture. Seeing the finished product, says museum executive director Emily Havens, wowed even the man who witnessed it all firsthand.

“Bob was certainly on board [and] he helped open some doors with the VJs and with MTV,” Havens says, but the finished exhibit exceeded his expectations. “I don’t think he realized what a big exhibit it was, and how comprehensive.”

“MTV Turns Forty” is the first exhibition fully conceived, researched, and produced by the staff and interns at the Grammy Museum Mississippi. The new exhibit, which will run through June 2022, was the brainchild of Lucy Janoush, a community educator and leader who served as president of the museum’s board of directors from its inception in 2011 under she passed away in 2017.

“She wrote notes to people to carry on without her,” explains Havens, “She really wanted us to do an exhibit honoring Bob Pittman. She wrote down an outline of what the exhibit might look like, and we were able to, a couple of years ago, decide that this was something we really wanted to pursue as a Mississippi team.”

Pittman and fellow co-founder John Sykes sat for interviews that became centerpieces of the exhibit. Once the team secured those assets, the acquisition process got easier.

“After we started curating that part of the exhibit, we were able to work on a lot of those individuals [who] had a wonderful collection of artifacts, from contracts to marketing pieces to T-shirts,” she says. “There’s the jacket that Alan Hunter wore on the launch, at his debut on MTV. And from there, we started looking at what artists we could reach out to, and we’ve gotten some great artifacts.”

The exhibit chronicles MTV’s beginnings, with the first set where “VJs” (video jockeys) like Alan Hunter, Mark Goodman, and Martha Quinn recorded their earliest on-air segments, and progresses through the network’s phases with sections like the dancefloor from Club MTV. Along the way, museumgoers can see iconic pieces of music history, such as outfits worn in videos and live performances for MTV by Sting, Madonna, and Michael Jackson.

“My favorite piece is a guitar Bret Michaels [of Poison] used on the ‘Every Rose Has Its Thorn’ video,” says Havens. “And there’s a beautiful guitar and outfit from the VMAs (Video Music Awards) that Jon Bon Jovi wore and performed in,” she says of the rocker’s memorable 1989 duet with guitarist Richie Sambora on “Wanted Dead or Alive.”

I Want My MTV!
Despite the heights MTV reached, especially during its first two decades — replacing radio as the dominant engine for breaking and promoting new music, popularizing reality television programming with “The Real World” and other franchises, and becoming a cultural tastemaker whose influence crossed into politics during the 1992 presidential election — from the outset, the network seemed destined to fail.

When the channel launched, it had fewer than 250 music videos in its library — not enough for a day’s worth of programming, even when combined with branded ads and news and banter segments featuring the VJs. Record companies, still deeply invested in the system of radio promotions, weren’t eager to divert cash to support an unproven business model with free content. Cable networks didn’t buy in, either, and without viewers, advertisers sat on the sidelines. Even in Manhattan no cable providers would carry the network, so the staff crossed the Hudson River to the New Jersey suburbs just to watch the channel makes its debut.

The network slowly gained support from advertisers and expanded its footprint with cable companies, but it wasn’t enough. Pittman doubled down with what he saw as their last chance by pushing an advertising campaign aimed at putting pressure on cable gatekeepers to carry the network. The phrase “I Want My MTV” may be remembered as the refrain to Dire Straits’ 1985 No. 1 hit “Money for Nothing,” but before that it was literally a call to action for music fans across the United States.

The gamble worked, and the MTV Video Music Award “moon man” statue Dire Straits received for the “Money for Nothing” video, which won Video of the Year, is part of the collection of artifacts on display at the Grammy Museum Mississippi. Nearby is a contract between Michael Jackson, the network’s first megastar, and the Screen Actors Guild concerning the cinematic 13-minute video for “Thriller,” which debuted in 1983. The highly successful promotional film broke down the racial barriers at MTV by being the first video by an African American artist to receive heavy rotation, as well as upping the stakes for the artform itself. After “Thriller,” thematic and arthouse-style videos became the norm.

On the opening night of May 14, the museum hosted an educational program featuring Pittman, Quinn, and Hunter for about 150 students in the Delta. Even the original VJs who couldn’t be there in person contributed to the oral history. Mark Goodman and Nina Blackwood opened their personal collections for the museum and also sat for video interviews that became part of the exhibit.

“[Quinn and Hunter] were excited to be in Mississippi, excited to see this exhibit; it brought back a lot of memories for them,” says Havens. “Alan Hunter still has quite a collection and most of his collection is in the museum. You could tell that they still really are connected.”

While most of the original MTV team has moved on to other careers, Pittman, who parlayed his years of working as a radio programmer to bring vision to the nascent cable music channel, has stayed in media, serving in executive roles at Clear Channel and AOL Time Warner. Pittman has now come full circle as CEO of iHeartRadio, back in the radio business where he began as a disc jockey in Brookhaven, Miss.

“Bob [being] from Mississippi certainly helped us, to be able to honor him and at the same time celebrate MTV’s 40th anniversary,” says Havens. “The exhibit has great interviews, it has great paper artifacts and contracts and marketing pieces, and it also has really beautiful outfits and instruments. It’s been really fun to watch it all come together.”