A Food-Lover’s
Guide
to Mississippi’s Festivals 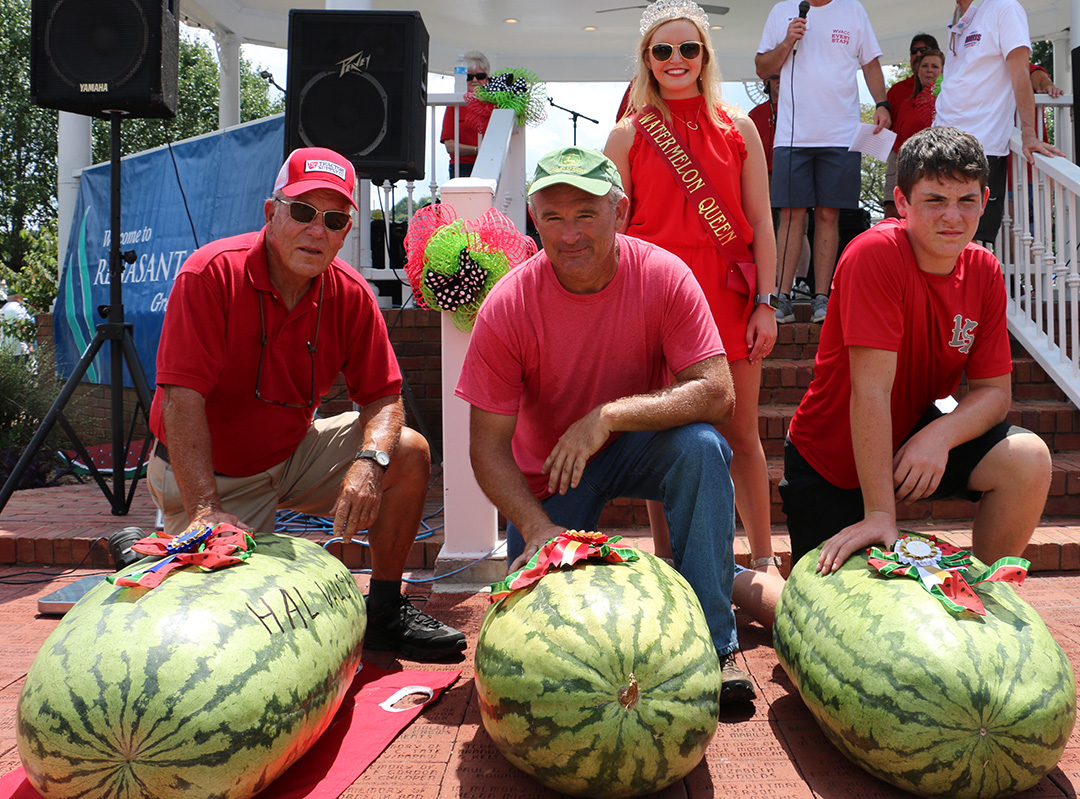 When Marilyn Anderson was growing up in Natchez, her family started the New Year with a colorful new calendar where her parents would mark special dates for the coming year, including family “food vacations.”

“What we did,” Anderson says, “was go to food festivals around Mississippi that we could drive to and drive back home in one day. We could spend a whole day at a food festival without spending a lot of money. Those were some of my favorite childhood memories.”

Today, Mississippi has a wealth of food festivals happening throughout the year. For a head start on what to do in 2020, here are some of the long-time food events that have become even more popular as the years have gone by.

World Catfish Festival, Belzoni
April 4, 2020
In the 1976 Bicentennial Celebration of America, Belzoni area leaders began looking for a way to salute the area’s important farm-raised catfish industry. As a result, the Catfish Festival was born April 1976 on the courthouse lawn.

“Over the years, the festival has evolved to encompass the whole downtown area of Belzoni, including all four streets for the arts and crafts show,” says Renee Hawkins, curator of Belzoni’s Catfish Museum and a member of the festival’s board of directors.

More than 10,000 people attend the festival each year – quite an attraction for the small Mississippi town with a population of about 2,000.

Named for the 19th-century Italian explorer Giovanni Belzoni, the town was proclaimed the Farm-Raised Catfish Capital of the World in 1976 by then Mississippi Gov. Cliff Finch, since it produced more farm-raised catfish than any other U.S. county.

To celebrate its heritage, Belzoni also has a Catfish Museum which features a video showing the complete story of the catfish from fingerling to frying pan.

“I think the festival is popular because it gives a sense of hometown pride,” Hawkins says. “Heritage is very important here.”

Watermelon Carnival
Water Valley, Aug. 6-8, 2020
Times were hard during the Great Depression. The tiny town of Water Valley decided the local community needed a morale booster, an inexpensive festival that could bring folks together. But what could they celebrate?

“What they had available was watermelon,” says Chamber of Commerce Manager Zandra Walker. “Plenty of them were grown right here.”

Delicious Water Valley watermelons were shipped north to Chicago, south to New Orleans, and east as far away as New York City, where they were reportedly listed on the menu of the world-famous Waldorf Astoria Hotel.

In 1931, Water Valley held its first Watermelon Carnival. At that time, the entire nation was in the grips of the Great Depression. “A Water Valley bank had failed, the railroad had pulled out, and unemployment was high,” Walker says.

But the small festival was so successful that the festivities were repeated for nine consecutive years.

“The Carnival was halted with the outbreak of World War II,” Walker says. “The Watermelon Carnival lay in dormancy until 1980.”

The carnival might have been gone forever but a local couple, Patsy and Joe Elliott Jr., decided the celebration shouldn’t fall by the wayside. After many sleepless nights, Joe Elliott presented his idea to local officials and was given the go-ahead to revive the 40-year dormant Watermelon Carnival in 1980.

“The Largest Watermelon Contest will avail year-round bragging rights to the lucky winner who has grown the heftiest melon,” White says. She added that a Water Valley man, Jerry Vaughn, holds the state record for growing the largest watermelon – a massive 239.5 pounds. The melon was 38 inches long with a girth of 5 feet, 3 inches.

Muscadine Jubilee, Pelahatchie
Sept. 12, 2020
Remember the comical scene in the old “I Love Lucy” television series where Lucille Ball tries to get a role in an Italian film called “Bitter Grapes?” To prepare for her audition, Lucy takes a vineyard job stomping grapes with her bare feet.

The classic 1956 episode ends, of course, with Lucy hilariously getting into a grape-tossing squabble in the huge vat with a fellow grape stomper.

Not surprisingly, one of the fun highlights of the annual Muscadine Jubilee is the famous Muscadine Stomp, says Pelahatchie Mayor Ryshonda Harper Beechem.

“We have local representatives, leaders in our county, and others that join in on the fun of stomping Muscadines,” Beechem says. “The awesome part is they have to stomp them with their bare feet.”

First held in 1980, the Muscadine Jubilee was begun to bring the town together to celebrate its grape heritage. “The Muscadines are served in many ways at the festival,” Beechem says. “One way is the delicious Muscadine jelly. People come from near and far to experience the taste of the Muscadine.”

Along with the activities and the grapes, Beechem says that the welcoming attitude of the townsfolks is a major reason for the festival’s success. “The Jubilee is so popular because of the friendly people, the culture, and the hometown feeling that Pelahatchie exemplifies.”

Seafood Festival, Biloxi
Sept. 12-13, 2020
Once known as “The Shrimping Capital of the World,” Biloxi has a strong seafood heritage and looks forward to sharing that in the annual Seafood Festival. Started by the Biloxi Chamber of Commerce in 1982, the Seafood Festival has become a yearly reunion for many people.

“Attendees greet each other with hugs,” says Rachael Seymour, director of the Biloxi Chamber of Commerce. “You will definitely see your friends and family at this event. Our out-of-town friends love it because it’s great food, wonderful entertainment, and talented artists. They return year after year.”

Volunteers also return, Seymour adds. “The volunteers that are involved in the planning of the event come back annually due to the camaraderie and fellowship felt through the experience. We couldn’t put this event on without the volunteers that contribute time and resources to it.”

A 200-foot shrimp po’boy built onsite is an eagerly awaited festival feature. Along with traditional fried fish and shrimp, plus boiled shrimp and crab, the Seafood Festival offers some very creative dishes – such as seafood-stuffed pineapple and shrimp boil on a stick.

“If you grew up here, you are likely related to many of the fishermen that contributed to our Gulf Fresh Mississippi Seafood industry,” Seymour says. “It holds a special place in many people’s hearts.”

“It’s a feel-good festival,” says Sylvia Clark, longtime festival committee member. “People who come to our festival each year are looking for a wholesome atmosphere, some good food and music, and a taste of our wonderful sweet potatoes.”

An excellent site for growing sweet potatoes, Clark says the Vardaman area “has the right soil type, the right climate, and the expertise of second, third, and fourth generation sweet potato farmers.”

About 85-to-90 percent of the sweet potatoes grown in Mississippi are grown within a 75-mile radius of Vardaman, Clark says. Vardaman raises the second-most acres in the U.S. behind North Carolina.

“We want the people who eat our sweet potatoes to see the connection between the soil, the farmer, the consumer, and nature,” says longtime grower Norman Clark of The Tater Shed in Vardaman. “We also want them to visit our festival and meet some farmers who are making a difference in this small Mississippi town one sweet potato at a time.”