Motorcycling
through the
South

By Gary McKechnie
Photography courtesy of Nancy Howell and visitnc.com 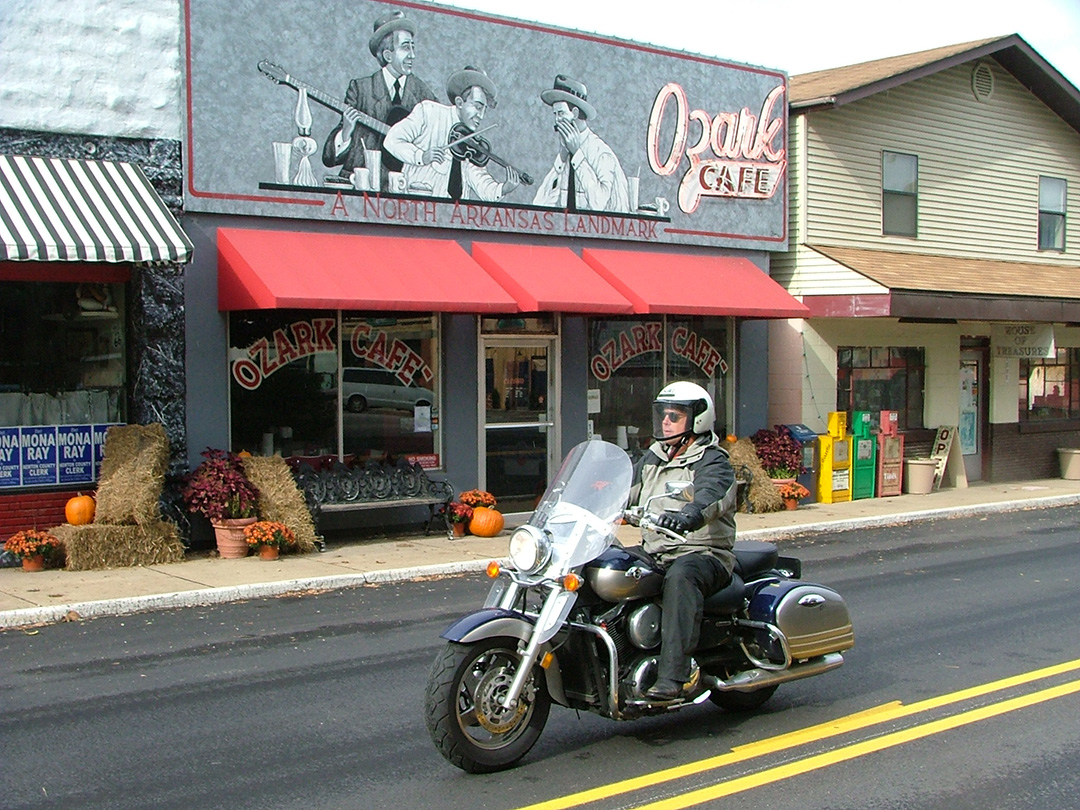 The author of Great American Motorcycle Tours takes us on a ride through his favorite Southern routes.

I flip up my helmet’s visor and flood my lungs with cool, clean mountain air. The engine of my motorcycle is pulsing like a power drill and every ounce of acceleration I need is there for the asking. At the crest of a hill, I twist the throttle, drop into a curve, and accelerate through a canopy of trees. The wind sweeps over my helmet and from the hills and rivers and lakes and forests the power of nature washes over me.

Ask any rider and they’ll tell you how a two-wheeled tour enhances your existence because a motorcycle doesn’t just get you there, it takes you back. Back to a time when you had the freedom to follow your passions…and follow the roads less traveled.

Road Scholar
While writing a travel guide of nationwide motorcycle tours, I’d connect three destinations — usually walking towns — that offered a nice blend of culture, history, and scenery. On research rides I took back roads that followed the curves of a river or rolled past endless fields of wildflowers or led to an overlook. A constant source of pleasure was finding Southern diners where, if a waitress asked me “What’ll you have, honey?”, I’d make a mental note to include that café in the book.

Whether you plan to travel on a motorcycle, a car, pickup truck, or your family mini-van, consider exploring a few of my favorite Southern tours that’ll give you an excuse to get off the laptop – and get on the blacktop.

Arkansas Mountain Run, 210 miles
Hot Springs to Eureka Springs
It was always a hot time in Hot Springs when this was a favorite getaway for gangsters and gamblers. While things have calmed down considerably, I was impressed half of downtown is a national park and I could still “take the waters” in century-old vintage bath houses.

Riding north, I escaped into the 1.8 million-acre Ouachita National Forest where the Scenic 7 Byway kicked things into gear with a few slow drops, casual S-curves, and steep climbs. From the crest of the hills, I could spy sunken valleys and a porous landscape sprinkled with mirror-like lakes. The traffic of Russellville eventually yielded to the countryside where a traffic sign told me I would soon drift into a rider’s dream: 63 miles of steep curves and sharp drops.

After rolling through the Piney Creeks Wildlife Area where narrow roads led higher to Moccasin Gap and the Hog Heaven Scenic Overlook, I split off Scenic 7 for 74 West where, just west of Ponca, there’s an amazing confluence of environments blending scenes from North Carolina, vistas from Vermont, the grasslands of central California, and traces of Wyoming prairie. In fact, the road seldom flagged all the way to Eureka Springs, an overachieving town of around 2,000 where there are dozens of bed and breakfasts, three historic hotels, a steam railroad, a Passion Play, Native American site, around 100 spas and massage studios, a preserve for orphaned and abused tigers and bears, and more than 7,000 weddings a year, some held at Thorncrown Chapel, named by members of the American Institute of Architecture as the fourth best building design of the 20th century.

Great roads and new discoveries. The essence of a perfect motorcycle run.

Mississippi Blues Cruise, 224 miles
Memphis to Vicksburg
The Mississippi Delta may lack the dramatic natural landscapes of the American West, but it more than compensates in its global influence. And that’s why I needed to see it.

I started in Memphis where, like other travelers, I visited Graceland, Sun Records, Stax, Beale Street, the National Civil Rights Museum, and assorted barbecue joints and watering holes. And when it was time to saddle up and head out, I was fueled by adrenaline knowing I’d be rolling south with the current of the Mississippi River. Although it was usually out of sight, it was never far from my mind.

Not long after leaving Memphis, the buildings disappeared and the farmland began. Aside from Tunica which flared up and faded away, I was lost in the emptiness of a region where the blues grew like cotton; its incredible story told at Clarksdale’s must-see Delta Blues Museum.

It was strangely calming to return to riding the Delta flatlands where the wind struck with force because there was nothing to stop it but me. Shelby was the next town of any size followed by Merigold, then Cleveland, and then Shaw where some cows varied the scenery slightly, but then the road drifted back to sleep.

On the final 80 miles into Vicksburg, I was already reflecting on the journey. While some might view the Delta as a desolate region, I felt it was actually a region of hope. Despite the lack of culture as outsiders define it, the people here developed a culture that, more than opera or ballet or Broadway, spoke to young people around the world who, in turn, channeled this music into a social and political force that changed the way we live.

And it all started right here. In towns like Panther Burn and Nitta Yuma and Hushpuckena.
Suddenly the Delta didn’t seem so empty anymore.

Blue Ridge Parkway Run, 200 miles
Mount Airy to Hendersonville, North Carolina
In 1935, President Franklin D. Roosevelt was working overtime to bring America out of the Great Depression. Among the items in his toolkit was the Civilian Conservation Corps which provided work to hundreds of thousands of young men who built parks, dams, bridges, and the Blue Ridge Parkway – a 469-mile toll-free dream that winds its way through the Appalachians.

Although Mount Airy isn’t the starting point of the BRP (that’s in Front Royal, Va.) it’s Andy Griffith’s hometown and so I would start there. The town delivered everything I wanted including a barbershop, a diner, and plenty of Mayberry memorabilia. When it was time to move on, I entered the Blue Ridge Parkway in Fancy Gap at Mile Marker 200 where the air was instantly perfumed by the grass and flowers of the surrounding mountains and valleys. As I rode past mile after mile of dogwoods, evergreens, meadows, and glades, I often saw cars and motorcycles had pulled over and travelers relaxing on the soft grass to enjoy picnics, naps, and nature. The road continued, smooth and flowing past gaps and overlooks like The Lump, Benge Gap, and Calloway Gap where I couldn’t resist stopping just to gaze at America.

After a night in Blowing Rock, I explored the town and toured the web of country roads that surrounded it. After discovering towns like Valle Crucis where I found the original Mast General Store, it was back to the Parkway where visions on the road ahead surpassed those of the day before. The Linn Cove Viaduct reminded me of the famed Bixby Creek Bridge on the Pacific Coast Highway, and a mix of gradual dives and immaculate ascensions thrilled me on a 50-mile stretch through the Pisgah National Forest before 30 additional miles kicked in with curves and angles Pythagoras couldn’t calculate. With granite columns on my left and valleys and mountains on my right, it was a rollercoaster ride that delivered the USDA recommended allowance of excitement.

At Interstate 26 I waved farewell to the Blue Ridge Parkway and headed into Hendersonville where a closer look at a map reminded me where I was: just three miles away from the Flat Rock Playhouse and Carl Sandburg home, 17 miles to Chimney Rock, 18 miles to the Pisgah National Forest, 19 miles to the fabulous Biltmore Estate, and less than 20 miles to Saluda, Tryon, Bat Cave, and Brevard.

Hendersonville was the hub and two-lane back roads radiated out like the spokes of a wheel… a motorcycle wheel.