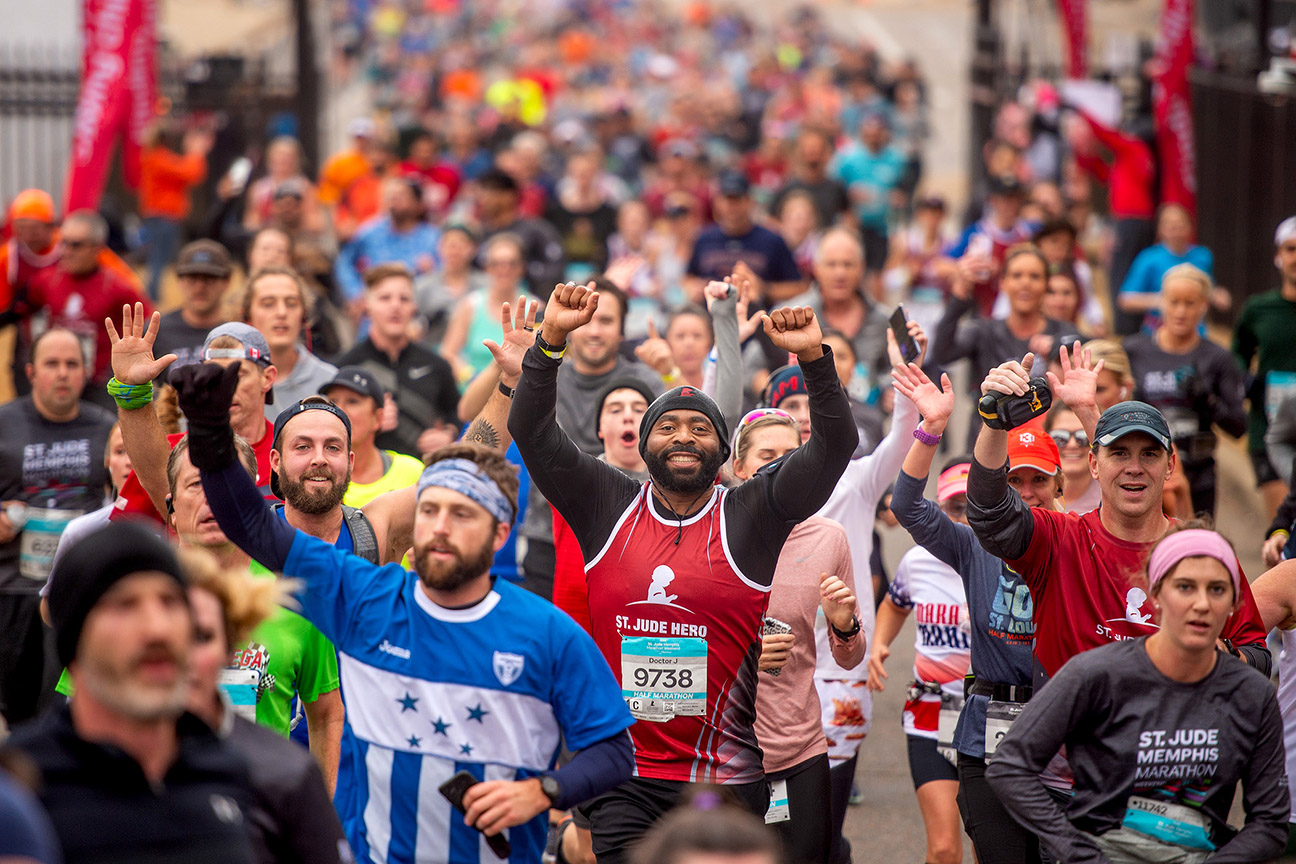 Memphis is building a reputation for world-class marathons so put on those running shoes and find a training program.

Memphis already is famous for blues, barbecue, Elvis Presley, civil rights history, and ducks that parade in an ornate hotel lobby – and it’s gaining stature as a place to run marathons, half-marathons, and other endurance contests.

An array of events throughout the year are open to anyone who pays a registration fee and trains appropriately. Some, such as the inaugural St. Jude Ironman 70.3 in October, are quite daunting and intended for serious endurance athletes, but most are more casual events that attract all types, from people who are truly competitive to others whose goal simply is to complete a race.

For the uninitiated, a marathon covers 26.2 miles, a half-marathon is 13.1 miles, and an ironman event combines swimming, bicycling, and running. For instance, the St. Jude Ironman 70.3 is a 1.2-mile lake swim, a 56-mile bike course, and a 13.1-mile half-marathon run. It almost hurts to consider.

No one precipitously declares he or she wants to be in an ironman event and competes immediately, just as no one makes a quick decision to run a marathon. The gateway drug for new runners is learning how to enjoy a 5K (3.1 miles) or a 10K (6.2 miles). You even can find “Couch to 5K” training programs.

With preparation, usually a 16-week regimen, tackling a half-marathon isn’t all that crazy. Running a full marathon, however, is a very big leap.

It is possible to become a runner with no assistance, but that’s no fun, especially when there are organizations such as the Memphis Runners Track Club (MRTC) to lean on and a gigantic party such as the St. Jude Memphis Marathon Weekend to anticipate the first weekend every December.

The MRTC has roughly 3,000 members, making it the fifth largest running club in the nation, according to Wain Rubenstein, race director for the St. Jude Marathon. The MRTC and its long list of races every year are one reason the Road Runners Club of America named Memphis the top runner-friendly city in America in 2018.

“We see people of all skill levels. Running is the most egalitarian sport in the world,” Rubenstein says. “I know I’ll never play in a golf tournament with Tiger Woods or Phil Mickelson or compete in a tennis tournament with Rafael Nadal or Roger Federer. However, I can lace up my shoes and participate in a race that features world-class runners.”

Wherever you live, Rubenstein recommends finding a running club to learn the basics (shoe selection, apparel, how to train) and then to run several shorter races to see whether you like the sport. Sporting goods stores that cater to runners are another resource.

The MRTC organizes the E.J. Goldsmith Road Race Series that starts in July and offers 10 races – two each of 5 kilometers, 5 miles, 10 kilometers, 10 miles and 13.1 miles.

“Many people use that series to prepare for the St. Jude Weekend, which has a 5K, 10K, a half-marathon and a marathon. In fact, the half-marathon that weekend is one of the fastest growing in the U.S.,” Rubenstein says.

The St. Jude half-marathon draws about 12,500 runners, and the marathon pulls in another 3,000. The weekend of activities raises about $12 million for the St. Jude Children’s Research Hospital, according to Rubenstein. It is the hospital’s biggest one-day fundraiser.

Several factors coalesce to make Memphis appealing to runners and spectators, both locals and visitors. Variety is one consideration. There are street races if you want to run on pavement, trail events if you want a different feeling under your feet, and there is a great choice of dates and scenery.

For instance, the Herb Parsons Trail Marathon is east of the city in Collierville in January, the Shelby Forest Loop Marathon is in February in Millington, and the Big Buffalo 50 (an endurance event with a 50-miler, a 50K and a 50K relay) is at Shelby Farms Park in March.

Springtime means you can get a barbecue high at the Memphis Big BBQ Half-Marathon in April or go international at the Great American River Run (part of the course is along the Mississippi River) during the Memphis in May International Festival.

There’s even a two-state event in November, the Big River Crossing Half-Marathon that uses the longest pedestrian bridge over the Mississippi River to take runners from Tom Lee Park on the Memphis side across to Arkansas and back.

Local runner Kevin Raney noted that visiting runners benefit from the lay of the land in Memphis. The city isn’t exactly flat as a pancake, but it’s kind to runners for the most part. “Our hills are merely bumps in the road compared to other parts of the country,” he says.

Raney, 53, and a runner since high school, still wants to get better. “I hired a coach four years ago to train for exactly what I want to do (50K races),” he says. “If you prepare, (any) race is a great experience, not the worst experience of your life.”

J.J. Greer, sales manager at the Memphis Sports Council, the sports marketing arm of Memphis Tourism, wants runners to have great experiences during races, noting that races are great vehicles for the city to promote itself. Greer helped recruit the St. Jude Ironman 70.3, which he expects to draw 2,500 participants, plus families and spectators.

“Races, particularly the ones downtown, clearly show people what a fun and beautiful city Memphis is,” Greer says. “Lots of runners discover places we locals sometimes take for granted, such as Beale Street, the Rock ’n’ Soul Museum, the National Civil Rights Museum, and some of our neighborhoods. Visiting runners enjoy our attractions and are inspired to return. Memphis becomes a race winner itself then.”

Even if you’d never dream of running a distance race yourself, there are ways to participate. The simplest way is to be a spectator and to cheer the runners on. Homemade posters are a special treat: “Go Mom!” “You can do it, Fred!” “My training was to make this sign.” “Worst parade ever.”

Another way to participate without running is to volunteer. Every race requires volunteers to help with registration, to staff water stations along the racecourse, distribute pints of chocolate milk (an acknowledged restorative) at the finish line, and many other tasks.

Rubenstein of the St. Jude Memphis Marathon Weekend said that event puts 3,500 volunteers to work – both to have fun and to support a good cause. One group, he noted, travels every year from Kansas City. That’s how much they like marathons and Memphis.