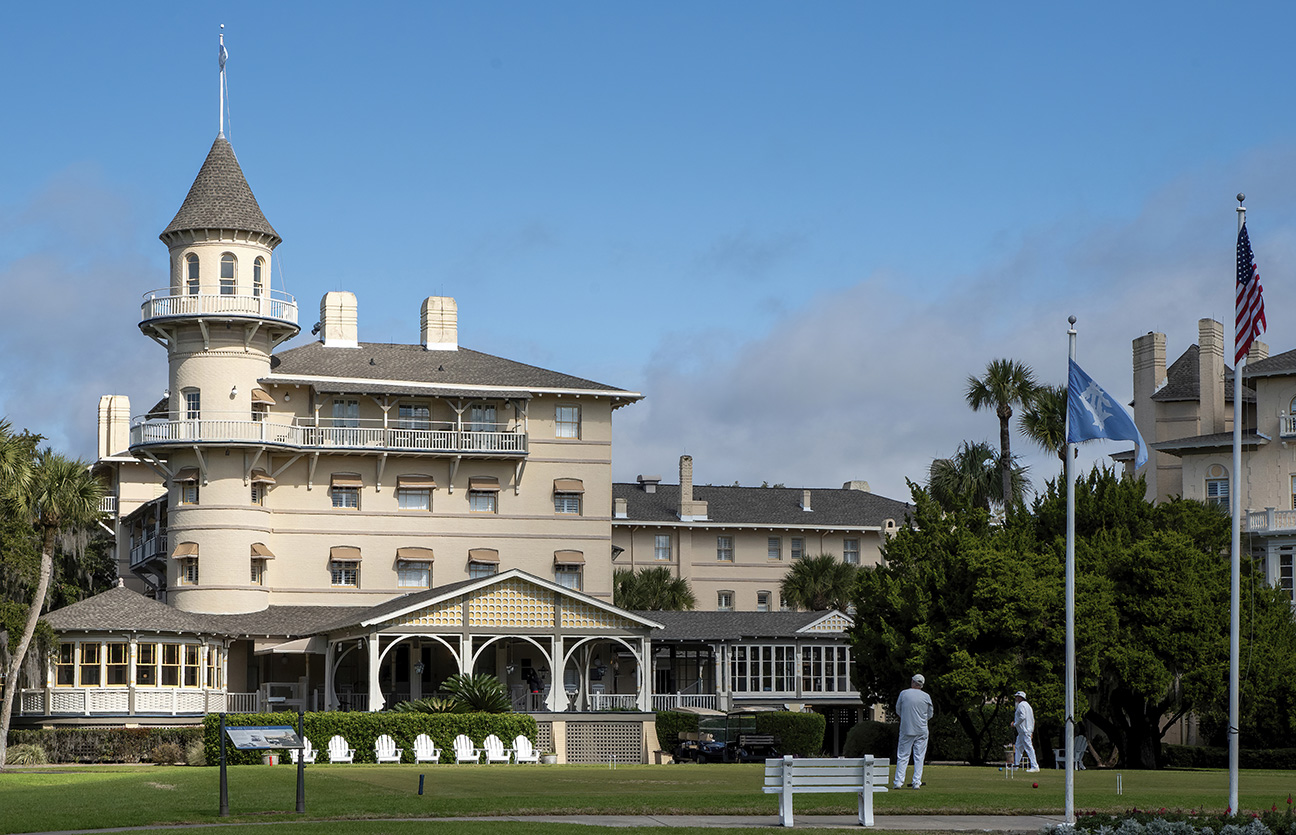 From its iconic Driftwood Beach to the historic millionaire’s club, Jekyll Island, Georgia, provides an ideal destination for social distancing and family fun.

The saltwater marshes surrounding the 9-mile causeway to Jekyll Island are the first clue to the serenity and isolated beauty of this Golden Isle off the coast of southern Georgia. It’s this tranquil setting that led to the founding of the exclusive Jekyll Island Club, a place filled with history and grandeur that attracted this country’s wealthiest business titans during America’s Gilded Age.

​ When it opened in April 1888, the Jekyll Island Club served as a private winter getaway for families with surnames of Rockefeller, Vanderbilt, Morgan, and Pulitzer, to name a few. Several of their vacation homes — called “cottages” — still dot the 240-acre historic property which is now the Jekyll Island Club Resort and open to the public.

​“Jekyll Island was appreciated for its rustic charm,” says Andrea Marroquin, curator of the island’s Mosaic Museum. “The original club members were looking for less high society and more of an outdoor retreat.”

The area’s natural environment attracted millionaires who wanted to establish a hunting club and escape harsh northern winters. The island’s owner — John du Bignon — hoped to sell the island, and he turned out to be a marketing genius. He stocked the island with pheasant and advertised its natural beauty to people he suspected would be willing buyers: his brother-in-law’s fellow club members at the prominent Union Club in New York City.

​“The isolation was exactly what they were looking for then, and it’s what people are looking for now,” says Marroquin. “Throughout the history of the island, the natural beauty and resources are what have attracted people here.”

​ Those same reasons have kept Ronnie and Pam Williams of Olive Branch, Miss., returning regularly to the island since 1995.

​“A friend from Jacksonville took us to Jekyll the first time, and we arrived at night,” remembers Williams. “When the sun came up the next morning, it was beautiful and quiet. There was no noise at all. I had been working a stressful job and I needed that peace and quiet.”

​In this time of social distancing and virus concerns, an island with plenty of natural resources and outdoor amenities can be a perfect destination. With its Historic Hotels of America designation, the Jekyll Island Club Resort is a modern-day paradise along with its sister property, the Jekyll Ocean Club, on the beachside of the island.

ISLAND ADVENTURES​
A visit to Jekyll Island should begin at the Mosaic Museum, which was reimagined and reopened in April 2019 with new interactive exhibits that appeal to all ages. Housed in a former stable, the museum explores the island’s history from the time of its indigenous peoples through the 20th century.

​“The name Mosaic reflects that there are a lot of pieces to the story of the island. It’s the people, the places, and the legacy of all that,” explains Marroquin.

​ A tram tour leaves the museum and glides through the Jekyll Island National Historic Landmark District for over an hour. The well-versed guides share anecdotes about the island’s former residents, and the tour is well worth the $20 fee. The tram usually stops at the 12,500-square-foot cottage of William and Myra Rockefeller, who enjoyed Jekyll Island with their children and grandchildren. Other historic homes are available for separate tours.

​Youngsters will especially enjoy visiting the Georgia Sea Turtle Center, housed in the club’s former power plant building. The center cares for and rehabilitates injured sea turtles but also features an outstanding display of exhibits and special events. An after-hours treat is the private Turtles at Twilight tour, but reservations are required.

​Bicycle trails meander throughout the 10-mile-long island so it’s easy to explore the entire island. A can’t miss stop is the famous Driftwood Beach on the island’s northeast side, where photographers line up at sunrise to capture the eerie scenes of a once-thriving maritime forest. Nature lovers also enjoy miles of wooded walking trails. And, of course, the pristine beaches on the island’s southeast side are especially popular in the summer.

​ “We’ve been to Jekyll 13 or 14 times, and we always find things to do that we’ve never done before,” says Williams, who particularly enjoys the island’s golf courses.

FROM EXCLUSIVE CLUB TO STATE PARK
Entire books have been written about the private club for well-heeled millionaires because the history is indeed fascinating. In 1910, the nation’s financial leaders met secretly at the Jekyll Island Club to draft legislation for the Federal Reserve System. Five years later, the first transcontinental telephone call was initiated from there.

Today’s visitors are awed by the incredible historic preservation of the elegant homes that were abandoned when the original Jekyll Island Club ceased operation in 1942 — primarily because of financial woes from the Great Depression and then World War II.

​ The State of Georgia purchased the island and opened it as a state park in March 1948. By the end of April of that year, more than 6,000 visitors a week made the day trip from Brunswick for $1.50. Jekyll Island became even more popular with time. As a state park, however, development was limited to protect the natural environment — still a top priority for the Jekyll Island Authority that oversees the island.

​ Although the state operated the club as a public resort, it was not financially successful and closed again in the 1970s. Developers restored and reopened it as a luxury hotel in 1987.

​ Today’s guests at the Jekyll Island Club Resort can expect the quintessential service that the club’s original founders received and can participate in the same kinds of recreational activities — except for hunting which was prohibited long ago in favor of golf and croquet. For those who prefer to relax, the grand porches are perfect for sitting quietly with a good book or to enjoy the scenery.

KNOW BEFORE YOU GO

Parking Pass – Because the entire island is a state park, visitors need to purchase a parking permit before entering the island. A drive-through, automated toll plaza at the island’s entrance sells the passes for $8 a day. They can also be purchased online prior to arrival. The plaza is equipped with cameras to read your car tag so you don’t have to stop if you purchase passes online. www.jekyllisland.com/visiting/parking/

COVID Restrictions/Events – Currently, many businesses have restrictions in place and special events have been cancelled or postponed because of the pandemic. Like other destinations, Jekyll Island hopes things will return to normal later this year. In the meantime, check websites to learn what is open and available.

Dinner Reservations – All of the restaurants have social distancing measures and/or limited hours; therefore, reservations are imperative. Currently, the Grand Dining Room at the Jekyll Island Club Resort is open only to guests and reservations are required.  The Pantry at the resort offers custom picnic baskets for guests who would like to enjoy their meals outdoors or at the beach.

Beach Time – While Jekyll Island’s Historic Village may be the most iconic part of the island, a beach village attracts visitors who prefer surf and sand. Hotels, shops and restaurants are located on Beachview Drive near the Jekyll Island Convention Center.