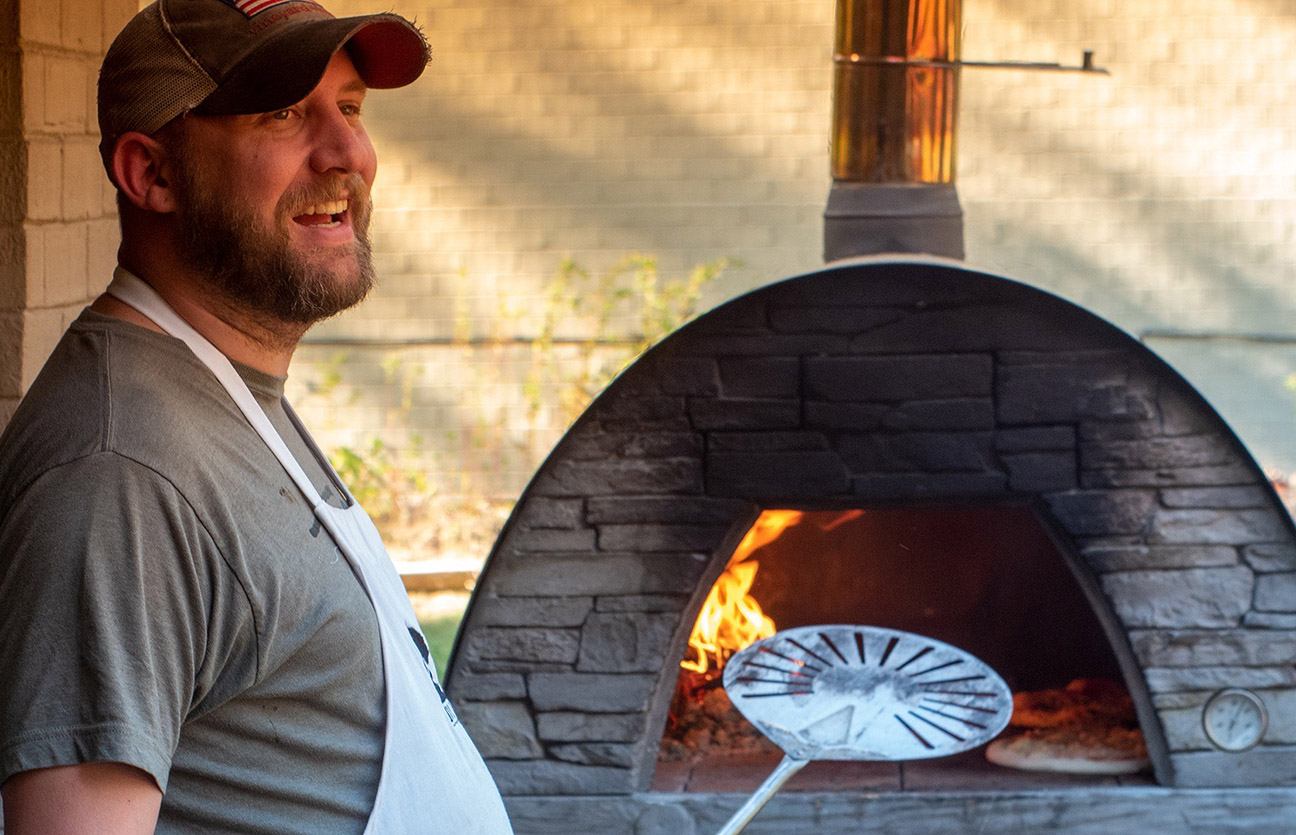 With a childhood nickname like “Moondog,” Joey Thompson says the popularity of his business “was written in the stars.”

His reference, however, is not to some astrological enterprise, but to something that most people seem to enjoy — eating. Thompson is owner and chef for Moondog Makers & Bakers. Founded in 2015 in Corinth, Mississippi, Moondog Makers & Bakers caters delicious food to events and private residences or visits sites where Thompson does the cooking and serving.

That might sound surprising to people who knew Thompson as a kid.

“I never cooked. Ever,” he says. “The most I ever cooked was to put a Pop-Tart in the microwave and put a slab of butter on it.”

What got Thompson started on his path to becoming a chef was moving to Corinth and applying for a job at the newly opened Pizza Grocery restaurant in 2006.

“They asked if I had cooking experience and I said ‘yes,’ which wasn’t entirely true,” he says. “That’s how it all began.”

His past “cooking experience” was working at a gas station from the time he was 14 years old to age 21. When the gas business was slow, Thompson would help in the deli, mostly cutting meat and making sandwiches with an occasional turn working the fryer.

“That was it,” he says. “I would happily eat fried chicken, shrimp, and French fries back then, but I wouldn’t have eaten an olive or a mushroom if you paid me. Nothing different to eat for me.”

What turned his taste buds around, Thompson says, was working at Pizza Grocery with Chef Andy Lipford.

“I remember being amazed at seeing him thumb through a cookbook and make something really great off the top of his head,” Thompson says. “I kind of shadowed him and applied what he was doing and married it to my own process.”

After work at Pizza Grocery, Thompson furthered his culinary journey by “jarring and jamming and canning things” at home.

“I didn’t do it to make money,” he says. “I just wanted to have fun at home and do something cool and creative.”

One of his most popular early creations was “Moondust,” a 17-spice blend meat rub that is flavor enhancing, but light on unnecessary and inexpensive fillers like salt and sugar.

“It’s true spices and pretty much one of my staples,” Thompson says. “I think that every other house in the county now has it in their pantry.”

As for that “Moondog” name, Thompson says his uncles pegged him with the moniker because the kid was so gung-ho about professional wrestling.

“I used to try to wrestle with my uncles,” he says. “Now it’s just what people call me — Moondog.”

For his cooking, Thompson describes it as a mix between Southern and fine Italian with an emphasis on fresh local ingredients. A baker’s dozen of 13 chickens running around the family yard provide the eggs and a farmers’ market down the road offers inspiration as well as fresh-grown fruit and veggies for his dishes.

One of the family chickens named Betty was adopted during a major ice storm over Valentine’s Day.

“We were iced over for seven days which is very unusual here,” Thompson says. “A neighbor a mile down texted me if I was missing a chicken. I wasn’t but she said her hens weren’t getting along with the visiting chicken and asked if I wanted to foster the chicken until we could find her owner.”

Poor Betty suffered frostbite on her feet as a chick while she was homeless. She lost the toes on one foot and the claws on the other, plus no one ever claimed her.

“She hobbles around just fine,” Thompson says. “We open the coop in the morning and she kind of flies out. My wife holds her and feeds her meal worms. She’s part of the family.”

Joey’s wife, Kaylin, is a nurse at the local Magnolia Regional Health Care Center. The couple has three children: 9-year-old Gordon, 5-year-old Elliott, and 3-year-old Adalyn. Moondog Makers & Bakers has become so successful that Thompson left Pizza Grocery in June 2019 to devote his culinary talents to his fulltime business. In addition, Moondog Makers & Bakers has catered many weddings, family reunions, business gatherings, fundraisers, and other events.

“The biggest group I’ve cooked for is probably 250 to 300 people,” Thompson says, adding that “dinner-for-two” has been particularly requested during the pandemic as a night out without leaving the house. “I do a four-course meal for that.”

A mobile wood-fired pizza oven recently added to the business has made pizza a much-loved menu item.

“Fire up that oven and the crust on the pizza is fantastic,” he says. “That is not me tooting my own horn. It is the pizza talking for itself.”

In the future, perhaps, Thompson says he might write his own cookbook interspersed with interesting food tales. He also hopes someday to open a brick-and-mortar restaurant.

“What we are doing now is really working for us,” he says. “But someday, my own restaurant would be great.”