Driving Through the
Lights 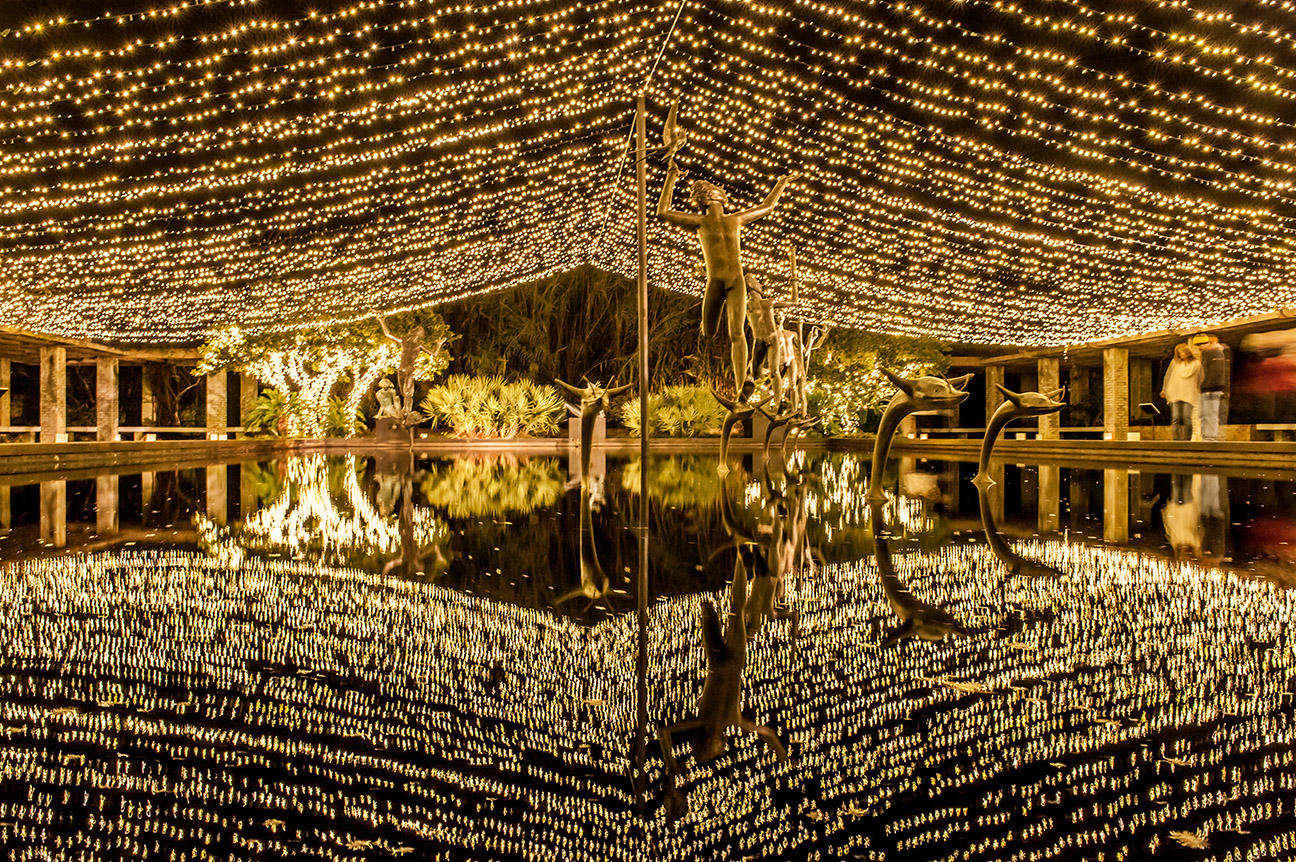 Millions of lights are hung and ready to help brighten our spirits this holiday season, and we don’t even have to get out of the car to enjoy them.

Nobody will dispute that 2020 has been a stinker of a year and that no benefit comes from enumerating the reasons. That’s why we need a boost.

“Now more than ever, people are looking for something normal. They want experiences that are heartwarming, enjoyable, touching, and traditional. They want things that are familiar. Dazzling holiday light displays deliver those feelings,” says Sonny Horton, general manager of Callaway Gardens in Georgia, which happens to have a rather amazing festival of lights.

All around the Deep South, you can see a glow in the evening sky, and when you reach the sources, you find people enjoying that heartwarming, touching, and traditional experience Horton described — family time amid millions of colorful lights.

Here’s a look at five events where participants may drive through to enjoy, allowing for social distancing. They range from big cities to a tiny town whose light festival attracts many multiples of the town’s population. Get ready to ooh and ahh and to shout, “There’s Santa!”

The holidays aren’t complete in Memphis without the twinkling experience of Starry Nights at Shelby Farms Park, one of America’s largest urban parks. Shelby Farms is huge — 4,500 acres — but the holiday focus is on two miles of colorful and diverse lighting displays you experience from the warmth of your vehicle.

“It’s an entirely drive-through experience this year because of pandemic considerations,” says park communication specialist Rebecca Dailey, explaining the absence of Mistletoe Village. “We have immensely increased the amount of lights and displays, and we’re packing as much as we can into a two-mile drive — and it’s all in LED lights.”

Barely 25 miles away from Starry Nights in Memphis, but across the Mississippi state line, is another excuse for a family outing — the 20th celebration of Southern Lights in Southaven’s 116-acre Central Park.

There’s a “good deed” twist to Southern Lights because every night benefits a different charity, according to Kim Terrell, director of tourism at Visit DeSoto County. Depending on which night you visit, visitors will support big-name causes such as Make a Wish, the American Cancer Society, and the Humane Society or more local organizations such as the Fellowship of Christian Athletes, high school clubs, and DeSoto Grace, a nonprofit that builds relationships between people.

An archway with two towering toy soldiers marks the entrance to the 500,000 lights of Southern Lights. Tune to any of five FM radio stations broadcasting music appropriate for your drive. Showing the down-home spirit of Southern Lights is the declaration that you are welcome to arrive via car, van, bus, motorcycle, or hay wagon. Southern Lights runs through Dec. 30 except for Christmas night.\

Tylertown is a tiny spot on the map closer to New Orleans than to Jackson, where a tight-knit cadre of volunteers pitches in every year to stage a holiday event of major proportions. In a community of 1,500 people, more than 30,000 people attend Christmas in the Park.

“There are a zillion lights,” said volunteer Tammy Tolar with a wink and a smile during an interview about Christmas in the Park. Nobody will try to curb her enthusiasm after viewing the 12 Days of Christmas, a manger scene, ice skaters, carolers, Christmas trains, a gingerbread house, and Santa’s elves — and that’s just some of the holiday-themed displays. Add to that Noah’s Ark (complete with several pairs of animals, including two elephants), the Iwo Jima Memorial, and Toyland.

Christmas in the Park, which takes over the 40-acre Holmes Water Park east of downtown, had simple beginnings in 1998 and has grown into an event known throughout Mississippi. Area residents donate many of the displays, and festival setup begins every September. However, volunteer organizers work practically year-round finding ways to add to the zillion lights total.

Christmas in the Park runs until Dec. 31.

In a city known for throwing big parties, visitors should expect nothing less from the 34th annual Celebration in the Oaks at New Orleans City Park — even in a pandemic year.

Celebration in the Oaks normally is a multi-faceted collection of events in several locations throughout the 1,300-acre park (including the Jingle Bells and Beer party for the older set), but crowd-producing attractions aren’t in the cards for 2020’s drive-through festivities.

“We’ve basically put everything we have on the driving tour,” said Julie LaCour, who has overseen the event since 2006, explaining her desire for a big “wow factor.” She says it’s practically a year-round endeavor to design, build, install, and dismantle the light displays, which are packed along a 2.25-mile route this year.

There are six new displays of major proportions, including a 24-foot-long whale, a 15-foot-tall waving Santa (tucked away since Hurricane Katrina), and a special salute to the city’s medical community that features caduceus symbols and hearts. LaCour promises an individual surprise for every vehicle, which is why visitors are asked for passengers’ names when purchasing timed tickets.

While Celebration in the Oaks is important as a spirit-lifting holiday experience, it’s also vital to park operation. It produces about 15 percent of the budget for a park that includes the world’s largest stand of mature live oaks, a botanical garden, a sculpture garden, and an amusement park. The event runs until Jan. 3, 2021, except for Dec. 24 and Dec. 31.

Callaway Gardens, the destination resort 85 miles southwest of Atlanta, originally was famous for glorious spring and summer floral displays of azaleas, hydrangeas, and magnolias, but plenty of people know it now for the blazing colors of Fantasy in Lights, a holiday festival highlighted by a driving tour through the Georgia hills.

Fantasy in Lights is substantial enough that you can drive your own vehicle or hop aboard a Jolly Trolley to see 15 elaborate scenes and more than 8 million lights.

The event includes a 10-story-tall Christmas tree, which the resort labels the tallest in the South, located at one end of a new display called the Magical Field of Lights, almost 600 feet long. That’s two football fields worth of sparkle. Lights are imbedded in the ground and illuminate in undulating patterns set to musical selections such as the “Hallelujah Chorus” and the “Carol of the Bells.”

Beyond the nighttime driving extravaganza, a Fantasy in Lights ticket also includes Christmas Village for shopping, dining, and a visit with Santa, plus admission to Callaway Gardens for strolls or bike rides on a 10-mile trail system through the resort’s 2,500 acres.