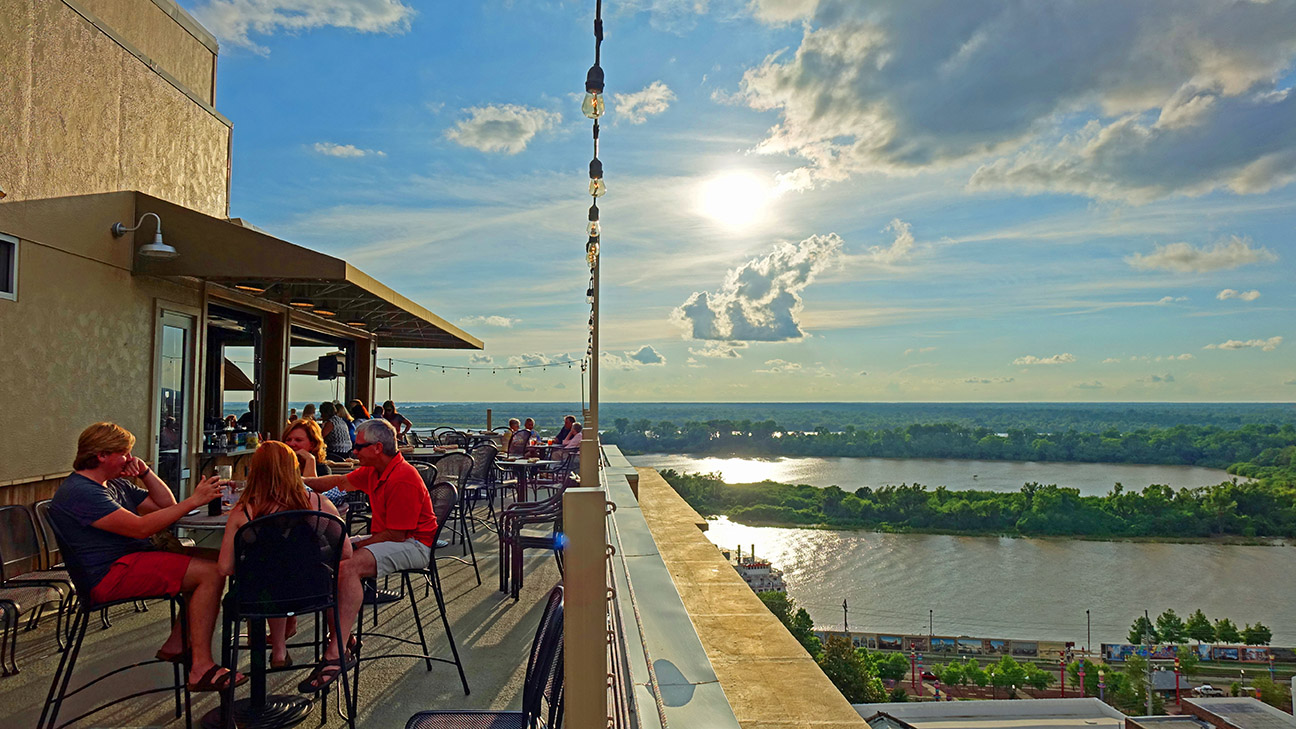 A trip to Vicksburg is a trip back in time with its Civil War military park, historic bed-and- breakfast inns, and downtown heritage trails.

Vicksburg rests high on bluffs overlooking the Yazoo and Mississippi Rivers, an eagle’s perch overlooking the flatlands of Louisiana that stretch to the west. Its location was the perfect site for a city surrounded by prosperous cotton fields, where the crop’s fortunes poured into Vicksburg as the product moved downriver to New Orleans and into the world.

“Vicksburg was a cosmopolitan place,” says Andrew Miller, park ranger at Vicksburg National Military Park, site of the Civil War battle that occurred there in 1863.

The city’s wealth is one reason Vicksburg voted against secession from the United States just before the Civil War, Miller explains. And yet, the town would find itself in the middle of a decisive battle, one whose outcome removed Vicksburg’s position as one of the richest towns in America.

In spring of 1863, Union forces had taken over New Orleans and many sites along the Mississippi River, but Confederates held Vicksburg in Mississippi and Port Hudson in Louisiana. U.S. Gen. Ulysses S. Grant knew the key to dividing the South was control of the Mississippi.

“It’s basically the lifeline of the United States — both north and south,” Miller says.

Grant surrounded Vicksburg and performed an assault on the Confederate forces — and the town with residual warfare — from March 29 to July 4, 1863, when Vicksburg finally surrendered. Port Hudson soon followed suit and the river fell to Union hands.

Today, both the town and massive military park offer visitors a trip back in time, the town with its ancient homes and buildings arranged in convenient heritage walking trails and the park with its vistas, ravines, and memorials, established in 1899 to commemorate the battle and its veterans as well as for “peaceful reflection,” Miller says.

Walking Through Downtown
The Vicksburg Heritage Walking Trails are a great way to see the historic city. Five routes ranging from 1.5-to-3 miles run throughout the downtown area with the Captain Speeds Route extending southward to Vicksburg’s first neighborhood. Maps are available from the Vicksburg Convention & Visitors Bureau.

Spots along these trails include the Old Court House Museum with its historic displays, the Biedenharn Coca-Cola Museum showcasing how the iconic soft drink was first bottled in Vicksburg, the Old Depot Museum that contains a diorama of the battlefield, and the Catfish Row Art Park, containing regional art pieces and a play area for children, plus the 32-panel Vicksburg Riverfront Murals.

The Jesse Brent Lower Mississippi River Museum features a full-size river tugboat and displays of life along the river, including how the Mississippi River changed course in the late 19th century, abandoning the town, and how the Yazoo River Diversion Canal was built to accommodate this loss.

Vicksburg is also home to numerous historic churches and homes. Christ Episcopal Church adorned with Tiffany windows, for example, dates back to 1839 but still conducts weekly services. One of the oldest homes in Vicksburg, the McNutt House, once belonged to Mississippi Gov. Alexander McNutt.

Thousands visit the Vicksburg National Military Park each year for the Civil War history, to offer their respect to the fallen — including the largest number of African American troops in a national cemetery — and to understand the power of reconciliation. One of the main goals of the park’s establishment was to offer a place for Civil War veterans to come together in remembrance and peace, Miller says, including being the site of the Great Peace Jubilee of 1917. When visitors enter the park, they are greeted by a memorial to that event.

Miller enthusiastically shares military history of the park, but those tales include civilian experiences, odd tales of animals in battle, and the diverse backgrounds of all involved. He also encourages visitors to explore the park for its natural elements.

“It really is an amazing place,” Miller says. “There are so many stories to explore.”​

Sleeping with Ghosts
Duff Green arrived to Vicksburg in 1847 hoping to make his fortune as a broker in cotton. He couldn’t have picked a better time, no pun intended. The railroad was coming through, the river provided access, and the cotton gin changed how cotton was processed.

“Duff Green came to Vicksburg at a very profitable time,” says Tracey Glomstad, a tour guide at Duff Green Mansion. “He made a tremendous amount of money.”

Green married a judge’s daughter, who gave the couple an entire city block as a wedding gift. Green used most of the land to build a palatial mansion with three floors, including a dramatic staircase where visitors would make a grand entrance to his balls.

Visitors may stay at Green’s house and enjoy an equally impressive breakfast. History abounds throughout the bed and breakfast, including a cannonball still lodged in the ceiling in one bedroom. Confederate president Jefferson Davis visited the Greens and the bottom floor was once used a hospital during the 1863 Siege.

Some visitors claim a Confederate soldier roams the hallways and others have spotted Annie, the Greens daughter who died young.

“She’s thought to be the spirit that lingers on the stairs,” owner Harley Caldwell says of Annie.

The 1830 Anchuca Historic Mansion and Inn, one block west, offers history and a few ghosts for those who spend the night, while serving up meals to all in its garden room restaurant. The home was once owned by Davis’s brother, Joseph Emory Davis, and when Jefferson Davis was released from prison following the Civil War, he gave his last public speech from Anchuca’s balcony.

History Aside
It’s not all history in Vicksburg. Visitors may also enjoy the casinos, shopping, day spas, and dining options that range from breweries to Delta tamales. Whatever your pleasure, end the day at 10 South Rooftop Bar & Grill and enjoy a signature cocktail, tangy pretzels with a honey-mustard sauce, and one of the best Mississippi River sunsets in the nation.