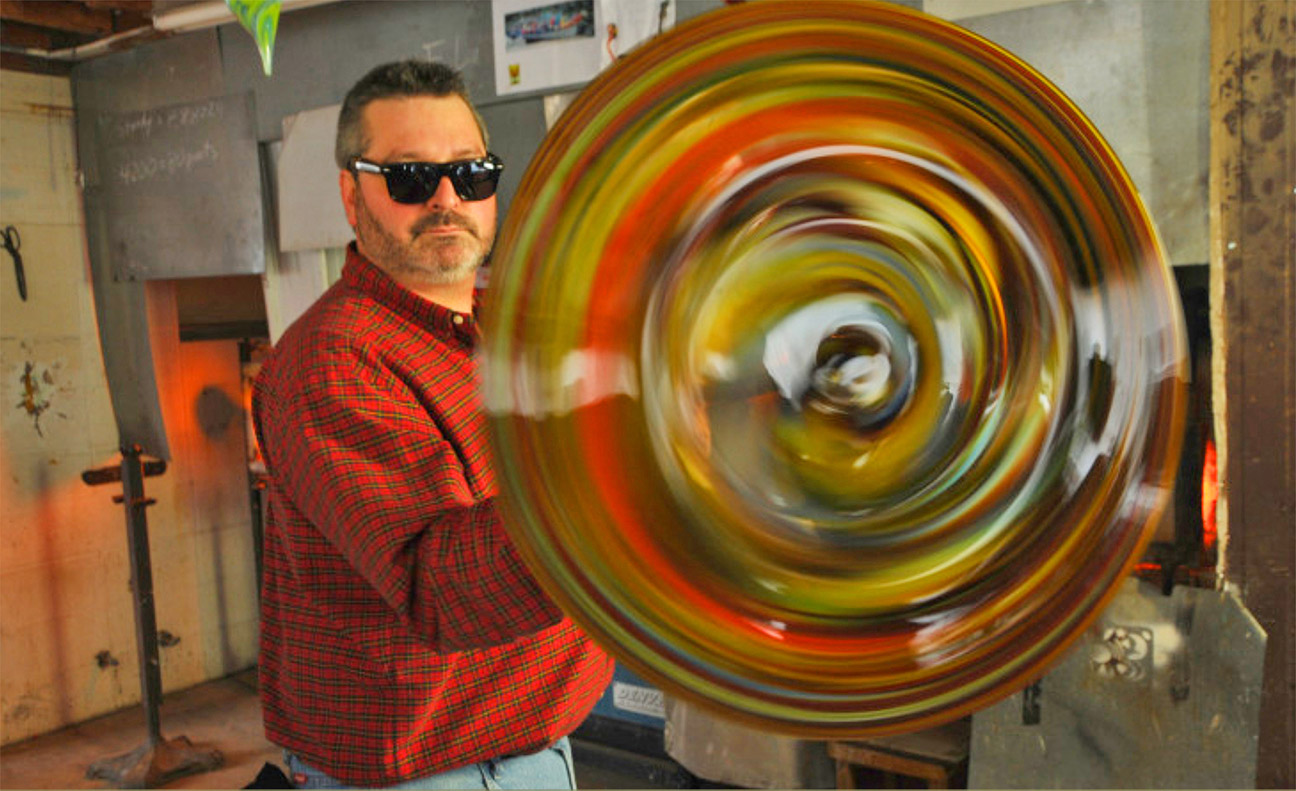 Even as a child growing up in Pine Bluff, Arkansas, James Hayes wanted to be an artist. After graduating from Pine Bluff High School (“Go Zebras!” cheers Hayes), he attended Hendrix College in Conway where he “studied every art form available,” including painting, sculpture, printmaking, and photography. In 1988, he graduated with a degree in art.

“I always knew I’d be an artist, and I took my dad’s advice to supplement that with learning some business and marketing,” Hayes says. “He wanted to make sure I could succeed.”

Three months later he discovered glassblowing at the Arkansas Arts Center Museum (recently renamed the Arkansas Museum of Fine Arts) in Little Rock, and the creative fires were lit.

“The heat, the fire, the molten glass… it was an adrenaline rush,” Hayes says. “And glass is ready to sell within 12 hours. I knew this was it.”

Hayes draws inspiration for his art glass from nature, color combinations in fashion and interior design, his own experiences, and pure chance.

“My art is playful, adventurous, colorful and distinctive,” he says. “When I make something, I always begin with the end in mind. However, during the glassmaking process, sometimes the glass has a mind of its own and it turns out even better.”

To further hone his craft, Hayes has been fortunate to study across the world, including spending time with socially engaged hot glass sculptor John “Sleepy” Moran in Ghent, Belgium, and with Mexican artists Einar and Jamex De La Torre at the Pilchuck Glass School near Seattle. He has also studied glassblowing in Murano, Italy; Paris, France and the Glass Furnace in Istanbul; taken classes at Urban Glass Brooklyn in New York; and learned techniques at New Town Plaza in Hong Kong.

Hayes’ continuing passion for travel informs both his business model and his art, and he is definitely in demand. His everyday schedule is packed with appearing at Art on the Square in Bentonville, Arkansas; giving glass blowing demonstrations; and doing pop-up shows and blowing glass at his gallery in Pine Bluff, the James Hayes Art Glass Company. He also travels extensively across the United States to install glass chandeliers and panels and is comfortable working on a grand scale.

“I am fortunate to get many commissions to create and install my glass,” says Hayes. “Recently, I installed several chandeliers in a medical facility in Kentucky, and I am working on a chandelier and glass wall plates for a large casino.”

To date, his biggest chandelier is at the University of Arkansas in Hope.

“It’s 15 feet long and took four days to assemble,” he says. “Another major chandelier is at the Arts & Science Center [for Southeast Arkansas] in Pine Bluff.”

Hayes has worked on numerous solo and group projects over the years, including glass award statues for dozens of corporations and nonprofits, has been featured in Southern Living and appeared on the cover of At Home in Arkansas magazine. He has been honored with an invitation from the White House to design a Christmas tree ornament and in 2007, he created the ornaments for the James Hayes Christmas Tree at the Arkansas Governor’s Mansion.

Compared to other art forms, glass has a quick production time, and part of the appeal is the immediacy of the result.

“Unlike pottery where you have to check it, and heat it up some more, and check it again, glass is quick,” Hayes says. “It’s like Christmas every day.”

In addition to popular James Hayes glass items available all year such as vases, bowls, stemware, jewelry, centerpieces, “standy chandies” (chandeliers mounted on a rod affixed to a metal base), other lighting fixtures, and commissioned award statues, Hayes also specializes in everything Christmas. He followed advice from longtime friend and mentor Bo Clinton — whose shop carried an extensive line of Hayes art glass — that “the more you have, the more you’ll sell.” Hayes creates a dazzling array of ornaments and baubles especially for the holidays.

The reindeer figurines feature recycled copper antlers that are twisted and inserted into the hot glass. When cool, Hayes gently unwraps the copper and then fashions them into recognizable antlers.

At this stage of his career, each piece of Hayes art glass is a unique and treasured keepsake. Many of his ideas come from clients, vendors, and customers, and Hayes loves discovering unique and fun variations on traditional glass figurines.

“The more unusual the ornament, the more people love them,” he says.

Hayes glass art can be found on his website gallery and at retail locations across Arkansas and at select stores in Louisiana and Tennessee.