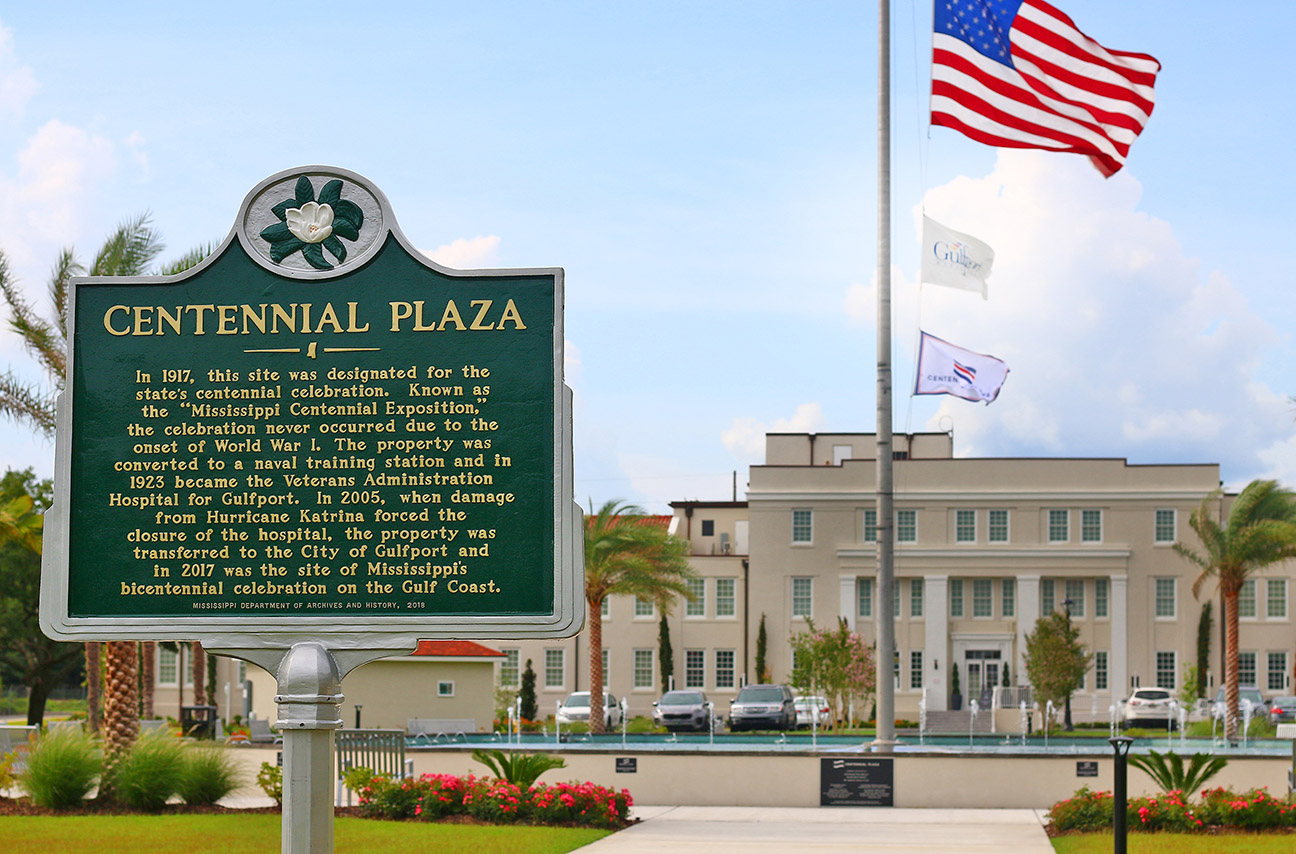 With an illustrious history that dates to 1917, the Centennial Plaza Resort has been reimagined as the Gulf Coast’s newest spring break destination.

Mississippi’s coastline packs many beautiful and exciting locations into a mere 44 miles. Twelve superb cities and towns have so many hidden gems that the area has been often called “the Secret Coast,” and with spring break around the corner, the secret is sure to be not-so-secret much longer. The perfect base of operations to see it all is the new Centennial Plaza Resort, ideally situated in Gulfport almost exactly halfway down the beautiful white-sand beaches.

Mississippi Department of Archives and History records show the 48-acre resort site on US Hwy. 90/Beach Boulevard was originally developed to celebrate Mississippi’s centennial in 1917, but the outbreak of World War I sidelined those plans. In the 1920s, a large hospital for military servicemen was constructed, including the main hospital, an infirmary, an administration building, nurses’ residence and a chapel, and christened Gulfport Veterans Administration Medical Center. The facility operated from 1923 until 2005 when Hurricane Katrina devastated the Gulf Coast.

In 2010, the property was recognized as a Mississippi landmark and deeded to the City of Gulfport, which renamed the complex Centennial Plaza. Shaded by live oaks and magnolias, the 10 surviving Spanish Colonial Revival buildings have copper gutters, handmade roof tiles, and arched wooden windows. In 2014, the property was also added to the National Register of Historic Places.

The property is now the area’s newest family and business traveler’s destination. The Grand Centennial is an upscale boutique hotel housed in the beautifully restored main hospital building and the wing behind it. Centennial Plaza Resort boasts 220 rooms.

In the main lobby’s Grand Centennial Wine Bar, guests can sip premium wines or partake from the full bar featuring modern takes on Prohibition-era classic cocktails and a menu of delicious small plates. South-facing rooms in the main building overlook a 25,000-gallon Bellagio-style dancing water fountain with color-changing jets choreographed to popular songs, not to mention the Gulf beyond.

The Blue Marlin, formerly the nurses’ residence, has been reimagined as a casual fine-dining restaurant where fresh-from-the-sea entrées are only a few steps away from the front door. A taste of the Gulf Coast includes the smoked fish trio appetizer, sea scallops with grilled sweet corn and crispy pancetta, pan-seared trout, Mahi-Mahi or fresh Gulf oysters offered seven ways. Meat lovers can choose among Viet-Cajun surf and turf, filet mignon, a 14-ounce ribeye, wood-grilled chicken, or a pork chop with peach barbecue sauce. Sea salt caramel bread pudding is the perfect ending to a luxurious meal overlooking the Gulf. On Saturday and Sunday mornings, the brunch menu is complete with eggs Benedict, crab cakes, shrimp and grits, pancakes, and an Acadian omelet.

The restored Chapel seats 200 and is available for weddings and receptions, family reunions, anniversaries, and other parties. Anterooms may serve as bride or groom dressing rooms, and a side patio serves as a smoking lounge. Centennial Park – about 15 acres of open green space under majestic live oaks – is also available for weddings and receptions, or for festivals, concerts and meetings. The small pond showcases a bridge to the tiny island in its center.

The Biloxi Visitor’s Center, located across from the Biloxi Lighthouse, is only nine miles away and offers the Coastal Mississippi Attractions Pass to eight exciting locations across the Secret Coast. The pass includes admission to three museums (Ohr-O’Keefe Museum of Art, Walter Anderson Museum of Art, and the Maritime and Seafood Industry Museum), two historic monuments (Biloxi Lighthouse and Beauvoir and the Jefferson Davis Home and presidential library), and three hands-on active play experiences for children of all ages (Lynn Meadows Discovery Center, the Pascagoula River Audubon Center, and NASA’s INFINITY Science Center).

The Lynn Meadows Discovery Center in Gulfport is Mississippi’s first children’s museum and offers a History Hotel that teleports guests back to the 1890s, The Port for little fishermen (and fisher-ladies), a climbable sculpture representing the ocean, outdoor walking paths, science exhibits, and much more.

No trip to the coast is complete without a visit to NASA’s INFINITY Science Center in Pearlington. Children and adults enjoy seeing an F-1 rocket engine, building their own inventions, and experiencing out-of-this-world simulators all in one visit.

Other get-out-and-get-moving spring break activities along the Mississippi Gulf Coast include scaling the rock-climbing wall at nearby Margaritaville Resort Biloxi paddle boarding, skateboarding, or yoga classes at Wild Flier in Ocean Springs, and golfing any of the Secret Coast’s 18 championship golf courses. Runners may need to limber up for the Bay St. Louis half-marathon March 21, a fundraiser for local law enforcement and Hancock County Friends of the Animal Shelter. A 10k is also available.

Prefer to enjoy the ocean? In addition to old favorites like seashell hunting, swimming, and sunbathing, consider the Biloxi Shrimping Trip, a 70-minute living marine adventure cruise led by Captain Mike and Deckhand Dave. Drag for shrimp, learn about marine life, and, if you’re lucky, watch dolphins race your boat. From mid-March to early August, enjoy any of three shrimping tours daily (reservations: 228-392-8645). Also available for water and beach lovers are deep sea sport fishing, parasailing, a trip aboard a Biloxi schooner or a relaxing day under a beach umbrella on the Gulf’s barrier islands via the Ship Island Ferry.

With 55 percent of frequent travelers saying they travel primarily to discover new experiences, cultures, lifestyles, food and places, Mississippi’s “Secret Coast” and The Centennial Plaza Resort are perfectly poised to surprise and delight.