Lighting Up the
Holidays 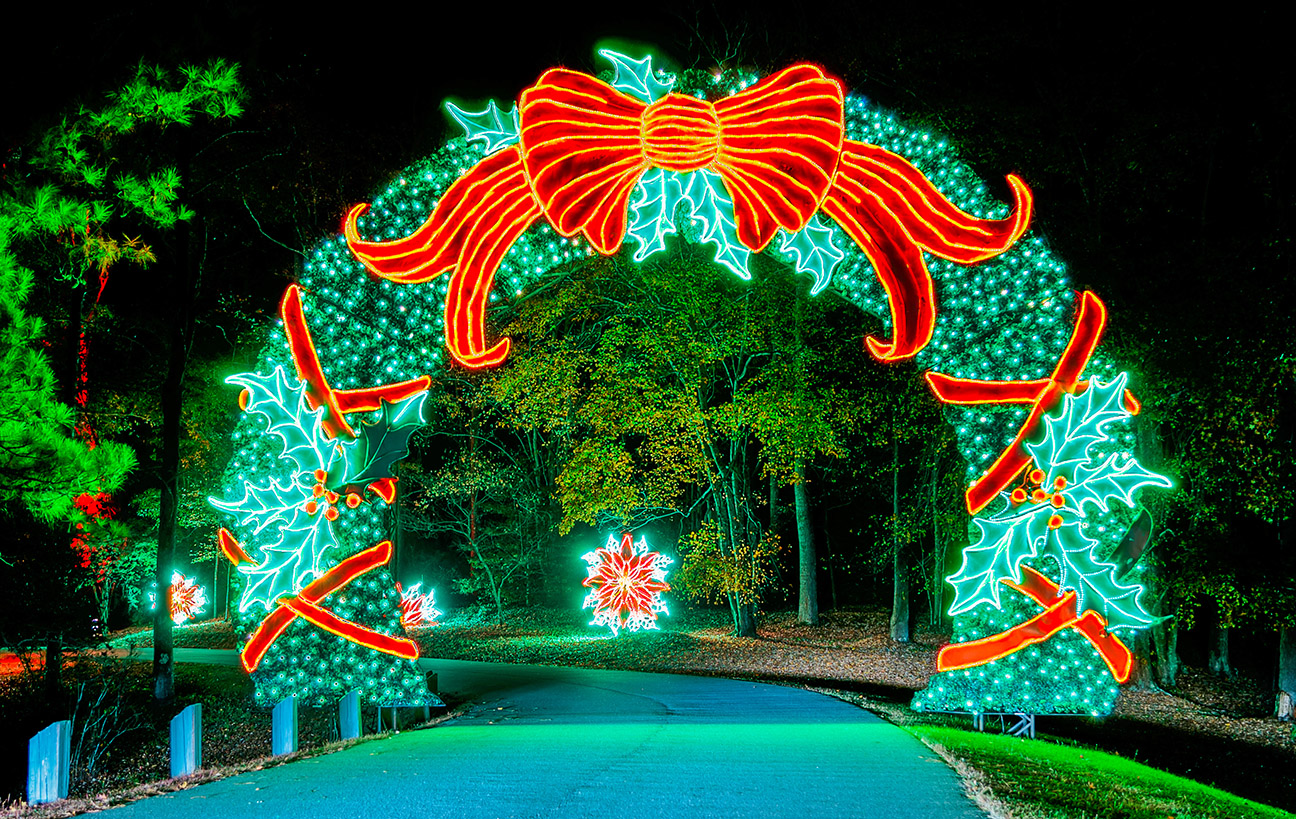 Brookgreen Gardens outside Myrtle Beach transforms into a holiday spectacle with its annual ‘Nights of a Thousand Candles.’

The Atlantic beachside town of Myrtle Beach, S.C., continually ranks as a top vacation destination. Visitors go for fun in the sun, but the area also offers a lot in the way of holiday entertainment, making it ideal for a winter escape. In fact, a short drive south of Myrtle Beach lies one of the region’s most notable and historic attractions.

Sitting on more than 9,000 acres, Brookgreen Gardens encompasses not only botanical gardens, but also the largest collection of American figurative sculpture in the country, a Lowcountry History and Wildlife Preserve, and a Lowcountry Zoo.

There’s so much to take in at the attraction located in scenic Murrells Inlet, it’s almost impossible to see all during one visit. Even the most ambitious visitors are likely to get delayed in the different landscaped gardens when they slow down to admire the many sculptures around every turn and or to check out the animals in the accredited native wildlife zoo.

But when the holidays arrive, Brookgreen Gardens takes celebrating the season to the next level. On select nights between Nov. 27 and Dec. 31, the Brookgreen hosts “Nights of a Thousand Candles,” which lives up to its name in spades. From 4 p.m. to 9 p.m., guests can wander the grounds amid more than 2,700 hand-lit candles and millions more twinkling lights crafted into elaborate displays among the large sculptures, mature trees, and blooming flowers. From stringed lights lining the branches of the 250-year-old live oak trees along Live Oak Allée to the hanging luminaries in the Brenda W. Rosen Carolina Terrace Garden to the floating candles in the water features, the gardens are aglow from every angle.

​ It’s a far cry from the original event, which took place in 1999. Originally called “Luminaria Celebration,” the initial event was just two nights and attracted a crowd of barely more than 500 people. In the ensuing decades, that number would swell to more than 50,000.

During the month-long event, visitors may enjoy hot cider, cocoa, or wine as they stroll through the gardens. In addition, there will be food trucks on site offering a variety of tasty treats. Throughout the evening, live music fills the air with carolers, a harpist, and a hand-bell ensemble, plus, every night a live musical performance will take place at Brookgreen’s open-air Leonard Pavilion.

As if that’s not enough, visitors can see artist Bruce Munro’s expansive and renowned light art installation, “Field of Light,” within the gardens. This exhibit features more than 12,000 stems of light that slowly change colors, creating a shimmering, mesmerizing effect.

Not surprisingly, “Nights of a Thousand Candles” has received a number of accolades that include being named “Best Christmas Lights in South Carolina” by Travel+Leisure Magazine and receiving the 2018 Charles A. Bundy award for excellence in tourism from South Carolina Parks Recreation and Tourism.

Interestingly enough, Brookgreen Gardens was never intended to be open to the public. It began as a private escape for owners Archer Huntington and his wife, noted sculptor Anna Hyatt Huntington. The couple bought the property in 1930 as a retreat for Anna, who had been diagnosed with tuberculosis and wanted a quiet place to recover.

Just a year and a half later, though, those plans had changed. On July 13, 1931, the property was incorporated under the laws of South Carolina as a private, not-for-profit corporation. The goal for Brookgreen Gardens was to collect, exhibit, and preserve three distinct components: American figurative sculpture, plants of the Southeast, and animals of the Southeast. In doing so, it became America’s first public sculpture garden.

Within the botanical gardens, you’ll find individual gardens such as the Brenda W. Rosen Carolina Terrace Garden, the Palmetto Garden, the Muses Garden, the Huntington Sculpture Garden, and the Dorothy P. Peace Garden Room for Children.

More than 2,000 works by 430 artists are seamlessly displayed among the flowers, greenery and trees, providing a beautiful complement to nature. There are also indoor galleries, including The Bleifeld Gallery and the Rainey Sculpture Pavilion, that showcase smaller sculptures, paintings, etchings, and other works.

Accredited by the Association of Zoos and Aquariums, the Lowcountry Zoo is home to native animals to the region that were either bred and raised in captivity or have a major disability due to injury and can no longer survive in the wild. Some of the animals you can visit include alligators, grey and red foxes, bald eagles, white-tailed deer, and river otters.

Safety measure
This year’s pandemic continues to affect public outings, and a visit to Brookgreen Gardens for the “Nights of a Thousand Candles” is no different. To help protect both visitors and staff, Brookgreen has implemented several COVID-19 safety measures to promote social distancing and help with crowd control.

For this year, nightly admission has been reduced by 50 percent; however, to accommodate as many guests as possible, Brookgreen has doubled the event’s number of nights to offer the same number of tickets as previous events. In addition, guests are strongly encouraged to practice social distancing at all times and wear masks in the outside gardens. Masks are required in all indoor venues.

Pets are not allowed on the property but service animals are welcome.

Visiting Brookgreen Gardens for “Nights of a Thousand Candles” is sure to be a momentous occasion, a holiday celebration like no other.