The Styles of Barbecue 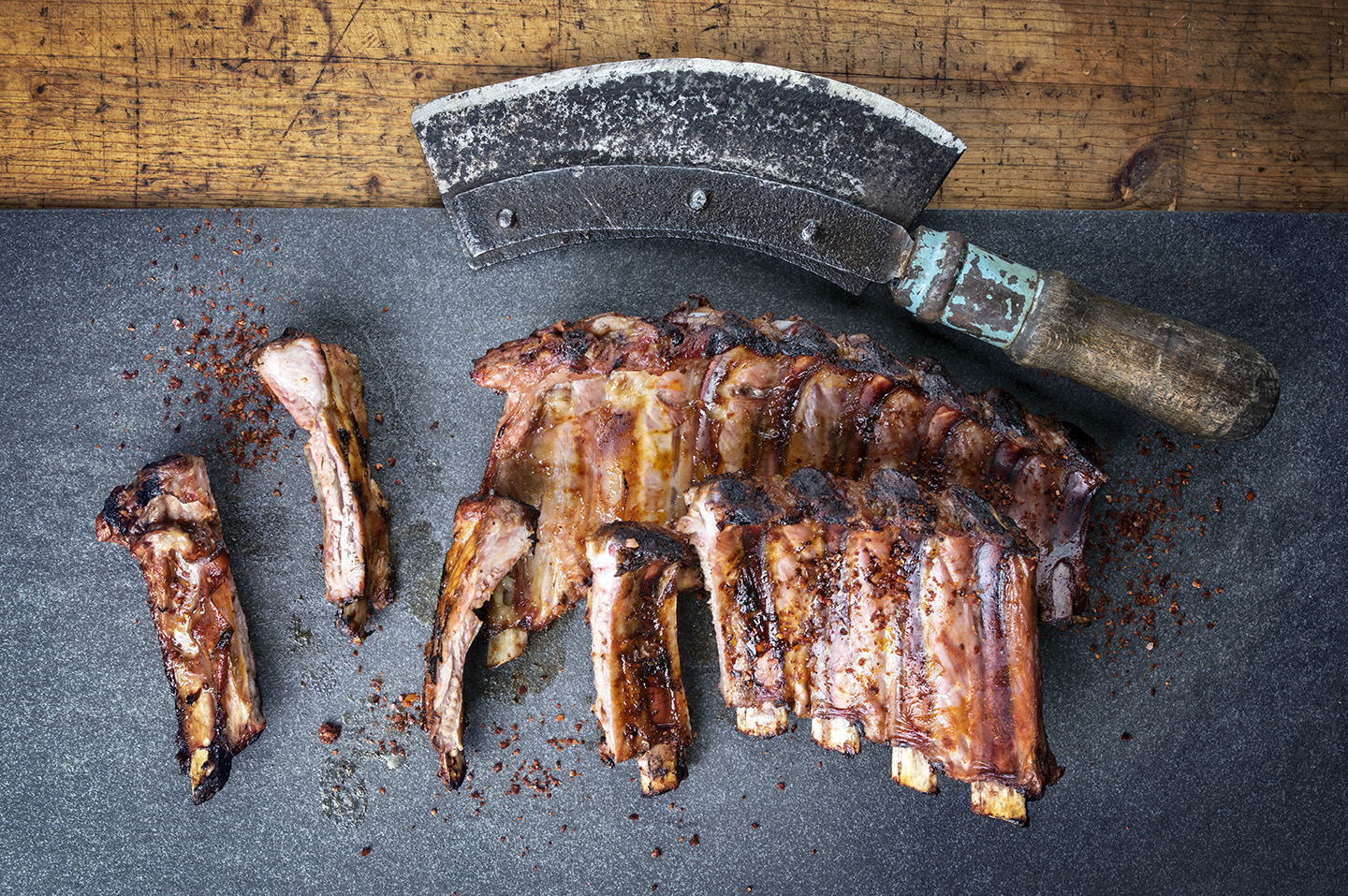 Barbecue styles vary across the South and everyone has a favorite whether it’s the flavorful Memphis rubs to the lip-puckering Carolina sauces to the holy trinity of Texas meats.

Barbecue. Has any word in the Southern lexicon been so controversial? Southerners will argue the merits of wood selection, cook times, to-rub-or-not-to-rub, and sauce styles until they are red in the face. Then, they’ll share a rack of ribs, a few slices of brisket, the choicest pieces of the hog with their former foe and declare how the bite was the best barbecue they’ve had…that day.

​ To the outsider and the un-initiated (read: newly-transplanted, formerly-Northern neighbors who haven’t been invited to a pig pickin’ yet), the passion for barbecue in the South and the arguments over favorite styles is the stuff of madness.

​It’s easy to understand the confusion. The South is rich in barbecue tradition and each region approaches ‘cue a little differently. If you didn’t grow up in it, barbecue becomes a blur and the regional differences and nuances are lost. Until you know, that is. Today’s the day. This is your master’s class in meats, your seminar on smoke, and when you’re finished reading, you’ll be hungry and primed to find the best ‘cue that suits you whether you live in Memphis, South Carolina, Texas or anywhere in between.

The Center of the Barbecue World

​ As much as North Carolina claims to be the “Cradle of ‘Cue,” so does South Carolina. And Georgia. Virginia, too. But the truth lies somewhere to the far south, in the Caribbean.

​ “Barbecue began as barbacoa, and that started on the Caribbean islands where native tribes would prepare meat over hot coals, low and slow like we do now,” says Melissa Cookston, seven-time world barbecue champion and owner of the Memphis BBQ Company, which has locations in Horn Lake, Miss., and Dunwoody, Ga.

​ Island origins aside, Cookston, a Mississippi Delta native who grew up eating barbecue sandwiches with her grandfather and taking weekly trips to Memphis for ribs with her mother, claims this river city is the “geographic center of barbecue” in America and she’s got a point.

​ “Without a doubt, Memphis is the geographic center of barbecue,” she says. “We pull our flavor profile from the styles that surround us, brining in the tangy vinegar sauce from North and South Carolina; the salt, pepper, and heat of Texas’s sauce and seasoning; a bit of sweetness from Kansas City.”

​ Add those together and you get Memphis. Or you start to.

​“Memphis-style barbecue is the most flavorful in the world,” Cookston says. And it’s not just because of the sauce. “The secret’s in the rub.”

​ Every piece of barbecue, whether it’s a whole hog like Pitmaster Rodney Scott cooks in the lowlands of South Carolina, the brisket coming off Texas pits, or chicken in Alabama waiting for a dunking in that ubiquitous white sauce, gets seasoned. But it’s the rub that distinguishes Memphis from other styles and is a difference maker like no other.

​ “It’s a convoluted sauce. Lots of ingredients,” Cookston says before rattling off the dozen or so spices that flavor her rub. “Onion powder, granulated garlic, salt, ground black pepper, and red pepper flakes, dry mustard, and, of course, turbinado sugar. A lot of people like brown sugar, but it caramelizes at a lower temperature, so I use turbinado and I love the results.”

So do her fans. Her rub serves to season her ribs, pulled pork, brisket, and her sauce. “I serve a tomato-based sauce, spiked with plenty of vinegar and my rub, giving you a real consistency in flavor,” she says.

​ Barbecue fanatics often think of dry rubbed ribs when they think of Memphis, but Cookston serves hers dry – seasoned only with the rub – wet – seasoned with the rub and sauce – and muddy. Muddy ribs are sauced then dusted with more rub for a triple layer of that signature Memphis flavor.

​ Not every style adheres to the rub-centric notions of Memphis. Rodney Scott of Rodney Scott’s Barbecue in Charleston, S.C., and Birmingham, Ala., cooks whole hogs in the tradition of the coastal Carolinas. That means he eschews the rub and seasons everything late in the game, when the hog is flipped meat-side-up. A healthy dose of salt, pepper, and smoke, plus a few other ingredients flavor Scott’s hogs before he begins to mop them with the thin, distinct sauce he grew up with. In 2018, Scott was named Best Chef in the Southeast by the James Beard Foundation, winning what is essentially the Oscars of food for his whole hog cooking, so he’s a man who knows seasoning and sauce.

​ “When the sauce is right it makes you want to kiss. It’s got a little twang that makes you pucker up and blow a kiss,” Scott says with a laugh. “It’s not too sweet, not too spicy.”

And it’s not the mustard sauce many think of when South Carolina ‘cue comes to mind. “That mustard-based sauce, it’s found in a pocket in the central part of the state,” Scott explains, “and further out in the mountains there’s a sweeter, tomato- or ketchup-based sauce, but I stick to what I grew up with.”

​In North Carolina, traditions are similar, minus the mustard. On the coast, barbecue served at places like Skylight Inn, a beacon for barbecue lovers, consists of whole hogs, salt and pepper, and that vinegar-pepper sauce. Move west and you find Lexington-style or Western-Carolina barbecue at places like Lexington Barbecue: shoulders crusted with rub and served with a sweetened, thickened vinegar sauce. In Asheville, Chef Elliot Moss’s Buxton Hall Barbecue serves whole hog and a bevy of sauces that call on the nuances of his native South Carolina as well as the North Carolina traditions.

​ Scott does the same at his restaurants, serving his distinct whole hog, spareribs, smoked chicken, and thin-sliced smoked turkey breast, all with that tangy, twangy Rodney Sauce. At his Birmingham location, Scott took the dive into a sauce that marks Alabama as its own barbecue genre: his take on Big Bob Gibson’s Alabama White Sauce. This mayo-based sauce is prepared by blending Duke’s mayonnaise with apple cider vinegar, salt, white pepper, and some secret spices; whole chickens are pulled from the pit and dunked into the sauce and served. It’s a fabulous flavor combination and elevates the simplicity of chicken to new heights.

​“In Birmingham, I wanted my barbecue to compliment, not complicate, the barbecue traditions that existed,” Scott says. “So, we reworked the profiles of our vinegar and pepper sauces, figured out our take on the Alabama White Sauce, and we were ready to go.”

​ Sauce aside, barbecue comes down to three things: salt, pepper, and smoke.

​ Texas-based Yoni Levin, host of the “Best BBQ Show” podcast and YouTube channel, cooks his own ‘cue but also sits down with pitmasters and barbecue legends from the Lone Star State and wherever his travels take him, exploring the nuances of barbecue regardless of style. Still, he finds Texas ‘cue to be the best.

​ “There are a few things that define Texas barbecue,” he says. “First, the speed of the cook. We’re super slow, cooking for a few hours beyond what you’ll often find in the Carolinas and elsewhere. Second, we season with salt, pepper, and smoke, letting the quality of the ingredients, be it beef brisket, pork shoulder, chicken or anything else, speak for itself. Third, it’s the sauce.”

​ According to Levin, some of the old guard Texas barbecue joints forego the sauce, leaning on the meat alone. “The holy trinity of Texas barbecue – ribs, brisket, and sausage – should be delicious without sauce.”

​ With sauce, which in Texas plays with the balance of tanginess, sweetness, and spiciness, these meats get that extra jolt of flavor.

But Which is Best?

​ Ask Levin and he’ll tell you Texas serves the end-all-be-all of barbecue, period.

​ Cookston says the same of Memphis.

​Scott stands by South Carolina’s whole hog and his lip-puckering sauce and North Carolina stands with him.

​ Which means you have a dilemma on your hands: deciding which style you like, which sauce you love, and which ‘cue camp you fall into.

​Fortunately, Scott sells his rubs and sauces online at www.rodneyscottsbbq.com and his cookbook, “Rodney Scott’s World of BBQ: Every Day’s a Good Day,” due out in March, reveals some of his secrets for crushing ‘cue at home.

​ Cookston’s pair of cookbooks lets you in on her methods and you can order her ‘cue from www.melissacookston.com, and taste her barbecue, sauces and rubs alongside those from legendary pitmasters by ordering from www.thebbqallstars.com.