Luxury Cruising
on the
Amazon River 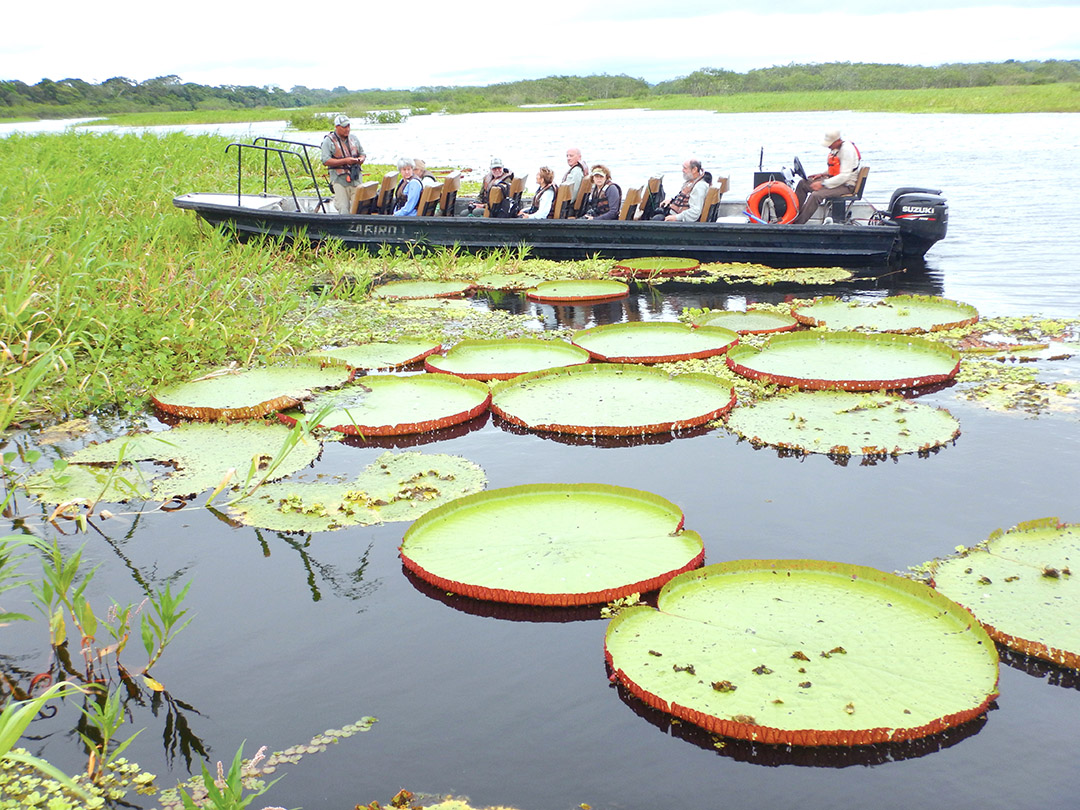 The 38-passenger Zafiro vessel offers a chance to view unique cultures and nature in one of the most isolated places on earth.

A trip to Peru usually means gasping for breath high in the Andes Mountains at Machu Picchu, but for a select few adventurous souls it means gasping in delight at the sight of pink dolphins, howler monkeys, or big-beaked toucans while cruising in luxury on the Amazon River.

The Zafiro, a three-deck vessel itself built deep in the rainforest, is the reason “luxury” and “Amazon River” are not mutually exclusive. The Zafiro is a powerful, somewhat boxy-looking boat that is a mobile island of creature comforts in one of the most isolated regions on earth.

It has air-conditioned cabins with floor-to-ceiling windows for 38 passengers, nice linens, hot water showers, power to recharge electronics, and a crew of 24 that has three chefs, including a baker. Even better, it carries an expedition leader and up to three Peruvian naturalists who seem to know every bird that flies, the cry of every monkey in the trees, and the hiding place of every frog, snake, and caiman.

As comfortable as the Zafiro is, a seven-day trip on the Amazon remains an adventure. Unlike a European riverboat cruise that offers tours of castles and vineyards, the Zafiro delivers two or three mini-excursions a day to search for wildlife, kayak on a placid tributary, fish for piranhas, and meet an honest-to-goodness shaman. These excursions take place on small flat-bottom boats with powerful outboard motors.

International Expeditions, a nature-oriented soft-adventure firm in Birmingham, Ala., organizes approximately 16 weeklong trips on the Zafiro every year.

“We attract interesting people who want to do more than check off a bucket list item,” says Steve Cox, founder and executive director. “They really want to get to know a place, and there is much to learn in the Amazon.”

When my wife and I were aboard, our fellow adventurers included a Virginia couple and their children ages 6 and 8, a California mother-daughter duo (the mother, definitely past 70, jumped right in when a chance to swim with pink dolphins came along), a couple of serious nature photographers, and a baby boomer couple.

The destination intrigued all of us. Cox notes that the word “Amazon” alone is a magnet. The region is not so much inherently dangerous as it is overwhelmingly big. The Amazon River system touches eight countries and drains an area the size of the continental United States.

The Amazon River has five major tributaries, and the Zafiro’s route includes the confluence of the 1,100-mile-long Ucayali River and the 879-mile-long Marañón River, the point where “Amazon” appears on maps.

The cruise starts and ends in Iquitos, the world’s largest city unreachable by road. The river already is two miles wide when it gets to Iquitos and has 2,200 miles to go to reach the Atlantic Ocean. Grasping the scale of the region is almost impossible. Cruise groups assemble in Lima and jet over the Andes to get there.

Naturalist Juan Tejada, an Iquitos native, knows his home territory as well as any Southern country boy knows his own hunting and fishing grounds—perhaps even better, since Tejada has so much biological diversity to learn. His love of the Amazon is infectious.

“It’s as big a thrill to see a little red-capped cardinal as it is to see a toucan colorful enough to be the model for the Fruit Loops cereal box,” Tejada said, recalling his early years of learning how to observe wildlife and how to mimic their calls. He happily coaxes monkeys into view, can tell the difference between the cry of a red howler monkey and that of a donkey bird (they are very similar), and can deliver an impressive rat-a-tat-tat machine gun impression to a banded kingfisher.

In my week with Tejada and his fellow naturalist Edgard Vascones, we saw sloths, caimans, 11 types of monkeys, two dolphin species, frogs, toads, butterflies, an anaconda, a red-tailed boa, scores of bird species, a red-rump tarantula—and that was just at the start of our journey.

International Expeditions provides an animal checklist, and debriefing sessions in the Zafiro’s lounge were opportunities to recall exactly what we’d seen. At the start of the week, the list seemed impossibly long; at week’s end, it was astounding the variety and quantity we had seen, some extremely up close.

To Tejada and Vascones, the objective of a Zafiro cruise is showcasing this immense ecosystem, and part of that is getting to the Pacaya-Samiria National Reserve, a protected region the size of Belgium. Only about 3,000 people a year sign ledger books at one of the reserve’s seven ranger stations.

At 3.7 million acres, the reserve is seven times bigger than Great Smoky Mountains National Park, yet a Zafiro day trip into the reserve featured a breakfast aboard our motorized skiffs that would have made any five-star resort proud—hot coffee in ceramic mugs, cold orange and papaya juice, wicker trays filled with omelets, cereal, chicken salad in soft rolls and a surprise piece of chocolate cake—all under a tropical sky and with a rainforest backdrop.

That set the stage for seeing a three-toed sloth, a tree full of capuchin monkeys, long-ear bats, squirrel monkeys and a howler monkey, all before lunch.

There’s a human side to a Zafiro trip, too. International Expeditions has built relationships with seven villages, and that permits meeting people such as a shaman named Roman and his apprentice Sergio. To Roman, the rainforest is a living pharmacy that helps him care for people in several villages.

From Roman’s medicine cabinet: One plant treats bronchitis, another produces an elixir to combat pinkeye, and another that looks like philodendron produces antivenom for snakebites. Vascones tells a harrowing tale of how the antivenom saved his father’s life.

Another village highlight is meeting a group of children in their one-room school. Zafiro passengers are encouraged to bring simple gifts (crayons, pencils, writing pads, small calculators) for the children. The reward for my group came when the kids grabbed our hands and proved that “The Hokey-Pokey” transcends cultures.

Back on the Zafiro, all crewmembers are cross-cultural educators who want their passengers to learn about Peru. Chef Jose Rabanal explains the Peruvian dishes he serves, the on-board masseuse is an inspiring dance instructor, and more than a fourth of the crew formed a very tight band that performs almost nightly. The musicianship of an engineer who plays a 10-string Peruvian instrument called a charango would have impressed Ricky Skaggs or Bill Monroe.

Every day on a Zafiro cruise dawns with the expectation of seeing amazing sights while still pinching yourself because you are traveling in luxury.