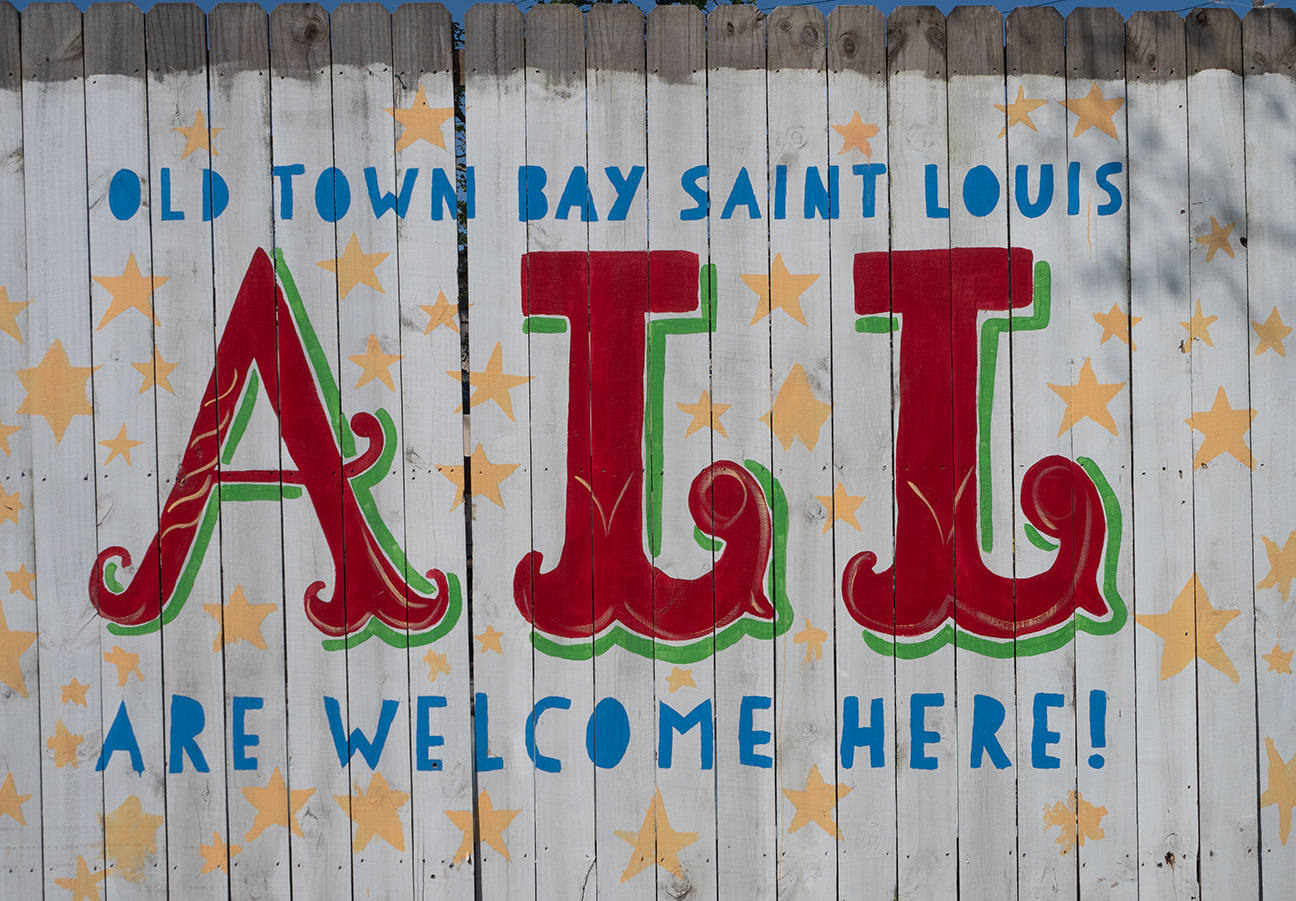 All Are Welcome Here

Ann Madden’s mural reads “Old Town Bay St. Louis, All Are Welcome Here.” Just a half-mile away stands the 100 Men Hall, a landmark on the Mississippi Blues Trail from the days of segregation. When Rachel Dangermond toured the 100 Men Hall in 2018, she knew in that moment that she intended to buy the Hall and move in there with her son.

Dangermond and the subsequent nonprofit 100 WOMEN DBA that she helped form aim to make both the hall and Bay St. Louis places where all are welcome.

​ The 100 Men Hall is nearly 100 years old. Twelve African American men formed the 100 Members Debating Benevolent Association in 1894 and their bylaws stated as follows: “the purpose of this Association is to assist its members when sick and bury its dead in a respectable manner and to knit friendship.” Their meeting hall, called the 100 Men Hall, became a place for Bay St. Louis’ Black community to gather for life’s celebrations.

​ “The 100 Men Hall tells a more nuanced story than what you will hear about Mississippi in this country,” Dangermond says. “It is a testament to the resilience and self-reliance the African American community had (in order) to create a place of civic activism and community joy in the midst of this country’s dark times of Jim Crow and segregation.”

The hall itself has proven resilient. Hurricanes Camille, Katrina, and Zeta battered the building, but it survived. Over the years, the Hall hosted everything from weddings to bingo games. Most notably, it was a music and entertainment venue along the Chitlin Circuit — a series of Black-owned juke joints, dance halls, music venues, and nightclubs that operated during segregation from the 1930s to 1960s.

​ Jazz and blues singers played New Orleans on the weekends and continued east on the Chitlin Circuit during the week. Many greats entertained on the 100 Men Hall’s stage before they became famous. A blackboard lists dozens of entertainers, including B.B. King, Chuck Berry, James Brown, and Ray Charles. The whole-wall mural outside, painted by Wendo Brunious and JoLean Barkley, adds Etta James, Guitar Bo, and local musician Harry Fairconnetue to the list of legends.

​ When Dangermond bought the 100 Men Hall, she envisioned its return to a gathering place for the entire Bay St. Louis community. And the list of musicians has grown with outdoor performances during the pandemic.

Beyond returning the Hall to a community center and music venue, Dangermond wanted to resurrect the nonprofit that had been the organization behind the building, and to honor those who had worked in the background.

“After years of community work and activism, I knew in my heart that it is the women who do kitchen table organizing that make a difference in our communities, so the 100 WOMEN DBA was born,” she says.

​ Formed in January 2019, the 100 WOMEN DBA is 75 members strong. Their dues pay for the building’s upkeep and the programs they’re passionate about. The group’s original mission centered around helping underrepresented women of Hancock County start and grow their own businesses. But their mission isn’t static. It’s responsive to the times and the current environment.

​ More immediate concerns and community needs shifted the group’s focus in the past year. The 100 WOMEN DBA hosted listening booths to allow people to talk about the pandemic and the all-too-prevalent violent loss of Black lives. Intolerance hit close to home when a young girl was handed a racist doll at a parade. The 100 WOMEN DBA responded by making her queen of their Mardi Gras krewe.

​ Dangermond and the 100 WOMEN DBA further supported racial tolerance on the June 19 celebration of the emancipation of the enslaved after the Civil War.

“The best show of unity our 100 WOMEN DBA had was [on Juneteenth] when we gathered 250 people to form a Women’s March for Progress to speak out against the injustice and to support Black Lives Matter,” she says.

​ With their Food for Youth program, the 100 WOMEN DBA provided nonperishable food for children at risk for hunger and out of school due to the pandemic, filling a need normally met by school meal programs. Beginning in 2022, they’ll be awarding a scholarship to a young woman of color graduating from each of the two Hancock County high schools.

​ As Dangermond and the 100 WOMEN DBA hatch plans to elevate the community from their kitchen tables, embrace cultural differences, stand in solidarity against injustice and inequity, and knit friendships they’re showing all are welcome. Fellow 100 WOMEN DBA member, Ann Madden, painted a mural that rings true.