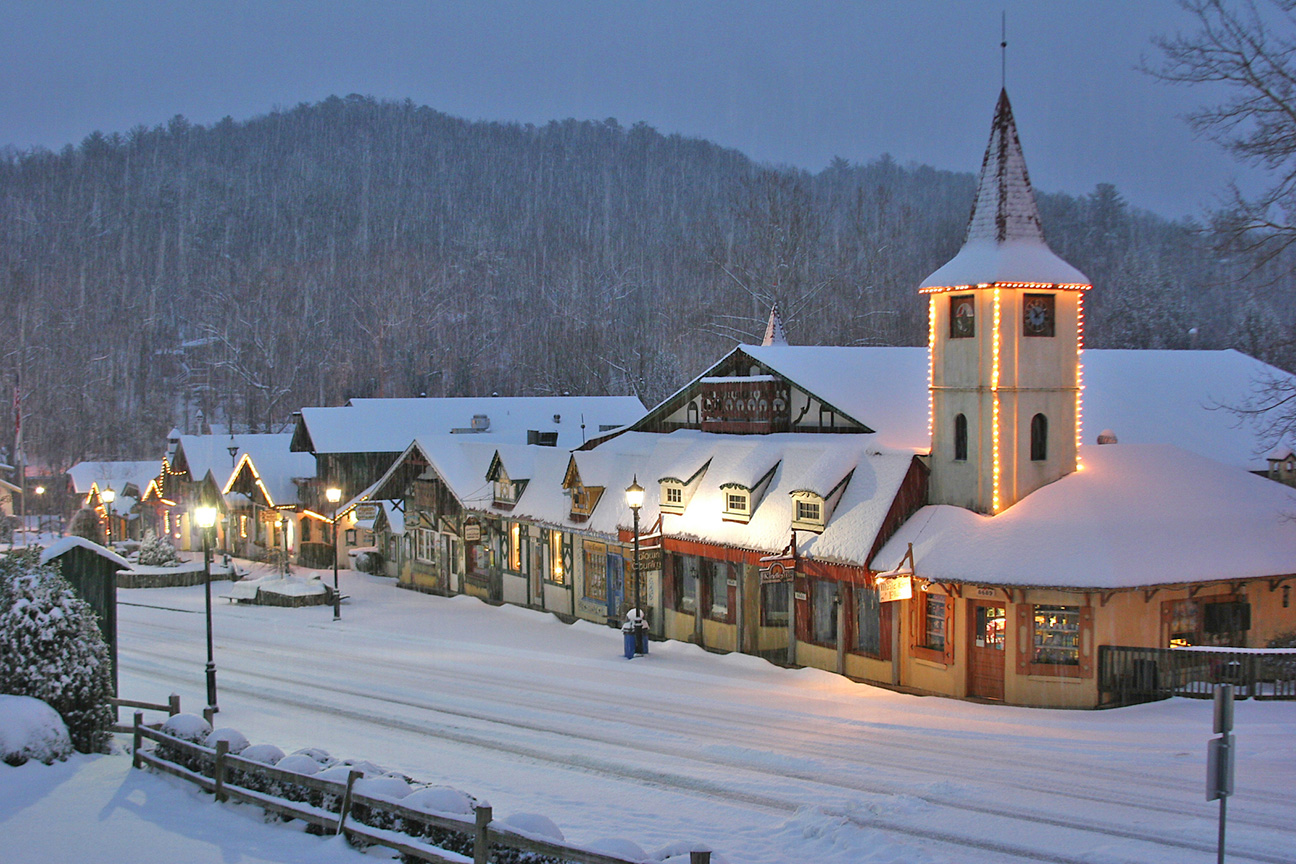 Picture-perfect and holiday ready, this Alpine village nestled in Georgia’s Blue Ridge Mountains is the setting for a Lifetime movie to air Dec. 21.

The postcard-perfect Alpine Helen, Georgia, looks like a mountain town in Bavaria, Germany, and that’s exactly what its community leaders intended 50 years ago.

Officially called Alpine Helen, the small town on the banks of the Chattahoochee River has had an amazing transformation story. Like many other small Southern towns in the 1960s where industries had left or declined, Helen had seen better days. But a small group of community leaders got together and discussed ways to improve the town, which in 1968 consisted of 10 buildings.

Hoping to increase tourism in the area, they talked to Georgia artist John Kollock about adding some “color” to Helen. Kollock, who had been stationed in Germany with the U.S. Army, had fallen in love with Bavaria. The Blue Ridge Mountains around Helen reminded him of Europe. He took pictures of the buildings and returned to his studio where he “alpinized” the exteriors in drawings.

“The business owners paid to have their own building facades changed to fit the Alpine Bavarian theme that Kollock had shown in his drawings,” said Jerry Brown, executive director for the Alpine Helen/White County Convention and Visitors Bureau.

If celebrating Christmas in Germany – where many of our favorite holiday traditions began – is not in your travel budget this year, you can still get an authentic taste of Bavaria without leaving the American South. Helen is a quintessential Alpine village complete with cobblestone streets, Old-World towers, gingerbread-style buildings, and Christmas decorations that have enticed Hollywood producers to come calling.

In fact, visitors last April got a taste of what Helen looks like during the holidays because decorations were put back in place for the filming of “Christmas Love Letter,” a Lifetime Films movie that will air on Dec. 21. This is the second holiday movie to use the picturesque town in the storyline. In 2017, a Hallmark Christmas movie, “The Sweetest Christmas,” starring Purvis, Mississippi native Lacey Chabert, took place in Helen although most of the filming actually happened in Vancouver, British Columbia.

The economic impact of this year’s “Christmas Love Letter” was more than a half-million dollars when it was filmed on location last April and May, according to the producers. And it’s a gift that will keep on giving.

“I’m certain that after “Christmas Love Letter” airs the county and city will benefit from additional visitation and further economic impact for years to come,” says Brown.

And that’s exactly what Helen’s early leaders envisioned with their unusual dream of infusing some German flavor into their town in January 1969, when renovations to exterior buildings began. By September of that same year, Alpine Helen hosted its first promotional event – the Chattahoochee Trout Festival and Alpine Hoedown. Today, the area receives more than 1.6 million visitors annually and is the third most visited city in Georgia, behind Atlanta and Savannah, according to Brown.

Many new visitors come to Helen thinking it was a community of German immigrants who settled the town but that wasn’t the case. It was an all-American community full of visionaries.

“Helen had about 250 residents then,” says Paula Ash, who co-founded the Helen Arts & Culture Center with a group of friends. “Many of the builders who were doing the construction had served in the military in Germany and had a good idea of what the town would eventually look like.”

She remembers Austrian Bernd Nagy falling in love with Helen and moving there to open the House of Tyrol, which for many years sold Austrian and German merchandise. The Link family built the Old Heidelberg restaurant and other relatives from Germany followed.

Bavaria is certainly well represented now with four authentic German restaurants among the 29 total eateries in town. Auril and Doina Arodan emigrated from Baden-Wuerttemberg about eight years ago after visiting Helen and realizing the town needed a fine-dining German restaurant. A master chef, Arodan prepares German specialties like Tafelspitz (slow-cooked beef) and Holzfaellersteak (pork loin), bringing a taste of Old-World Germany to the couple’s Bodensee Restaurant on Munich Strasse in downtown Helen.

Part of the Helen “experience” includes having a pastry or gigantic pretzel at Hofers Bakery and Café, also one of my favorite breakfast places. Horst and Gerda Hofer, who came to the U.S. in the late 1950s from Schwabach, Germany, opened the Helen bakery in 1991 after running a successful bakery chain in Atlanta.

OTHER TIMES OF YEAR

While the holidays are a delightful time to visit Helen, the city also offers so much to do all year, especially for nature lovers. Hiking trails lead to the glorious Anna Ruby Falls and through Unicoi State Park. On summer days, the Chattahoochee River is filled with people lazily floating on tubes right through the downtown area.

Art lovers will enjoy visiting the Folk Pottery Museum and The Gourd Place, both located in nearby Sautee, Georgia. The Sautee Nacoochee Arts Center features works from 47 juried artists in the area and attracts more than 47,000 visitors annually.

The newest attraction is the Georgia Mountain Coaster, which feels like a ride on a bobsled without the snow. This unique ride heads up a mountain ridge and back down through switchbacks and roundabouts before dropping riders in downtown Helen. The rider controls the speed, so it can be as breathtaking as your courage will allow.

Alpine Helen/White County has done an excellent job of promoting the authentic sites near town. The Hardman Farm Historic site is an educational experience for all ages. “Hardman Farm was years ahead of its time and very innovative,” says current farm manager Will Wagner. In December, the Hardman house will feature period holiday decor and docents dressed in their finest 1870’s garb.

No matter what time of year you visit, it’s just what Helen’s far-sighted leaders imagined for their beloved town 50 years ago.